Home Culture The Classic Vietnam-Era Documentary “The War at Home” and Its Lessons of... 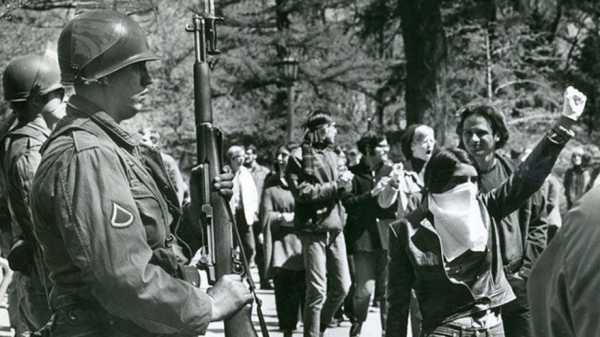 Four years ago, the filmmaker and television producer Glenn Silber and his wife, Claudia Vianello—also a film producer—moved to Santa Fe, New Mexico. For the previous thirty-five years, Silber and Vianello had been living in, first, Los Angeles, and then in the vicinity of New York. During that time, Silber had produced stories for CBS and ABC news, a number of documentaries for PBS and, earlier, a string of highly regarded independent documentaries, including, with Barry Alexander Brown, “The War at Home,” an Oscar-nominated film, from 1979, about the antiwar movement in Madison, Wisconsin. For Silber, the move to Santa Fe had not been entirely successful. “It’s life in the slow lane,” he told me. “The street which we’re living on doesn’t even have sidewalks or street lights. It’s a dirt road. I’m a newshound. When I hear the bell, I chase a story like a dog chasing a bone. That’s not happening around here.”

But then came the election of Donald Trump and, the following January, the Women’s March. In Santa Fe, the crowd was estimated at more than ten thousand. “The Zeitgeist was powerful,” Silber told me, “and the clouds lifted a little. The women led the charge.” After the march, people in Santa Fe began organizing (“There’s been more organizing than you’d believe,” he told me) and Silber recognized the dynamics from his days in Madison, where he’d been an undergraduate before making his film. He began wondering what he could do to contribute.

Silber went home, rooted around in a box, and found a dusty DVD of “The War at Home.” He went downtown to the Jean Cocteau Cinema, an independent art house that had been purchased not long before by the eccentric science-fiction and fantasy novelist George R. R. Martin, whose books form the basis of the “Game of Thrones” TV series. There, Silber introduced himself to Jacques Paisner, who was then the program director. “My goal,” Silber told me, “was to keep the spirit alive.” He wanted simultaneously to preserve the history of an earlier period of resistance and “reach out to the floating base of progressives.” The film opened at the Cocteau theatre in early May and was a huge success. “It was one of the biggest hits I had in the two years I was with the theatre,” Paisner told me. “People see it differently now than they did when it came out,” Silber said. “They cheered like crazy.”

But there were problems with the DVD format. On opening night, within thirty seconds, Silber, who is not a calm person, detected what he refers to as a “jitter” in the film. It’s not clear whether anyone in the audience noticed (and, if someone did, it didn’t dampen anyone’s enthusiasm), but Silber became so agitated that he briefly walked out. It did not help that, when the show was over, Vianello independently asked him what the shaking in the film had been. “It was a computer malfunction,” Paisner explained, “not a permanent problem, but it was during the completely sold-out first show and it was really mortifying to Glenn.” But it’s also true, as Paisner explained, that DVDs in theatres can crash and not play correctly and neither the visuals nor the audio are as clear.

Nowadays, films are distributed in what is referred to as D.C.P., for “digital cinema package,” and, beginning around 2013, most commercial cinemas ceased using any other technology. Silber immediately began thinking of restoring “The War at Home.” But converting a film to D.C.P. is neither easy nor cheap. Fortunately, Silber knew where to turn. Shortly after “The War at Home” was released, he joined with Sandra Schulberg and several other filmmakers to create First Run Features, an organization that worked to get independent films of that era, including “The War at Home,” “Northern Lights” (on which Schulberg was an associate producer), “The Wobblies,” and others, into theatres. Schulberg, who is the granddaughter of B. P. Schulberg, one of the original Hollywood moguls, and the niece of the late novelist and screenwriter Budd Schulberg, now lives in New York and runs an organization called IndieCollect, which restores independent films that are in danger of disappearing. Silber refers to her as “the godmother of American independent film” and, as Jake Perlin, the artistic director of the Metrograph theatre, in lower Manhattan, put it, “If Schulberg says, ‘We’re restoring a film,’ that’s a major thing.”

Schulberg told me that independent films like “War at Home” are disappearing. “I’m ringing alarm bells about the thousands of indie films that will go extinct in the next decade,” she said. “Filmmakers have lost track of original masters, labs have closed, analog videos have become technologically obsolete. Even if Glenn and I didn’t have a connection, it’s one of the movies I’d want to work on to get it front of audiences.”

IndieCollect finished its restoration this fall, and “The War at Home” was promptly picked up for the New York Film Festival, where it opens this week and where the festival director, Kent Jones, refers to it as “one of the great works of American documentary moviemaking.” It opens at the Metrograph on Friday.

The film covers the period from 1963—when the earliest demonstrators wore jackets and ties, in some cases smoked pipes, and attended teach-ins—to 1973. Along the way, there is extensive footage from dramatic Madison developments, including a police attack on antiwar demonstrators who had seized a campus building to protest the visit of Dow Chemical recruiters to campus. (Dow was the maker of napalm.) In that episode, the police clubbed—pretty much unprovoked—anyone they could get their hands on. In an unintentionally humorous moment, captured on film, a sociology professor named Maurice Zeitlin remembers students rushing in and asking him to talk sense to the police. Zeitlin runs out of his office, only to be clubbed from behind. Barry Alexander Brown, who has continued to make films and has worked with Spike Lee for many years, told me, “The police did everything wrong during the Dow Chemical riots. They thought they were controlling the situation, but, in fact, they were doing the exact opposite. They wound up politicizing a lot of people.”

A key point in the development of the Madison movement was the Sterling Hall bombing, in 1970, which targeted the Army Mathematics Research Center. One of the perpetrators of the bombing, Karl Armstrong, describes travelling from Madison to Chicago to join the protests outside the 1968 Democratic National Convention. There he was caught up in what was essentially another police riot and recalls thinking, while having his face ground into the asphalt, “If they’re going to make war on us, we’re going to make war on them.” Armstrong and others returned to Madison, where they determined that the research center was working to increase the accuracy of the bombing campaign in Vietnam. They planted their own bomb, timed to go off at 3:42 A.M., when they thought the research center would be empty. Although the bombers alerted the Madison police shortly before the explosion, word never reached a postdoctoral student, Robert Fassnacht, who was in the basement, working late, in order to be free to go with his family on vacation the next day. Fassnacht was killed in the blast.

One of the disturbing things about “The War at Home” is the sense you feel of two sides coming closer and closer to a shooting war. In May of 1970, members of the Ohio National Guard fatally shot four unarmed students and wounded nine others at Kent State University. Ten days later, police in Jackson, Mississippi, shot and killed two more students. There is a chilling moment in Silber and Brown’s film in which one of their interviewees, Ken Mate, who is identified as an “underground newspaper editor,” describes a moment when he and a friend watched as a cop pulled out a revolver and drew a bead on protesters. Mate recalls that he and his friend also had firearms. Unseen by the cop, they picked up their guns, aimed them at the cop, and only put them down when the cop put his own gun away. As a viewer, you sense that disaster was averted only by the narrowest margin.

“What you learn from the film is the importance of the movement staying nonviolent—you can see the ways in which the authorities used what movement violence there was against it,” Silber told me. “But you also see how the movement grew from just a few hundred people to a mass movement that took down two very powerful Presidents. That’s the lesson for today, that if a President is behaving autocratically, we’ve created a political culture that allows us to take him down.”

NPR Seeks Out Interview with Sputnik Reporter, But Refuses to Go...

Rex Tillerson had to warn Trump not to break the law...