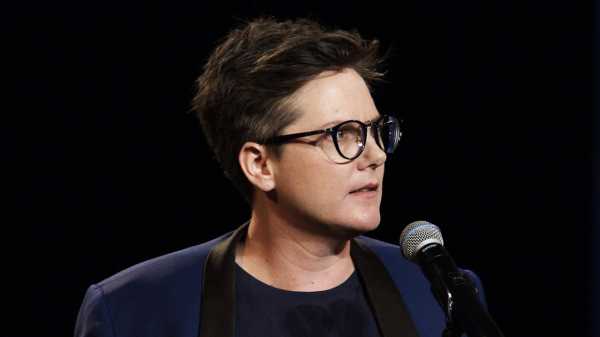 “What sort of comedian can’t even make the lesbians laugh?” the Australian comedian Hannah Gadsby asks in her new Netflix standup special, “Nanette.” “Every comedian ever,” she answers, grinning conspiratorially, her eyebrows darting behind horn-rim glasses. “The only people who don’t think it’s funny are us lezzes, but we’ve gotta laugh, because if we don’t—proves the point!” It’s a good joke, knowing and playful in the style that Gadsby, a star in her home country, has built her comedy career on. But it also contains a seed of discomfort: the image of the hypothetical gay woman in the audience, not quite comfortable with the joke, but being conscripted into laughing anyway, at her own expense.

This gesture is intentional. “Nanette,” Gadsby’s first foray into the American mainstream, begins as a traditional comedy show in the autobiographical, self-deprecating vein of the comedian’s older work. Gadsby is a native of Tasmania, Australia’s rural southern island state, where, when she was growing up, the majority of Tasmanians believed that homosexuality should be a criminal offense. She jokes about coming out to her mom and being mistaken for a man in public because of her butch appearance. One time, a cashier was mortified after calling her “sir.” Another time, a drunk guy at a bar threatened to beat her up when he saw her hitting on his girlfriend, only to apologize when he realized that she was a woman.

But in the course of the hour-long set, which was filmed at the Sydney Opera House (Gadsby has also been performing at the SoHo Playhouse, in New York), “Nanette” transforms into a commentary on comedy itself—on what it conceals, and on how it can force the marginalized to partake in their own humiliation. Gadsby, who once considered Bill Cosby her favorite comedian, now plans to quit comedy altogether, she says, because she can’t bring herself to participate in that humiliation anymore. Onstage, Gadsby typically speaks in a shy, almost surprised tone, playing jokes off of an unassuming, nebbishy demeanor. She clutches the mic with two fists and speaks softly, forcing audiences to listen closely to hear her. In "Nanette," she seems to slowly shed that persona, becoming increasingly assertive and, at times, deadly serious. Her set builds to include more and more disturbing accounts of her own experiences with homophobia and sexual assault, and broader themes of violence against women and male impunity. But for every moment of tension, Gadsby gives her crowd release in a punch line—until she doesn’t. When the jokes stop, the audience is forced to linger in its unease. “This tension? It’s yours,” she says at one particularly upsetting moment, toward the end of the show. “I am not helping you anymore.”

Gadsby’s moving anti-comedy in “Nanette” has been compared to Tig Notaro’s set, in 2012, about having breast cancer and her grief at the recent death of her mother, and how the two catastrophes had compounded each other in her life. Both shows challenge audiences to think about the comedian not just as a performer but as a person capable of pain. But where Notaro’s set felt intimate and immediate—it was delivered just days after her diagnosis—Gadsby’s material is almost two years in the making and seems to harness the broader fury of the #MeToo moment. Gadsby, like many women, is done hiding her anger, and in “Nanette” she bends the bounds of standup to accommodate it.

Gadsby holds an art-history degree, and at one point in her show she shifts to discussing the lives of famous artists. “I hate Picasso,” she says, “but you’re not allowed to.” In his forties, the painter—married, famous, and at the height of his artistic career—carried on an affair with a teen-age girl named Marie-Thérèse Walter. “Does it matter?” Gadsby asks. “Yeah, it does matter.” Picasso later said of his affair with Walter, “It was perfect. I was in my prime, she was in her prime.” Gadsby goes on to explain the obvious, that no girl is in her prime in her teen years—how could she be?—but Picasso’s meaning is clear: that a woman’s prime was nothing more than the prime of her attractiveness to him. She points out that Picasso was the founder of Cubism, the artistic form that broke free of three-point perspective and allowed multiple perspectives to be simultaneously represented on a canvas. “Any of those perspectives a woman’s?” Gadsby asks. Art, Gadsby makes clear—from painting to comedy—does not liberate everyone equally. It can replicate the same privileges and exclusions as the culture in which it was made.

In the world of standup, this is, in part, a problem of form. In the show, Gadsby explains that a joke, at its core, has two components, a set-up and a punch line. Stories, meanwhile, have three parts: a beginning, a middle, and an end. Gadsby thinks that there is harm in the joke’s tendency to truncate a story; the ending is the place where understandings can be expanded and lessons learned. “That’s where catharsis lives,” she said, in an interview with Emily Nussbaum on The New Yorker Radio Hour. “That’s where hindsight lives.” Telling a joke, by contrast, means leaving things out—cutting down on complexity, context, and moral stakes. For Gadsby, excising these for the sake of making people laugh has become too great a sacrifice.

One of comedy’s most effective tools is something known as a callback, wherein a story or a bit from earlier in a set is mentioned again later, and the repetition amplifies the joke’s effect. A callback helps to establish a rapport between the comedian and the audience; now they’re in on the joke together. In “Nanette,” Gadsby subverts this technique to devastating effect, returning to the story of the man who threatened her for flirting with his girlfriend outside a pub, only to back off when he realizes that she was a woman. When the story ends there, it’s funny—it’s a joke about the man’s ignorance. But the second time Gadsby recounts this, she tells us that the man in fact came back to her after he walked away, realizing his mistake. “I get it. You’re a lady faggot,” he told her. “I’m allowed to beat the shit out of you.” And he did. No one stopped the man from beating her, she says. She never reported the attack to the police, and, even though she was injured, she never took herself to the hospital. Recounting this, Gadsby’s eyes redden; her voice is loud and breaking. She points one hand emphatically outward, as if implicating the whole world in failing to protect her.

Watching Gadsby, it was impossible not to think of the many women who’ve come forward in recent months with stories of abuse that were years or even decades old. You could consider the #MeToo moment itself as a kind of callback, a collective return to stories that women have been telling one way—to others, to themselves—with a new, emboldened understanding that those past tellings had been inadequate. Like Gadsby, many women have excluded or elided the difficult parts of their stories for the sake of a punch line, the sake of not upsetting the status quo, or the sake of the comfort of their listeners. For many others, the #MeToo moment was not the first time they had spoken out; it was only the first time that they were listened to. Perhaps this is the most vital way in which “Nanette” reflects the events of the past year. In her interview with Nussbaum, Gadsby recounts that when she first began performing the show, she would be heckled by members of the audience—always by men, always at the point when she revealed that she had been sexually assaulted. It is hard to imagine that happening now. In her Netflix special, the crowd is rapt. People are paying attention.