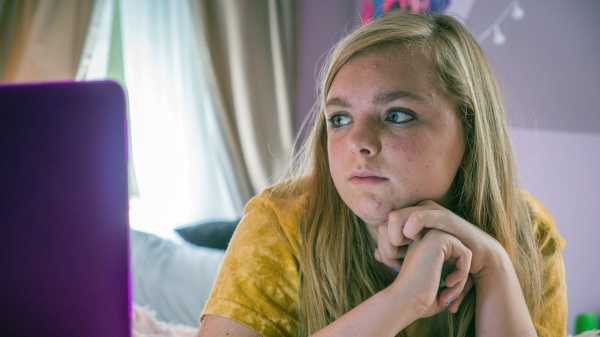 Recently, the actress Molly Ringwald tweeted that “Eighth Grade” is “the best movie about adolescence I’ve seen in a long time. Maybe ever”—words that carry some weight, coming from a performer who made her name in John Hughes’s iconic teen dramedies of the nineteen-eighties. (The director Bo Burnham’s very eighth-grade-like response: “i dead now ok what thank u byeeeee.”) Watching the movie, I was reminded, keenly, of how every single interaction in your early teens is potentially weighted with the kind of teeth-gnashing mortification fated to be recalled decades later. I can still vividly recollect how, when I was fourteen, I had begun making out with a boy when he stopped midway and, pulling back, asked if I had farted, a question to which I responded in the negative. (Reader, I had farted.)

In addition to its queasy verisimilitude, “Eighth Grade” offers acute observations on how social media and the language of self-care have warped teen life. Kayla (played by the actress Elsie Fisher with an almost frightening realism) is a girl struggling to navigate her middle school’s casual social Darwinism during the last week of the last year before high school. She is not so much humiliated or bullied as simply overlooked—a complicated kind of suffering. She is shy and awkward, and her attempts to connect with her more socially adept peers are continually rebuffed. Early on, Kayla watches as her classmates receive their “superlative” awards. (She wins “Most Quiet.”) Two of the eighth grade’s most popular teens—the lithe, flinty Kennedy and the nonchalant dreamboat Aidan—are elected “Best Eyes.” As they pass by her desk, Kayla mumbles “Good job”—a compliment that both Kennedy and Aidan, naturally, snub.

The importance of trying to do a “good job” is central to Kayla’s attitude. She’s a believer in the power of positive thinking—of decent intentions and sincere effort remunerated. In the popular vernacular of New Age manuals such as “The Secret,” if you want something desperately enough, you can will it to happen; if you convince yourself you are able to do a good job, you will do a good job. Kayla espouses this perspective in a YouTube vlog that serves as the movie’s opening scene. The vlog—clips of which punctuate the movie—is supposedly targeted at an audience of fellow teen advice-seekers, but is really an instrument of auto-suggestion for Kayla. (No one is watching.) “Being yourself is really hard, and the hard part about being yourself is that it’s not always easy,” Kayla offers, earnestly. The kids at school, she says, think she’s quiet, but, in fact, that’s not her real self. If they really knew her, they’d know she was “funny and cool and talkative.” How exactly they would discover this—how the leap from wanting to having is actually made—remains an open question. “Basically, you know, like, be yourself, and don’t care about what other people think about you . . . and everything will work out if you’re just being yourself,” Kayla sums up.

In a recent interview with Rookie, Elsie Fisher noted that, before getting the role of Kayla, she had stopped acting for a while, because she was “a teen-ager with a lot of acne and roles for teen-agers are disingenuous a lot of the time, and if they want to hire an actor to play a teen-ager, they’re not gonna hire a teen-ager with a lot of acne.” “Eighth Grade” revels in the rough, pimply particularities of middle school: the too-large backpacks on still-developing, still-childlike bodies; the unpracticed rituals of grooming; the bulges of baby fat rising above a tight waistband; the panic of early sexual interactions; the painful but necessary separation from your suddenly extremely embarrassing parents.

But the movie also portrays, more broadly, the essential contradiction within the language of individual self-affirmation that surrounds us at fourteen or at forty. In order for “everything to work out,” one needs not just to be oneself, but to be one’s best self. This requires constant work and upkeep, which must be privately pursued and publicly disavowed. Kayla’s mirror and dresser area are littered with sticky notes bearing the rah-rah messages of the intertwined contemporary trifecta of self-care, self-improvement, and self-help, veering from the practical to the spiritual and back: “Get new green shades of eyeliner,” “Put a little lip gloss on the cheeks for shine,“ “Learn a new joke every day,” “Go get ’em!” “Now!” “Go!” “Dream big!” and, with a smiley emoji, “Be sexy.” Under these exhortations, Kayla goes through her morning routine: following a YouTube “everyday makeup tutorial,” she spackles her skin with concealer, lines her eyes, and blow-dries her hair. Only then does she settle back in bed to take a morning selfie on Snapchat. “Just woke up like this . . . Ugh,” she writes in the caption.

What continues to make a movie like “The Breakfast Club” such an affecting distillation of the adolescent experience (despite its sometimes-retrograde representations of gender and race) is its understanding that to depict its subject matter correctly, it is imperative to zero in on the world of intra-teen social relationships in closely observed, un-prettified detail—to the exclusion of much else. If Hughes’s movie was able to reach this goal by locking its five protagonists in the school library for the course of a daylong detention, then “Eighth Grade” works similarly, not just by restricting the arc of its plot to a tightly packed five days but by intensely refracting Kayla’s experience through the closed circuit of social media, which serves as a perfect simulation of the cruel dynamics of teen sociability.

Note how the bitchy Kennedy reluctantly messages Kayla on Instagram: “hi so my mom told me to invite you to my thing tomorrow so this is me doing that.” Kayla scrolls through her feed obsessively, day and night, her face illuminated in her dark room by her screen’s glow as she observes her peers being gloriously normal—funny and cool and talkative. (On her list of goals, she writes: “Make small talk, be nice, leave nice comments on people’s IGs.”) Even scenes of real-life interactions between kids are accompanied by the pulse and wink of the phone screen. “Whatchya doing?” Kayla asks Aidan, whom she has a crush on, as she crawls to him in the darkened classroom during a school-shooting drill. “Playing a game,” Aidan answers, his gaze turned away from her, scrolling, scrolling.

In his review, my colleague Richard Brody suggested that, unlike Greta Gerwig’s recent “Lady Bird,” whose teen protagonist has a “vigorous and complicated cultural life,” Kayla in “Eighth Grade” is something of a thin character, as the movie fails to give her substance or curiosity or interests. This is true enough. Kayla is ordinary, basic—not especially aspirational or cultured. She listens to Top Forty-style music, wears mall garb, is not much of a reader or an artist. Like the rest of the kids in her class, she doesn’t seem to care about the political implications of the drill they are all made to sit through. But her lack of defining characteristics that might suggest a future artistic trajectory, is, I think, part of the movie’s point. For all her relative blankness, Kayla is emotionally sensitive, and the intricacies and pressures of the social world to which she silently bears witness affect her deeply. These are her interests and her passions, as limited and reduced as they are, and this rings true. Similarly, the parts of Gerwig’s movie that seemed really alive to me had to do not with its protagonist’s theatrical ambitions, or her cosmopolitan fantasies, or even her relationship with her mother, but with her interactions, simultaneously thrilling and mundane, with her peers—ingratiating herself with the rich, hot dummy of a queen bee, having first-time sex with a listless poser, breaking up with a closeted boyfriend, ignoring and then once again befriending her chubby childhood B.F.F. “Eighth Grade” succeeds exactly because it gives center stage to a careful, particularized depiction of these types of interactions.

The world of the Internet and of social media, with its easy boasts and false surfaces and quantifiable markers of popularity (“I haven’t been getting that many views on my videos, so, if you could share and stuff, I’d really really appreciate it,” Kayla asks on her vlog), foreshortens one’s patience with the more organic processes of learning and growing and changing. And these real-life processes, the movie implies, are plenty difficult, even without the added pressure of Instagram or Snapchat. In a centerpiece scene, Kayla decides to follow her own vlog’s advice and “put herself out there,” attending a birthday pool party at Kennedy’s house. Shot from behind, her back vulnerable in a green one-piece swimsuit, she encounters a site of mundane teen horror, a kind of suburban, more sanitized “Spring Breakers,” in which a gaggle of proto-hunky boys and bikini-clad, self-assured girls cavort in the water. They, of course, ignore her, and later Kayla recedes to a safe distance to scroll on her phone—an activity that tends to stir exactly the same kinds of closed-loop feelings of loneliness and dejection she experiences while offline.

Things seem to improve when Kayla shadows Olivia, an enthusiastic older teen (the great Emily Robinson), on a daylong visit to the local high school. After, Olivia kindly invites Kayla to hang out with her and her friends at the mall, which hints at a new, thrilling horizon of social possibility. (The sequence in which Kayla speaks to Olivia on the phone to confirm the invite, while pacing her room excitedly, is, in its spot-on depiction of teen nerves, a minor masterpiece.) But an uncomfortable encounter in the back seat of the car with one of Olivia’s male pals suggests that high school might be a lot of things, but it won’t be the utopia Kayla hopes for.

At the end of the movie, Kayla records a vlog that she plans to place in a time capsule, to be opened at the end of senior year. “Congrats on finishing high school, I’m so proud of you,” she says. “If high school sucked for you, I’m really sorry about that, and that sucks. But it’s, like, whatever: middle school wasn’t so great for me, but I’m past it now, and I’m moving forward. Just because things are happening to you right now doesn’t mean that they’re always gonna happen to you. And things will change. And you never know what’s gonna, like, happen next, and that’s what makes things exciting, and scary. And fun.” Oddly, watching “Eighth Grade,” with its deeply recognizable minor tragedies, and even more minor triumphs, also made me feel a strange kind of hope. Burnham’s ability to view and capture horrible teen dynamics so clearly and convincingly indicated to me that one could live to tell the tale. After all, hadn’t I survived? I had, hadn’t I?

Password sharing could be a good thing for Netflix and Hulu

Kirsten Gillibrand breaks down why we need more women in politics,...