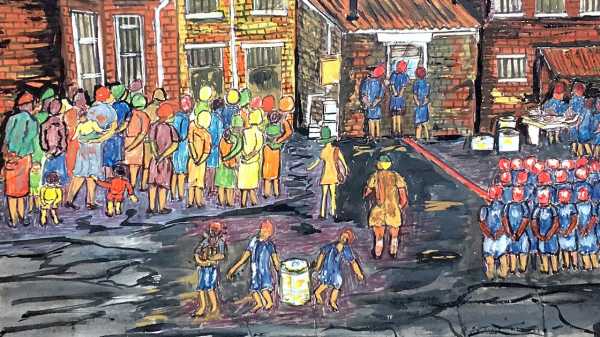 The South African writer, academic, and activist Fatima Meer was a busy woman. While still in high school, in the nineteen-forties, she established the Student Passive Resistance Committee, in response to apartheid laws restricting Indian land rights, and gave speeches at anti-apartheid rallies. She went on to be involved in the founding of several more activist organizations: the Durban and District Women’s League, the Federation of South African Women, the Institute for Black Research, and the Black Women’s Federation. She was the first nonwhite person to teach at a white South African university, and she wrote or edited more than forty books, including the first biography of Nelson Mandela, “Higher Than Hope,” and “Apprenticeship of a Mahatma,” on Gandhi’s coming of age in South Africa. While also raising a family and surviving attacks from the state and political opponents (including an assassination attempt), Meer made time to indulge her artistic side. “My mother was drawing all the time,” her eldest child, Shamim Meer, told me, “from decorating the walls of our nursery to taking us down by the river to draw the landscape.” (Meer died in 2010, at the age of eighty-one.)

“The Pencil Is a Key: Drawings by Incarcerated Artists,” a new show at the Drawing Center (through January 5th), includes Meer’s drawings from her time at the Johannesburg’s Women’s Jail, at Constitution Hill, where, in 1976, she was held for six months, without trial, under the apartheid government’s Terrorism Act. Her crime was an attempt to organize a mass rally with the activist Steve Biko, after police shot at and killed student protesters in the township of Soweto. She was detained with other female activists, including Winnie Mandela, who, with the help of her lawyer, ultimately smuggled Meer’s drawings out of the prison; the works remain the only visual record of life in the jail from that period. The originals are part of a permanent exhibition at the jail, which is now a museum, and are digitally reproduced at the Drawing Center, with captions written by Meer. 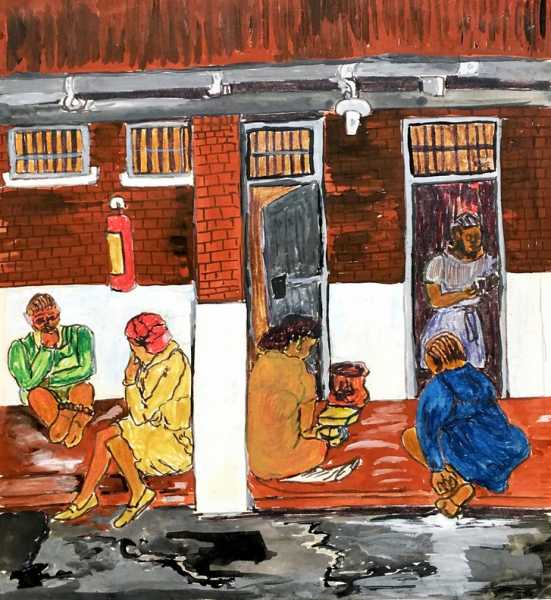 “Our struggle has been to muster together that self-confidence which encourages us or sets us free from the fears of our own personalities,” Meer once said. “To be disenfranchised implies that there is a deliberate and planned design by the State to quell your voice and to make you in a sense a dumb animal.” The redress in her art is in highlighting the incarcerated women’s moments of solidarity, as a community, and their individual enjoyment of ordinary moments. Guided by the captions, we learn of daily routines: empty bucket, brush teeth, exercise, have breakfast, scrub cells, do laundry, and bathe; lunch at eleven-thirty; lockup between twelve and one-thirty or two; on the veranda until supper (at four); lockup at four-thirty. On the veranda—in front of the blue metal doors of their cells, and in between pillars half painted white, half exposed brick—we see Jeannie Noel playing cards with Sibongile Kubheka; Sally Motlana musing behind her newspaper; Cecily Palmer, pensive; Joyce Seroke and Vesta Smith playing Spill & Spell. Beauty, who was convicted and sentenced to hard labor for incitement during Henry Kissinger’s visit to South Africa, cleans the walls.

Drawing is a common medium for incarcerated artists because of the relative ease of access to materials. The Drawing Center show—which covers a range of eras, from Revolutionary France to modern-day Turkey, and encompasses works created during the Holocaust, under South American dictatorships, and by inmates at Guantánamo—reflects pain but not hopelessness. These artists drew on old maps, calendars, scraps of clothes, and various found papers, using laundry pencils, ballpoint-pen refills, food, and bodily fluids. Prison artists, the catalogue notes, often draw what they see, and “in prison the view is radically limited.” This means that there are more portraits of people in the show than there are landscapes. But the limitations that incarceration places on what a person can physically see engenders works of powerful imaginative vision.

A particularly striking example is a series of postcards from a Soviet gulag, which the meteorologist and natural scientist Alexey Wangenheim sent to his daughter in the nineteen-thirties. His drawings of the plants and animals around him, and the aurora borealis above, trace out a larger world that he and his daughter both occupy, in which they are not separated by time and space. Works by the artist Ruth Asawa, created when she was a teen-ager, in a Japanese-internment camp, share the documentary feel of Meer’s drawings, showing what life was like for those interred by the U.S. Asawa, who was held captive along with her mother and five siblings, first in California and later in Arkansas, learned her craft from detainees who had worked as artists for Disney. Her works featured in the show include a drawing of a sumo-wrestling match taking place underneath a makeshift canopy; red-and-white pillars resemble candy canes, and onlookers blend into one another in a cartoonish style of vivid colors and bold outlines. Asawa’s playful depiction of communal gathering and entertainment seems to deride the isolation of detention. 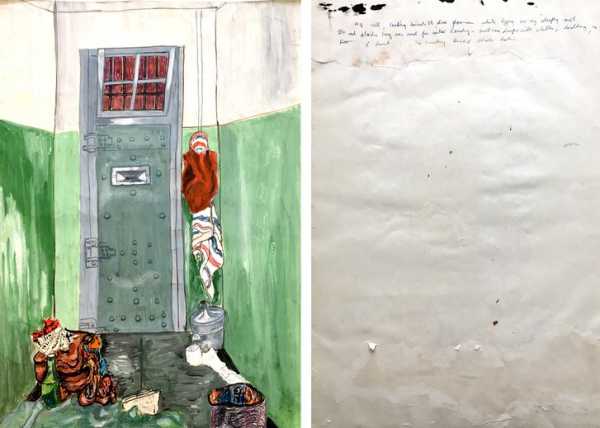 Meer’s drawings foreshadow the investigations and studies she would later commission on the marginalized in society, as the director of the Institute for Black Research. Some of them, such as “Power of the Powerless: A study of South Africa’s disenfranchised,” “Black-Woman-Worker” (which included chapters on “Our Education,” “Our Children,” and “Our Factory”), and “Factory and Family: The Divided Lives of South Africa’s Women Workers,” give a sense of the daily lives of black working women, at their jobs and at home, in English and in Zulu, and highlight efforts to build community and mutual support in the face of repression and segregation. In her political life, as well, Meer continued to insist on a multiplicity of perspectives. “She had to fight her comrades on the issues past 1994,” Shamim Meer told me. “We got independence, but we still haven’t got freedom.”

As a political prisoner, Meer was officially in a different category from most of the people with whom she was incarcerated, yet she often uses “we” in her captions. As a Muslim Indian woman living in apartheid-era South Africa, she saw labels and separations as bridges to connect rather than as walls to separate. Meer was the first woman whom the apartheid government “banned,” and she was banned multiple times, meaning that, for twelve years of her life, she was limited in where she could go and what she could publish, and forbidden from joining any gatherings. Still, she would swap her sari for a disguise, dressing as a poor white woman, in a big hat and pants, to bypass authorities and organize classes for poor, marginalized students. Meer also defies the state of being “banned” in her drawing “The Card-Players,” in which a number of detained women, along with a female warden in an orange jailer’s outfit and a green beret, sit in a circle, playing cards. The caption on another of her drawings, of the Wardress Cecelia playing a game of Spill & Spell with Edith Mbandla, a prisoner awaiting trial, takes delight in a simple fact: “Both are breaking rules.”

What is Known About the A320 Plane Crash in Pakistan So...