Home Culture The Depressingly Realistic Workplaces of “Sell It Like Serhant” | 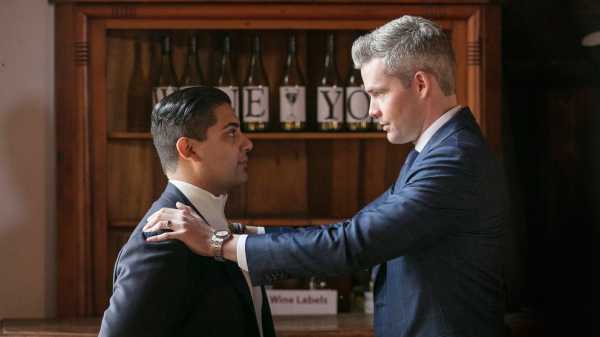 Tim, a young U.S. Army veteran, works at a New Jersey winery. It is not going well. While his co-worker, Scott, genially pushes bottle after bottle to customers who have just toured the vineyard, Tim, whose guarded manner seems to conceal some as yet unarticulated emotional wound, knows that, unless his numbers improve, he will find himself out of a job. In a past moment in American history, Tim might have turned to Dale Carnegie’s “How to Win Friends and Influence People.” Instead, he calls in Ryan Serhant, a thirty-three-year-old silver fox who cut his teeth peddling real estate to the one per cent on the Bravo show “Million Dollar Listing New York.” Tim wants to be taught how to “Sell It Like Serhant,” and it is Serhant’s voice that we hear over the opening credits of his new Bravo spinoff, equal parts cajoling and hectoring, as he addresses his salesperson mentees: “Make a connection . . . Be passionate . . . Remember, smile!”

Shows like “The Apprentice” and “Shark Tank,” and even cooking- or design-focussed programs, such as “Top Chef” or “Project Runway,” have all used a similar formula to that of “Sell It Like Serhant”—combining the wisdom of a guru, the suspense of a ticking clock, and the enjoyment of watching contestants master tricks and techniques (supreming a citrus fruit, creating a dress out of recyclable materials). The pleasures of these series lie in the specificity of the tasks and the passion of the contestants, which both spring from and compensate for the shows’ formulae. In “Sell It like Serhant,” though, formula overshadows particularity. Despite the unique setting of each episode—Tim works at the winery; Mariel sells monthly subscriptions at a waxing salon; Amanda sells hot tubs; Erick rents out apartment shares to recent college graduates—we learn nothing about wines or hot tubs or waxing or the New York rental market from watching the show, probably because the subjects’ positions are not vocations but jobs in which they have simply found themselves. In this reality-TV series as gladiatorial match, not being eaten alive means simply getting to keep your job, no matter what that job is. Paradoxically, this is what makes the show worth watching. Within the parameters of the reality genre, “Sell It Like Serhant” is an unusually coherent though likely inadvertent representation of the diminishing returns of so many contemporary work environments, which leave employees furiously treading water just to stay afloat. At certain moments, as the camera lingered on the bland, prefab interiors of an office, or as empty-eyed salesmen milled about a hauntingly drab sales floor, I felt as if I were watching a Dardenne brothers movie, the kind you might come out of convinced of the need for a socialist revolution.

In this chillingly real context, the artificiality of the show’s machinations stands out all the more starkly. Did the network run an advertisement to find people who were bad at their jobs, I wondered? When in the process did Tim’s boss come in on the ruse? Perhaps most blatantly false is the sped-up emotional unveilling that the show relies on to prop up its subjects’ transformations. In “Sell It Like Serhant,” the expulsion of psychological pain, rather than technique or tricks or flair, is the prerequisite for killing it in sales, and the process happens with unnerving swiftness. In a one-on-one conversation with Serhant, Erick, the twenty-one-year-old rental broker, explains that he was raised by a single mother, and that his grandmother, whom he helps care for, suffers from Alzheimer’s. Serhant suggests that he is taking on too much familial responsibility and convinces him that he needs to move out of his mother’s home. A moment later, Erick is hobnobbing with apartment-seeking N.Y.U. grads at a work event, nabbing new takers for his East Village rental listings.

The solving of a psychological issue is a mainstay of reality television—seen in “The Bachelor,” where contestants who meet the right match speedily recover from, say, the death of a loved one, and in shows such as the recent “Famously Single,” where unlucky-in-love D-list celebrities are analyzed by “Dr. Darcy,” a glossy-haired therapist, who makes them participate in exercises (for instance, picking up strangers to date on the Third Street Promenade, in Santa Monica) to help them get over their past relationship traumas. In the early days of reality television, such psychological reckoning seemed to take place more slowly and organically—as in the third, memorable season of “The Real World,” shot in 1994, in San Francisco. The inclusion of Pedro Zamora, who was H.I.V.-positive, was a teachable moment for viewers and housemates, who had to learn to negotiate their attitudes to homosexuality and AIDS, but the relationships that Zamora forged still felt true and touching. More recently, on this year’s Netflix reboot of “Queer Eye,” we glimpsed, and often wept over, what appeared to be the emotional truths exposed as the Fab Five took on their subjects’ hair, wardrobe, clothes, diet, and exercise regime. It was the particularity of the moments presented that aroused our sense of recognition and sympathy: Tom’s ex-wife telling him that she liked his new glasses; the expression of loving bewilderment on the face of AJ’s stepmother when he came out as gay.

The five experts of “Queer Eye” warmly attend to their subjects, with the quasi-hippie goal of trying to open them up to life’s ordinary surprises over the course of a week. Serhant, conversely, is interested in subjecting his clients to short, sharp interventions, with the more modest, and perhaps more realistic, aim of insuring that they are not so debilitatingly depressed that they lose their jobs. He finds that Tim is bad at selling wine because he can’t “relate to people”—a problem that began with Tim’s hard-drug addiction, in his teen-age years, and the shame he feels for the pain that this caused his parents. Soon after, Tim’s parents surprise their son with a visit, organized by Serhant, while Tim is leading a tasting; the next day, Tim manages to push an unprecedented number of wine cases. Meanwhile, Erick, the rental agent, is encouraged by Serhant to “act his age,” in order to “loosen up” in his sales technique: in a bare rental property, the mentor instructs the mentee to meow like a cat; squat, flap his arms, and quack like a duck; bark like a dog; and, finally, roar like a lion. After this exercise, Serhant plays the role of a kooky client seeking creative housing solutions for his pet ferrets. Erick is game enough in following these directives, which Serhant admits are “a little silly” but are part of a larger attempt to teach the agent to “have fun every day.” As I watched Erick’s stiff body language and uncertain gaze, I thought that he must feel like his job might not be worth the price of this barrage; that he, like us, must know that he had been sold something that he didn’t need.

US Conducts Exercise to Prepare for Nuclear Exchange With Russia –...

US Economy to Recover Quicker Than Most Despite Shrinking GDP &...