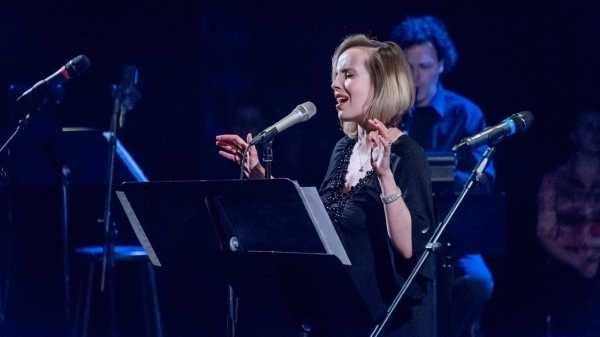 In the midst of the Second World War, a team of ethnomusicologists from the Kiev Cabinet for Jewish Culture, led by the folklorist Moisei Beregovsky, collected hundreds of newly composed Yiddish songs addressing the deep insanity and terror of life during the Holocaust. Beregovsky was planning to curate a five-volume compilation—something spiritually akin, in a way, to what Harry Smith would do, in 1952, with his “Anthology of American Folk Music.” The idea was that, by documenting vernacular folk music, a richer, more human history could perhaps be written—dread and anguish, after all, are sometimes best sublimated into song, a form that allows for the expression of feelings that might elude language.

But Beregovsky was arrested in 1950, accused of promoting Jewish nationalism and anti-Soviet activities. His transcriptions were boxed up and sealed. For decades, historians presumed that his work had been destroyed. Beregovsky was eventually declared “rehabilitated,” and returned to Kiev, in 1956, but he and his colleagues died believing that the songs they’d gathered were gone.

In the nineteen-nineties, librarians at the Vernadsky National Library of Ukraine came across a stack of unlabelled containers and catalogued their contents. A decade later, Anna Shternshis, a professor of Yiddish studies at the University of Toronto, discovered and became preoccupied by what they held: Beregovsky’s archive, which she later described as “quickly deteriorating, fragile documents, some typed, but most hand-written on paper.” The songs—defiant, raw, and often graphic—had not been performed since 1947.

Working closely with the writer and performer Psoy Korolenko, Shternshis spent three years collaborating with various musicians and composers to produce “Yiddish Glory: The Lost Songs of World War II,” an anthology that was released by the San Francisco-based Six Degrees Records earlier this year. “It makes me happy to think about this scholar—who I, of course, never met—a colleague from the past whose work enabled us to hear the voices of people who lived through the darkest chapter in modern Jewish history,” Shternshis told me recently.

It’s perhaps easier to rally for the perpetuation of a cultural practice tottering on the edge of extinction than it is to recognize the very beginnings of an erasure—to protect something while it’s still happening. Beregovsky seemed to know that if he didn’t collect and catalogue these songs when he did they would have been expunged from the historical record. He sought out the most urgent and unmediated testimonies he could find, songs that recounted the atrocities of the era as they were being committed. That these pieces are all by nonprofessional musicians merely gives them an added air of immediacy. To articulate your own terror is an act of self-preservation: it helps to loosen or briefly alleviate certain anxieties, and it creates a document of the experience, something that might be remembered after you’re gone.

The compositions left languishing in Beregovsky’s archive were “sometimes written by children, often written by women, always created by amateur authors,” Shternshis told me. There are songs composed by soldiers shivering in trenches (around four hundred and forty thousand Soviet Jews were enlisted in the Red Army; a hundred and forty thousand were killed), or by their terrified and heartbroken families. There are some written by Soviet Jews living in Nazi-occupied parts of Ukraine, where some nine hundred thousand Jews were exterminated. Writing this music “helped people to make sense of the war, motivated them to fight, to ridicule the enemy, to mourn the dead, and more,” Shternshis said. “And none of that survived in historical memory. That alone changed the perceived wisdom and historical consensus of how Soviet Jews experienced the war.”

A few of the songs came with melodies, but most were just yellowing sheets of lyrics, awaiting instrumentation. Recording the pieces for the first time required a bit of ingenuity. The violinist and composer Sergey Erdenko arranged music to accompany the lyrics, and the producer Daniel Rosenberg organized a band of five vocalists and five orchestral musicians to perform the work.

“Musically, this wasn’t what we think of as klezmer,” Rosenberg said—the traditional, celebratory folk music of Ashkenazi Jews. Instead, the songs borrow from a mélange of genres; it was not uncommon, Rosenberg said, for Soviet Jews exiled to Nazi ghettos to change the lyrics of popular Russian songs to reflect their new circumstances “We needed a band that could play both classical and folk music at the highest level,” he said. The group he assembled includes the Russian-born jazz singer Sophie Milman, whose grandmother survived the war via evacuation to Kazakhstan. “Her grandfathers fought in the Red Army,” Rosenberg said. “The songs were incredibly personal to her.” In a short promotional video for the project, Milman says, “Eastern European Jews, we can’t shake the war. No matter how many generations later, we feel it.”

Many of the compositions on “Yiddish Glory” seethe with resentment but emphasize triumph. “Victory Song,” recorded in 1947, encourages listeners to drink heartily and rejoice; soon “those German murderers will be out of our lives forever.” Others mock their invaders, scoffing at their incompetence. “They laughed at Hitler, ridiculed the German Army, satirized failed attempts to invade the Soviet Union,” Shternshis explained. “They made it easier, probably, to fight, because a laughable enemy is not a scary one.”

Some songs are plainly heartbreaking. “A Walk in the Forest” was written by Klara Sheynis, a twenty-five-year-old tailor from Cheboksary, Russia. It’s a farewell lament—a conversation between two young lovers before one departs for war:

See, the sun is already rising,

The world will soon be full of light.

Go, take revenge on the Fascists,

My hero will come back with a badge

I will return with a badge of honor,

Dearest! Enough with the goodbyes,

Go, and have a quick journey home.

“My Mother’s Grave,” from 1945, was written by a ten-year-old child from Bratslav, Ukraine: “Oh, mama, who will tuck me in at night?” the narrator wonders. The piece is performed on the album by Isaac Rosenberg, who is just twelve himself, and who sings in a pure, plaintive voice. He sounds bewildered, as mourning children often do.

“Every time I hear these songs that describe the grief of a ten-year-old walking from his mother’s grave, asking who is going to tuck him in at night, or a soldier who liberated Kiev, only to find his wife and only child murdered—I wonder what those authors would think of their stories being told seventy years later,” Rosenberg said. Rather than feeling unrecognizable to a contemporary audience—totems of a more barbaric and tumultuous time—many of these songs seem horrifyingly germane to a summer in which families are being dismantled and desperate refugees denied asylum. “Their music is becoming more and more relevant,” Rosenberg said. “I hope it serves as a warning.”

Spread of COVID-19 Slowing in Spain as Daily Rise in Cases,...