Home Culture The Direct Gaze of Maria Meza, the Woman in a Viral Photo... 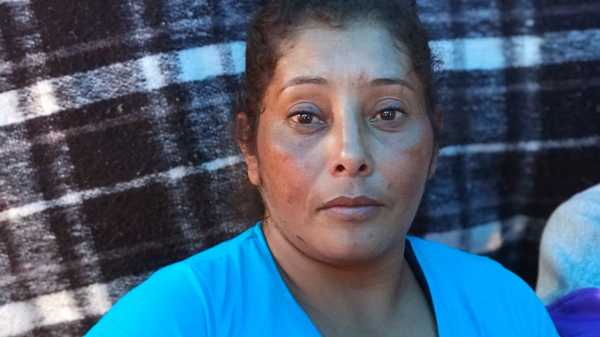 Earlier this week, after the Trump Administration sent tear-gas cannisters flying across the United States-Mexico border, into Tijuana, trailing lines of smoke like tiny jet streams aimed at the so-called caravan of refuge-seeking migrants trekking north from Central America, a photo of the violence, taken by Kim Kyung-Hoon, for Reuters, went viral. Surely you’ve seen it: a woman in black leggings and a candy-colored, Disney T-shirt is flanked by her kids. Her body’s torqued in an instinctive mixture of fear and protectiveness. She’s running from the gas but also groping for the little children, one of whom is barefoot, while the other wears flip-flops and an uncovered diaper. The mother’s face is twisted with the effort; her mouth assumes the sharp curve of an eyebrow expressing perplexity. Behind this pitiful tableau—one that should shame not only President Trump and every person who willingly works for him, but also each of us who lives on the safer side of the border—stand hundreds of people, some distant specks huddled close to a barbed-wire fence, others close enough to disclose their blank stares in the family’s direction.

Perhaps inevitably, the picture, like everything else that touches our poisoned politics, became, as quickly as it went viral, an interpretive battleground, another field on which the worst of us could project hate, fear, and fiction. Someone possessed of too much time for frankly demonic creativity, and too few of the makings of a human heart, scrawled all over the image, pointing out the existence, in the photo, of additional people with cameras, and others, in the wide backdrop, who did not appear, in the stilled moment, to be moving as frantically as the mother with two small children. No matter that Customs and Border Protection has itself confirmed the firing of tear-gas cannisters at the site in question, or that Kim Kyung-Hoon has given interviews describing the story behind the photograph, or that the mother in the image’s foreground—her name is Maria Lila Meza Castro—also spoke to reporters, on video. The usual suspects, including Gateway Pundit and the Daily Wire, have pushed the bogus conspiracy.

In the meantime, the NBC News producer Annie Rose Ramos shared another photograph of Meza, on Twitter. “I just grabbed my kids and ran,” she told Ramos, according to the tweet. In this image, Meza looks at Ramos’s camera with a kind of placid fatigue. There’s a blanket tented behind her, seemingly beating back the sun, and the blue of her shirt reflects upward and makes a wash on her face. In her hand she holds a tear-gas cannister, presumably the one that was lobbed at her children. A little stripe of light glows just under her arm. Like the terrifying photo that put her in the news, Meza’s direct gaze poses a moral challenge: what is happening at the border, and not only there, is an affront, not to some huge, poor, undifferentiated mass, but to the irrefutable personal dignity that gives Ramos’s impromptu portrait a haunted power. Yes, I exist, the photo seems to say. All of this is real.