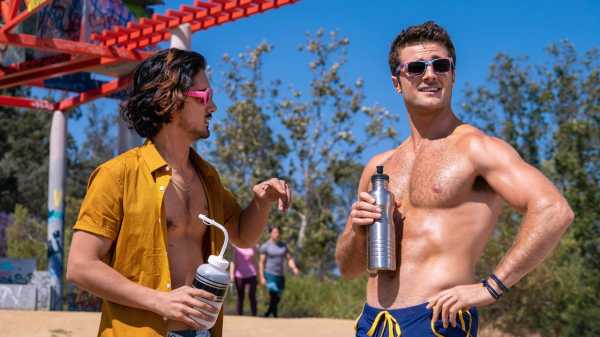 The central characters are twentysomethings, recent college graduates now living in a timelessly glassy L.A. The key connector of the group is Uly (Avan Jogia), which is short for Ulysses. Like Dark Smith (the hero of “Nowhere”), just plain Smith (of “Kaboom”), and Stephen Dedalus (of James Joyce’s Dublin), he wanders through long days to the bottoms of dark nights. Araki’s previous heroes were bisexual or pansexual or, in the case of Dark Smith, “undeclared”; Uly rates himself an “ever-oscillating four” on the Kinsey scale. This handsome everyman went to Hollywood to be an actor, but he lacked a taste for masochism and thirst for fame requisite to keep up the struggle. We meet him as he’s transitioning into doing temp work, which he does while staying constantly stoned.

Ford (Beau Mirchoff), Uly’s roommate, is an optimistic doofus in possession of an allowance that subsidizes his work, composing bad screenplays. Ford is committed to Severine (Roxane Mesquida), an icy Frenchwoman, but she doesn’t believe in commitment. When he puppyishly asks if they’re girlfriend-boyfriend, she says, without affect, “You know I believe that monogamy is an arbitrary cage foisted upon us by the miserable capitalist patriarchy.”

In her job, as an “astrobiological theorist,” whose responsibilities include travelling to Roswell, Severine wears a lab coat; her off-the-job wardrobe is rather more vampy, as when, in prelude to group sex, she shrink-wraps herself in a silver dress, and Ford says, “Whoa! You look like a sex robot!” “I am a sex robot,” she replies, in a tone that opens the possibility that she is not kidding. I wouldn’t be surprised to hear that her father is the computer system from “Alphaville.” Araki is besotted with Jean-Luc Godard, and debates between Ford and Severine about polyamory play like an easy-reader revival of dialectical exchanges from Godard’s films. The deliberate stiffness of Mesquida’s line readings and the deadpan kitsch of Severine’s paranormal day job set a fine B-movie baseline for a show that cultivates a soft-porn texture.

Uly’s other B.F.F. is Carly (Kelli Berglund), a fledgling actor outfitted, by the show’s costume department, in deliriously candy-colored getups and, by the writers’ room, with a healthy sense of buried rage. To pay the bills, Carly performs as a camgirl, jadedly catering to a whole Krafft-Ebing catalogue of fetishes. When one client submissively expresses his willingness to do anything, she forces him to help run lines to prepare for an audition. Bringing her work home with her, Carly explores sadomasochism with her boyfriend, Jethro (Desmond Chiam), an actor who is comically vain about credits that he’s earned playing corpses on network procedurals. 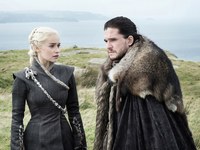 Winter Is Here: Remembering the Plot of “Game of Thrones” 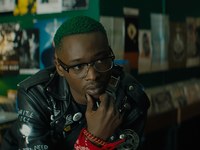 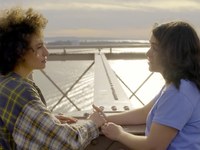 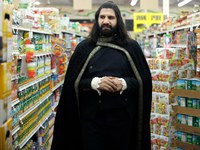 The Giddy Thrill of “What We Do in the Shadows,” A Show About Bloodsucking and Bootlicking 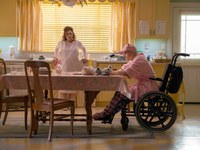 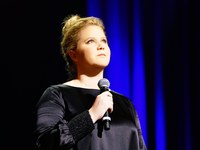 All the while, the nominal hero is troubled by the spirit of a date who disappeared. Uly meets a trumpet player named Gabriel (Tyler Posey), a name shared, of course, with the prophetic archangel. Araki doesn’t do subtlety, and you wouldn’t want him to try. To deride this series as uneven would falsely imply that it shows the least interest in steadiness. At the end of a miracle of a first date—a rendezvous radiant with a sense of discovery—Gabriel gets Uly off, and the sky goes all purple, like a little death bursting into a big bang. “Was it just me,” Uly asks, “or did it feel like the universe collapsed in on itself for a second?” Gabriel ghosts, and Uly is haunted by premonitory dreams that he and his vanished lover are meant to save the earth from annihilation.

Araki’s way of image-making, his type of MTV expressionism, relies on vibrant color to maintain flows of mood essential to the substance of the content. Here, at every turn, he soaks the boys and girls in an exhilarated violet light only fleetingly seen in his earlier movies. The shade, somewhere between a Bouguereau mauve and Andy Warhol’s “Lavender Disaster,” incorporates the values of a lurid sunset, a screen’s glow, and a fashionable young millennial’s idea of neon delirium. The euphoric quality of the light helps to shape a mood, and the extravagance of it is in line with Araki’s proclivity for using doomsday-sci-fi tropes to express the emotional weather of young people, for whom every romantic setback feels like the end of the world.

You would have also noticed this color if you tuned in to the recent season finale of “Slutever,” a Viceland series hosted and executive-produced by Araki’s co-writer on “Now Apocalypse,” Karley Sciortino. It emanates from the accent lighting at Pumps, a strip club in Bushwick. In reviewing Sciortino’s 2018 memoir of the same name, my colleague Naomi Fry noted that Sciortino “has created a mini empire of slutdom, with her column and a TV show, in which she explores sexual behavior in the modern world.” “Slutever” combines participatory journalism—Sciortino is the George Plimpton of sex-positive feminism—with voyeurism that’s somewhat redeemed by good will.

It is a habit of Sciortino’s to simultaneously parrot and parody “Sex and the City.” (It’s as much a component of her screen persona as a fringe of pink marabou that decorates her microphone’s windscreen during her person-on-the-street interviews.) An episode titled “Sugar Babies” begins with a Bradshavian rhetorical question: “As the slutty feminist that I am, I can’t help but wonder: Is being a sugar baby the world’s greatest life hack?” Her voice, with its earnest curiosity and strategic impudence and mitigated prurience, is a crucial modifier of Araki’s idiom in “Now Apocalypse.” “Slutever” delivers the light satisfaction of indie-pop anthropology. “Now Apocalypse” applies its research to a supernatural sex farce groping toward Pop-art sublimity. It’s ridiculous, but still it works to rapture.

The “marshmallow test” said patience was a key to success. A...

The Best and Worst of the 2018 Super Bowl Commercials |