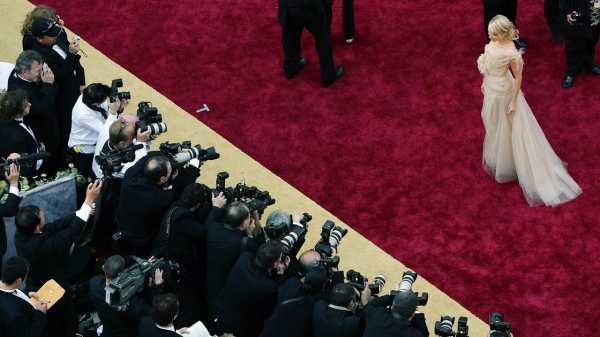 A history of the red carpet, from Aeschylus to Joan Rivers.

It’s been a drama-filled year for the Academy Awards, from the saga surrounding Kevin Hart’s withdrawal as host to complaints about cutting categories from the broadcast in the interest of shortening the ceremony. At least one aspect of the Oscars, however, gets bigger and more sprawling with every year: the red carpet. Hours of coverage are now devoted to celebrity arrivals, with fashion houses, entertainment correspondents, publicists, and Twitter instacritics all getting in on the pandemonium. In the video above, my colleague Naomi Fry and I discuss the history of the red carpet—surprise! It dates back to Aeschylus—and its future. Although the red carpet has been a part of Hollywood premières since the silent era and a part of the Academy Awards since the early sixties, it became a beast unto itself in large part because of Joan Rivers, who began hosting her barbed red-carpet specials in the nineties, with her daughter, Melissa. The “Joan Rivers effect” made the whole enterprise funnier and—for the starlets on display—scarier. Soon the red carpet became its own cottage industry, with the E! network employing such dubious innovations as the “Glam Cam 360” and picking outfits apart on “Fashion Police.”

But the tide may be turning. In the past few years, female stars have pushed back against scrutinizing excesses like the “Mani Cam,” and campaigns such as #AskHerMore have tried to replace the inanity—and misogyny—of the red carpet with something akin to substance. At last year’s Golden Globes, celebrities responded to explosive reports of sexual abuse and harassment in the industry by showing up in black, wearing Time’s Up pins, and bringing along activists as plus-ones. It was a stunning turning of the tables that may signal a new, more political tone for the red carpet. Or maybe not. The status quo has a strong magnetic pull, and, at this year’s Globes, the questions mostly reverted to the standard fare: “Are you excited to be here?” “What was it like to work with so-and-so?” We’ll find out on Sunday, February 24th, if the road to the Oscars is truly evolving.

A Restaging of “Lolita, My Love,” the Musical “Too Dark to...

No. 3 in command at the Justice Department will be soon...