In 2011, a young chef named Dan Giusti quit his job at the helm of 1789, a long-established restaurant in the Georgetown neighborhood of Washington, D.C., and boarded a plane for Copenhagen. Like many ambitious cooks, he had applied for a job trial at the original Noma, which was widely considered to be the best restaurant in the world. Unlike most other ambitious cooks, he swiftly rose through the ranks to become Noma’s head chef. But, after running the kitchen for three years, Giusti felt his enthusiasm for fine dining wane. “At Noma, we were forty-five people feeding forty-five people,” he recalled recently. “I realized that I wanted to feed a lot of people, and feed them every day.” He thought about opening a counter-service chain—another Sweetgreen or Shake Shack—but felt that the choices were already too abundant. What was the point? So his mind went to institutions—schools, in particular—where, despite a larger cultural shift away from industrial foods, there had been little innovation or improvement in decades. He saw both a moral purpose and a business opportunity.

Giusti is not the first fine-dining chef to show an interest in school-food reform; Jamie Oliver, Bill Telepan, Alice Waters, Tom Colicchio, and others have volunteered their time to try to combat the prevalence of chicken patties and chocolate milk in American cafeterias. But he is among the first to take on the challenge not as an after-hours project but as a full-time professional calling. In 2016, after returning from Denmark, Giusti embarked on a whistle-stop tour of the school districts around the country vying for his talents. He was on the lookout, above all else, for a community that was thoroughly committed to transformation. Giusti found that in New London, Connecticut, a district of three thousand five hundred students spread among seven schools, where the poverty rate is above average. He settled there in April of the same year and launched his company, Brigaid.

When I visited New London’s Winthrop Elementary, on a Wednesday toward the end of the school year, workers in aprons and Kelly-green Brigaid T-shirts were retrieving bins of kale Caesar salad from the walk-in refrigerator and replenishing jugs of ice water. One cook drained a batch of whole-wheat penne and mixed it with chicken and an Alfredo sauce made from scratch; another stood cutting pineapple and honeydew and loading them into clear plastic tumblers—the method that Brigaid has found makes fruit most attractive to kids.

At 10:40 A.M., a hundred seven- and eight-year-olds streamed inside from the playground, lining up for their lunch trays. Giusti, who is six feet six, with heavy features and a dark beard, peered across the lunch line into the cafeteria to assess the vibe: a plate of house-made hummus, garnished with a mélange of fresh vegetables, feta, and a dash of za’atar, the Middle Eastern spice blend, was competing with that Alfredo dish, and so far, to his disappointment, there were only a few takers. Kids wiggled in their seats, surreptitiously poking one another, fishing around for their favorite ingredients and then trashing the rest—basically, being second graders at lunch. “We spend so much time and effort, and, at the end of the day, the bell rings, the kids eat lunch, and they’re not thinking a second longer about it,” Giusti told me later on. “Going from a place where people were scheduling their vacations around eating at your restaurant, where for some people it’s the highlight of their year, that was maybe the hardest thing.”

In June, René Redzepi, of Noma, became Brigaid’s first investor. By phone recently from Copenhagen, he told me that he sees Giusti’s career transition as part of a larger generational shift in how talented young cooks view their career options. “If I think back fifteen years, you’d be considered a complete flop if you weren’t at a fine-dining restaurant,” Redzepi observed. “If you were cooking tacos, you were out of the circle. That has completely shifted. People view anyone who has the rigor to cook up a good meal, a bowl of rice or a plate of tacos, if you do it the best you can, it’s the same effort. Once cooks realize this, the doors open to so many other things.” 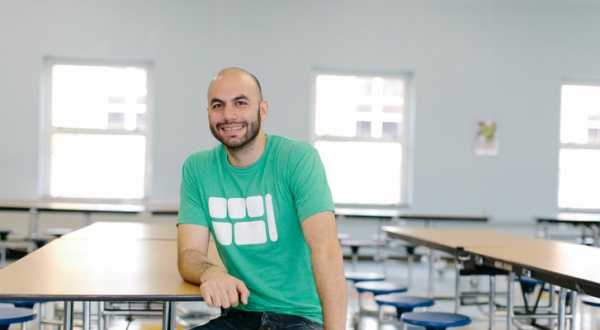 “When you put a chef in a school kitchen, there’s a bunch of things that start happening right away,” Dan Giusti said of Brigaid’s strategy.

The American school-lunch program as we know it was born in 1946, when President Truman signed the National School Lunch Program into law. About seven million children participated in the first year; today, that number has grown to over thirty million, two-thirds of whom meet the income requirements to eat on the federal government’s dime. Food in schools has never been a gourmet affair, but, after President Reagan slashed the program’s budget during the nineteen-eighties, it became particularly forlorn—this was the era that saw a proposal to classify ketchup as a vegetable. By the early two-thousands, childhood-obesity rates had skyrocketed, and school meals anchored around the likes of chicken-fried steak fingers and oil-sodden pizza began to attract scrutiny.

In 2010, spurred on, in part, by support from First Lady Michelle Obama, years of lobbying efforts paid off: Congress passed the Healthy, Hunger-Free Kids Act, which put in place stringent national nutrition standards for school food and is viewed by reformers as a comprehensive victory. Today, at the policy level, school lunch operates uniformly across America’s almost fourteen thousand public-school districts. Nutrition requirements are federal, as is the per-meal budget—the government reimburses schools a little less than three dollars and fifty cents for each lunch, except in Alaska and Hawaii, where that amount is higher. In practice, though, the quality of meals varies drastically from school to school. Kitchen facilities differ; local labor costs vary; though per-student budgets are roughly consistent, over-all finances diverge considerably based on school size and how many students choose to participate.

Some districts, such as those of Boulder and Minneapolis, have attracted dynamo food-service directors committed to getting fresh food in schools. But, for many more, cheeseburgers in a bag and bruised apples prevail. (Wealthier districts are, paradoxically, sometimes at a disadvantage, because fewer of the children qualify for federal reimbursement and more opt to bring their lunch from home.) “You can make all the rules in the world,” the New York University professor and food-policy expert Marion Nestle told me. “But everything happens at the ground level.”

The idea behind Brigaid—the name is a play on “brigade,” the traditional system of hierarchy for cooks in a fine-dining kitchen—is to make it as simple as possible for school districts to trade processed meals for ones made from scratch, without depending on volunteers to do so. The business model relies on standard restaurant-industry math: reduce food costs by buying raw materials instead of processed ones, but raise labor costs in order to cook them. Brigaid charges the district a flat annual consulting fee—for New London this past year, it was a hundred and thirty-two thousand dollars on an approximately three-million-dollar food budget—which up to now has been paid for with a combination of surplus funds and charitable grants.

The linchpin of Giusti’s strategy is to recruit a trained chef, often a mid-career fine-dining cook, to run each school kitchen as a permanent employee of the district. In New London, the chef, Ryan Kennedy, previously ran a prepared-foods market. “When you put a chef in a school kitchen, there’s a bunch of things that start happening right away,” Giusti told me. Cafeteria employees are trained to make dressings and sauces from scratch, and learn the food-safety rules necessary for working with raw meat and poultry, to transition away from precooked options. Since taking over the cafeterias in New London, in 2016, Brigaid has made whole-grain pizza dough, and some of the bread, fresh. The only processed foods in the kitchen are cereal and pasta. (The company has also done away, perhaps most controversially, with peanut-butter-and-jelly sandwiches, which were once a mainstay—Giusti said that he still gets irate e-mails from parents.)

Savings on food costs alone aren’t enough to make up for the extra labor the district has needed to hire, so Brigaid has come up with other methods of raising revenue for the district’s food-service budget. Every week, for instance, one school hosts a “community dinner,” effectively turning the cafeteria into a quick-service restaurant open to the public, serving meals for five dollars per plate. On the day I visited, it was rib night, and Giusti anticipated that the meal would earn the district five hundred dollars in profit. Cooks in New London now also use their afternoon downtime to prepare take-home dinners for teachers and staff, and sell them for eight dollars a piece. This fall, Brigaid will expand operations to six schools in the Bronx, where as little as fifty per cent of students buy lunch in some schools; the company is banking on an increase in customers once they bring up the quality of the offerings. In New London, two years in, Giusti says that the district is close to breaking even.

It is not yet clear, though, whether Brigaid’s model will be able to scale up enough to impact the public-education system at large. For one, there is the matter of the kitchens. Brigaid’s approach requires, among other things, a stove, an oven, refrigerated walk-ins, and a kitchen space big enough to do the bulky work of cooking from scratch. Many schools lack even those basics. When I asked Bettina Elias Siegel, who has been writing on the topic of school lunch since 2010, about her impressions of Brigaid, she raised questions about the startup funding needed to get the program off the ground. Brigaid’s work in New London has required hundreds of thousands of dollars in seed funding to cover both small enhancements to the kitchens and budget shortfalls throughout the transition period. How many schools have a budget surplus to draw on for the purpose? And how many private grants are available? “I don’t like the notion where good school food is luck of the draw,” Siegel said. “That’s not the way a national school-lunch program should look.”

For dozens of companies, however, feeding children at school is already big business. Despite over a decade of nonprofit efforts, a growing portion of schools outsource their cafeteria operations to for-profit food-service operators like Aramark and Sodexo (the latter of which, in 2010, paid a twenty-million-dollar settlement to New York State after complaints of overcharging its customers). Even districts that run their own cafeterias do so largely with the help of heat-and-eat turkey burgers and sweet-potato wedges, furnished by processors like Cargill and McCain. Meanwhile, the federal government is unlikely to emerge as a champion of cooking from scratch; Marion Nestle told me that she thought the idea that the current Administration would stump up any kind of support to improve food quality was “out of the question,” so any alternative strategy should be on the table. “If a consultant like Brigaid comes in and can solve that problem, the food is good, and they’re held accountable over time, I think it sounds like a terrific solution.”

Most German Military Helicopters Not Ready for Use – Report

After Maxwell’s Arrest Prince Andrew’s Only Option is to Cooperate With...

Deutsche Bank’s German office raids (apparently) have nothing to do with...