Home Culture The Exhibit That Painted Itself | 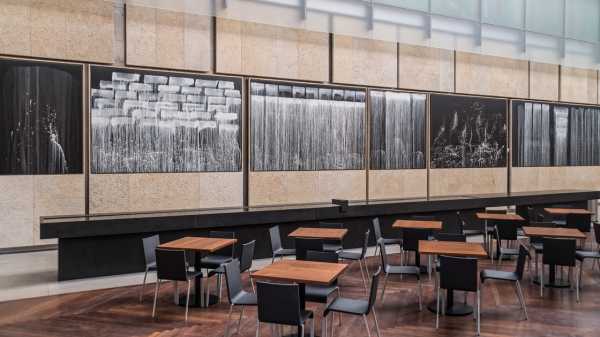 In 1933, the first time that the Barnes Foundation asked an artist to paint something to fit specifically into its walls, the artist was Henri Matisse. Matisse, who had to be convinced, rented a warehouse in Nice to work on what became “The Dance,” only to discover, after a first try, that he’d gotten the measurements wrong. (In 1990, the early version of the triptych mural was discovered and ended up at the Musée d’Art Moderne, in Paris.) Not surprisingly, the second painter to be commissioned by the Barnes, Pat Steir, asked the Barnes to send their own measurements. Then she doubled-checked them herself. Unlike Matisse, Steir grew up going to the Barnes, not to mention the Philadelphia Art Museum, a view of which happens to be visible from the Barnes’s Annenberg Court, the gallery that now displays the works that she made: eleven seven-foot-tall, black-and-white oil-on-canvas drip paintings. “I used to not go to high school and take the bus to the Philadelphia Art Museum, where I would sit on the floor and eat apples and get kicked out,” she said, peaking at the reception for her new show, which formally opened on Friday and runs through November, 2019.

Eight and a half decades after Matisse’s attempt, the second set of commissioned paintings are also gorgeous. “Silent Secret Waterfalls: The Barnes Series” is a continuation of the waterfall series that Steir first began making in the nineteen-eighties: giant works in which the paint, thinned and liquefied, drips down the canvas, working across the surface almost on its own. Steir sets the parameters and allows the paint to work from there. “It’s a joy to let a painting paint itself,” Steir says in a new documentary about her life and work. “It takes away all kinds of responsibility, because I can come in in the morning and say, ‘Oh, look what the paint did!’ ”

What the paint did in these paintings at the Barnes is beautiful—a roomful of wonder that is difficult to take in. Of course, where, when, and how the paint was permitted to work was rigorously defined at the start by Steir, who practices a John Cage-inspired notion of planned chance. Note, however, that these paintings are emphatically not abstract. What’s mesmerizing about “Silent Secret Waterfalls” is the way that the viewer is moved to abstract thoughts by the sumptuous facts of the paint itself—the straight drips, the tiny bends in the stream-like movements toward the floor, the caking and cracking, the weak washes that feel like mists. (The very few quietly hand-drawn lines come across as emotional exclamation marks.) If you look long enough at the various waterfalls, you perceive water that isn’t there. The paintings become an opening into the depths of what you might call your sensual imagination, and they become nature paintings not because they paint nature but because the paint is set free and allowed to do precisely what it does in nature. Sitting in the courtyard is a transcendental experience: surrounded on two sides by the huge panels, you feel as if you are in a ninth-century poem by Han Shan.

At the opening reception, the seventy-eight-year-old painter made her way to a makeshift stage in the interior courtyard, to sit for a brief interview with Thom Collins, the Barnes’s director, who offered a quick biography. Born in Newark, New Jersey, Steir studied at Pratt, in Brooklyn, and edited and contributed to various magazines including Semiotext(e) and the pioneering feminist art magazine Heresies. With Sol LeWitt, she helped found Printed Matter, the bookstore, arts space, and artists organization, in 1976. LeWitt influenced her work as a painter, as did Cage and Agnes Martin. Both encouraged her to work without critiquing herself, and she quoted Cage as saying, “Don’t judge your work while you make it. Just make it. Don’t hold back.” “What I learned from Agnes Martin was more deep and intense, which is that you make art because you have to make art,” she said.

When Steir began to create her waterfalls, she was responding to prominent painting styles, in particular the drip that characterized Abstract Expressionism. “I’m not a fan of Abstract Expressionism,” she told Collins. As she sees it, the Abstract Expressionists paint angst. “Why fight with a painting?” she asked. (She is known for having once said, “If you want to express yourself, go see a therapist.”) Describing the creation of her first waterfall painting, she recalled pausing in her studio after allowing paint to drip on a canvas, not knowing precisely where she was headed, and discussing it first with her then studio assistant, Andy Moses, and next with her husband, Joost Elffers. Moses arrived as she was working. “Andy said, ‘Leave it like that!’ ” Steir recalled. “So I left it and said to Joost, ‘Should I leave it like that?’ And Joost said, ‘Yes.’ And so that painting is now in the Met.”

Stan Wawrinka finds reasons to be cheerful despite Wimbledon exit

Philippines Prepares for Evacuation as Typhoon Ambo Strengthens Amid Pandemic –...