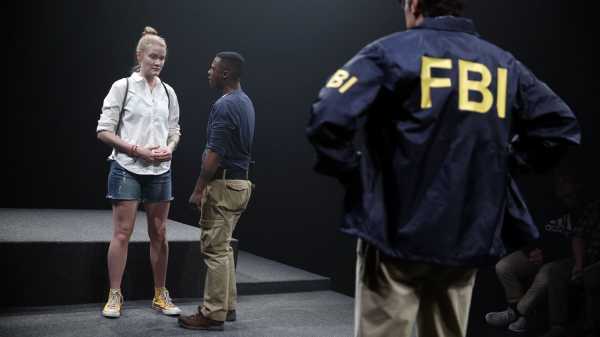 On the afternoon of June 3, 2017, a twenty-five-year-old N.S.A. contractor named Reality Leigh Winner came home, with a bag of groceries, and found herself confronted by several F.B.I. agents. An agent named Justin C. Garrick told her that he was there to investigate the possible mishandling of classified information and asked if they could “sit down” and “kind of go over what’s going on.” Winner let him and his colleagues inside. “Definitely here to, um, comply,” she said. A little more than an hour later, she had confessed to providing the media with classified documents that described Russia’s attempts to hack state-election systems during the 2016 Presidential race. She was arrested that evening and sentenced to five years in prison in August of 2018.

Last December, while Winner was awaiting trial (she eventually pleaded guilty), the playwright Tina Satter discovered the transcript of Winner’s interrogation, which the F.B.I. had released, in court filings, a few months before. She began reading and couldn’t put it down. “I had never read anything like that,” Satter told me. “Literally, I was, like, ‘This is a play.’ ” Satter is the founder and director of the experimental theatre company Half Straddle. Her company has turned the transcript into a play titled “Is This a Room? Reality Winner Verbatim Transcription,” which follows the original document verbatim and runs a little more than an hour. It ran at the Kitchen earlier this month.

Since 2008, Half Straddle has staged ten plays by Satter: dark, funny productions that draw their jittery energy from the linguistic particulars and petty hierarchies of insular worlds. Satter finds roominess in claustrophobic dialogue by letting complex relationships unfurl through sparse exchanges that are peppered with well-placed “likes” and “uhs.” When she first started writing plays, she was drawn to the neo-realist works of playwrights like Richard Maxwell. Previous works of hers have typically revolved around “girlhood-adjacent” subcultures, such as dance troupes, sports teams, or close-knit teen-age siblings. Satter was very close with her sister when they were growing up, and both were serious field-hockey players. That relationship and that sport were, she said, “ur-experiences” that she later tried to replicate in theatre. “They were these fully formed female worlds with everything you needed.”

When Satter read the Winner transcript, she was reminded of “this kind of self-assured female character that is the heart of what I’m interested in.” Rather than wilt, Winner—who, one must assume, had a very good guess about why F.B.I. agents had shown up at her house—resists their questions by feeding them a series of alternative hypotheses to explain why they’ve been led to her on a tip. The agents break her down by asking her to repeat herself and by suddenly diverting to questions about Winner’s interests, which include speaking foreign languages (she is fluent in Dari, Farsi, and Pashto), fostering stray animals, and competitive powerlifting. Although Winner is not technically in custody, it’s obvious that she is intimidated, and Winner’s lawyers later argued that she should have been read her Miranda rights. (Non-custodial questioning sessions, like these, which the F.B.I. isn’t required to record, are controversial, since law-enforcement officers deliberately feign friendliness to get subjects to confess without informing them that they are suspected of a crime.) When Satter saw footage of the room where Winner was questioned—a tiny spare room in her house, usually left unused—the size of it awoke in her a kind of “primal” aversion, she told me. As Winner answers the agents’ questions, their conversation hovers in a surreal space: a friendly exchange that everyone knows is in service of something sinister.

Winner possesses an unmistakable, authentic, and very endearing sense of humor, which radiates irrepressibly from the transcript’s center. When the agents show her a search warrant, which lists her height and weight, Winner cracks, “A hundred and fifty-four pounds? You guys flatter me.” She provides dutiful answers to their questions about her job at the N.S.A., but Winner’s charisma, wisecracking, and facility at parrying the agents’ questions show the precariousness of her role as someone deeply embedded and yet inherently marginalized within the male-centered worlds of law enforcement and the military. (Winner served for six years as a linguist in the Air Force.) When the agents ask her about the weapons in her home, Winner rattles off three types of guns, including an AR-15, a revelation greeted with a blend of condescension and praise:

Agent Taylor: Is it pink?

Winner: How did you know? [Laughs.]

Exchanges like these dazzle and repel. “You’re like, what is this conversation?” Satter said. “It doesn’t totally follow normal codes. It’s not this girl-against-the-wall interrogation thing.” She went on, “To me, the fact that there is all this humor that was staying there . . . it just gives it this richness.”

During a rehearsal in November, Satter sat on the sidelines, in a leopard-print sweater and Nikes, fine-tuning the heightened quality that she wanted her actors to bring to their lines. “Unnatural, a little more unnatural!” she cooed. Except in “Seagull (Thinking of You),” her 2013 reimagining of Chekhov’s “The Seagull,” Satter has never used found text as the basis for her work. She felt that much of the Reality Winner play’s success would depend on finding a dramatic rise and fall in the script’s relentless circularity. “My main concern is I never want it to feel like it’s jumping around in time,” she told me. “If you are totally cold to the text, you might not understand it is sequential.” Indeed, the agents shift so abruptly from interrogation to chitchat that, when I read through the script for the first time, I assumed that Satter must have moved pieces of their conversation around. (She did not.)

“I think that’s their technique,” Satter said. “To slowly disorient her, to keep the pressure on, to ask so many questions.” She and her actors were working on an early scene, in which the agents ask one another a series of “Who’s On First”-esque questions about the location of Winner’s cat. (“There’s a cat in the house. In the bed—where.” / “It was on the bed.” / “On the bed. O.K.” / “Or it was on the bed.” / “It’s . . .” / “It’ll maybe go under the bed at some point.”) “Weirdly overplay that!” Satter encouraged. She corrected herself: “We can slightly overplay it.”

Because Satter usually writes parts specifically for the actors in her company, one might assume that the inflexibility and dryness of a transcribed text would be cumbersome. But Satter was drawn to the choppy, stilted nature of transcribed speech, which, when her actors remain rigorously faithful to it, is surprisingly rich. In efforts to animate a transcribed interruption, the actors referred regularly to their scripts, to catch the complex order of operations. The sound designer, Sanae Yamada, wafted a series of audio cues through the room, giving an ominous backdrop to the posturing and occasional doltishness of the agents, which can often be quite funny. The three interrogators are played by Pete Simpson, T. L. Thompson, and Becca Blackwell—comedic performers who bring a kind of “slipperiness and jokiness” to the stock masculinity of their roles, Satter told me.

Winner is played by the phenomenal actor Emily Davis, who bears a striking similarity to the real-life Winner: both are droll blondes with South Texas roots. The two even have a distant personal connection: Davis’s mother is childhood friends with the reporter who has extensively covered Winner’s case in the Corpus Christi Caller-Times, Winner’s home-town paper. This interweaving of the transcript and her actors’ lives lent Satter a sense that the play is not just relevant to her political interests but personally relevant to those around her. “My gosh, Reality even looks like Emily,” Satter said. Winner has corresponded with Davis from jail, and both Satter and Davis have been in touch with Billie Winner-Davis, Winner’s mother.

None of Satter’s previous work has dealt directly with politics, and many of her prior productions contain fanciful song breaks and dance numbers. But, like many of her peers, Satter experienced a kind of whiplash when Trump was elected, and she began to feel conflicted about how her creative predilections intersected with her responsibilities as a citizen. “Starting in November of 2016, I felt the mandate had shifted,” she told me. “Do you stop everything? I mean, I went through all this. Do you stop making work? What do you do?” “Is This a Room?” isn’t entirely free of whimsy—the production required the services of a puppet-maker—but, in Winner, and in the “true surreality” of her story, Satter has found a way to address the current landscape while keeping her artistic instincts for outlandishness intact. “This tracks my daily questions—what does it mean to be a patriot?,” she said, noting that Winner herself, “this person at the nexus of all this,” still “doesn’t seem to have any answers.”

The actors took a break, and they descended sleepily into their phones to text and check the news. After a few quiet moments, Blackwell shrieked, “Manafort met with Assange in the Ecuadorian Embassy!” (The story was later called into question.) For a minute, no one seemed to know what to say. It was the kind of group silence that often greets a new headline, especially when it is excitedly delivered aloud—a very specific, very exhausted kind of overload, as listeners try to assemble a meaningful reaction to the ever-more bizarre.

“That is wackadoo,” Blackwell supplied.

“We are living in the upside down,” Thompson said.

Blackwell stood to resume rehearsal, squaring off their shoulders to lean in toward Davis. They agreed with Thompson. “We will never go back.”

Paul Pogba thinks he is being judged differently to other Premier...

5 questions about labor strikes that you were too embarrassed to...