Home Culture The Ford-Kavanaugh Hearings Will Be Remembered As a Grotesque Display of Patriarchal... 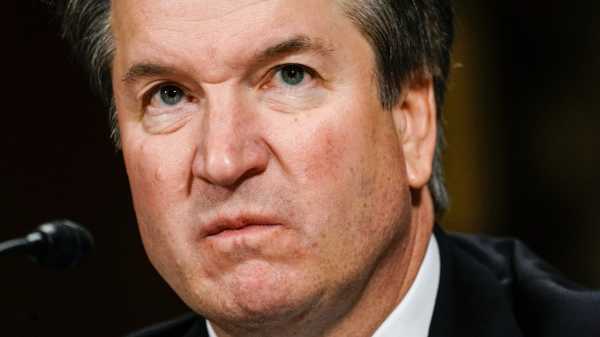 Judge Brett Kavanaugh is almost certainly going to be appointed the next member of the Supreme Court of the United States. Whatever Christine Blasey Ford said in her testimony before the Senate Judiciary Committee on Thursday, and whatever Kavanaugh said in his, and however credible and convincing either one seemed, none of it was going to affect this inevitability. The Republicans on their own have the necessary votes. A veneer of civility made it seem as if the senators were questioning Ford and Kavanaugh to get to the truth of whether Kavanaugh, as a drunk teen-ager, attended a party where he pinned Ford to a bed and sexually assaulted her, thirty-six years ago. But that’s not what the hearing was designed to explore. At the time of this writing, composed in the eighth hour of the grotesque historic activity happening in the Capitol Hill chamber, it should be as plain as day that what we witnessed was the patriarchy testing how far its politics of resentment can go. And there is no limit.

Dressed in a blue suit, taking the oath with nervous solemnity, Ford gave us a bristling sense of déjà vu. “Why suffer through the annihilation if it’s not going to matter?” Ford had told the Washington Post when she first went public with her allegations. With the word “annihilation” she conjured the spectre of Anita Hill, who, in her testimony against Clarence Thomas, in 1991, was basically berated over an exhausting two-day period, and diagnosed, by the senators interrogating her, with “erotomania” and a case of man-eating professionalism. Ford’s experience—shaped by the optics of the #MeToo moment, by her whiteness and country-club roots—was different. The Republicans on the committee, likely coached by some consultant, did not overtly smear Ford. Some pretended, condescendingly, to extend her empathy. Senator Orrin Hatch, who once claimed that Hill had lifted parts of her harassment allegations against Thomas from “The Exorcist,” called Ford “pleasing,” an “attractive” witness. Instead of questioning her directly, the Republicans hired Rachel Mitchell, a female prosecutor specializing in sex crimes, to serve as their proxy. Mitchell’s fitful, sometimes aimless questioning did the ugly work of softening the Republican assault on Ford’s testimony. Ford, in any case, was phenomenal, a “witness and expert” in one, and it seemed, for a moment following her testimony, that the nation might be unable to deny her credibility.

Then Kavanaugh came in, like an eclipse. He made a show of being unprepared. Echoing Clarence Thomas, he claimed that he did not watch his accuser’s hearing. (Earlier, it was reported that he did.) “I wrote this last night,” he said, of his opening statement. “No one has seen this draft.” Alternating between weeping and yelling, he exemplified the conservative’s embrace of bluster and petulance as rhetorical tools. Going on about his harmless love of beer, spinning unbelievably chaste interpretations of what was, by all other accounts, his youthful habit of blatant debauchery, he was as Trumpian as Trump himself, louder than the loudest on Fox News. He evaded questions; he said that the allegations brought against him were “revenge” on behalf of the Clintons; he said, menacingly, that “what goes around comes around.” When Senator Amy Klobuchar calmly asked if he had ever gotten blackout drunk, he retorted, “Have you?” (He later apologized to Klobuchar.)

There was, in this performance, not even a hint of the sagacity one expects from a potential Supreme Court Justice. More than presenting a convincing rebuttal to Ford’s extremely credible account, Kavanaugh—and Hatch, and Lindsey Graham—seemed to be exterminating, live, for an American audience, the faint notion that a massively successful white man could have his birthright questioned or his character held to the most basic type of scrutiny. In the course of Kavanaugh’s hearing, Mitchell basically disappeared. Republican senators apologized to him, incessantly, for what he had suffered. There was talk of his reputation being torpedoed and his life being destroyed. This is the nature of the conspiracy against white male power—the forces threatening white men will always somehow be thwarted at the last minute.

The Hill-Thomas hearings persist in the American consciousness as a watershed moment for partisanship, for male entitlement, for testimony on sexual misconduct, for intra-racial tension and interracial affiliation. The Ford-Kavanaugh hearings will be remembered for their entrenchment of the worst impulses from that earlier hearing. Thursday’s ordeal confirms that male indignation will be coddled, and the gospel of male success elevated. It confirms that there is no fair arena for women’s speech. Mechanisms of accountability will be made irrelevant. Some people walked away from 1991 enraged. The next year was said to be the Year of the Woman. Our next year, like this one, will be the Year of the Man.

Assassin Who Killed ‘Father’ of Bangladesh Bangbandhu Executed by Hanging