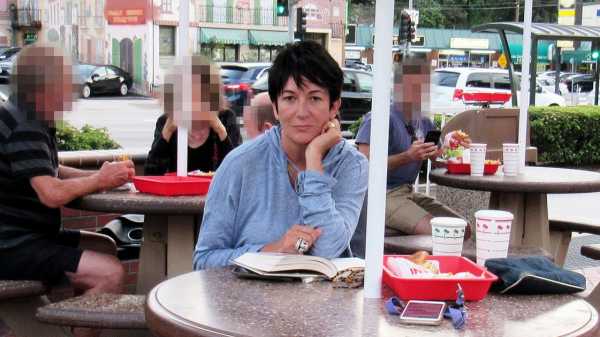 On Thursday afternoon, the New York Post published a picture that, the newspaper reported, was taken at an In-N-Out Burger in the San Fernando Valley, on Monday, and sent in by an anonymous source in Los Angeles. The photo showed Ghislaine Maxwell sipping a shake and munching on fries and a burger while sitting alone at one of the restaurant’s outdoor tables. Maxwell is the fifty-seven-year-old daughter of the British newspaper magnate Robert Maxwell, who embezzled hundreds of millions of dollars from the pension funds of his employees, and then drowned in 1991, under murky circumstances, off the coast of the Canary Islands. In the ensuing quarter century, she had been the confidante of Jeffrey Epstein, the multimillionaire hedge-fund manager and convicted sex offender, who, on Saturday morning, hanged himself in his jail cell, at the Metropolitan Correctional Center, in New York. Epstein had been held at the facility since July, when federal prosecutors from the Southern District of New York accused him of running a sex-trafficking operation that involved dozens of underage girls. In court papers that were unsealed on August 9th, it was alleged that Maxwell had been Epstein’s central accomplice, first as his girlfriend, and, later, as his trusted friend and procuress, grooming a steady stream of girls, some as young as fourteen, coercing them to have sex with Epstein at his various residences around the world, and occasionally participating in the sexual abuse herself. In the documents, which stemmed from a defamation suit that was brought against Maxwell, in 2015, by Virginia Giuffre, one of the reported victims, and was settled out of court, Maxwell emerges as an ominous presence. She refers to the girls as her “children,” and, according to a deposition, calls one her “slave.” Maxwell, for her part, has denied all allegations, and has never been arrested or charged.

Ever since Epstein’s arrest, in July, his story has generated intense public interest. How was his criminal operation able to function essentially in broad daylight, at such a scale, and for so long? Did any of the prominent and powerful people in his circle know? Far from ending the speculation, Epstein’s death, as my colleague John Cassidy has written, only increased the frenzied fascination with the affair. James B. Stewart noted in the Times that Epstein claimed to be privy to the dark secrets of many powerful and wealthy individuals. Conspiracy-minded people began to wonder whether Epstein had been murdered by accomplices to silence him. (Donald Trump retweeted a post that seemed to imply that the Clintons were behind it.) On Thursday, the Washington Post claimed that an autopsy had revealed broken bones in Epstein’s neck, which, though consistent with suicide by hanging, were more typical of death by strangulation. Medical experts have since questioned this analysis. On Friday, the autopsy findings were released, and the official ruling is that Epstein’s death was a suicide. Most of the conspiracy theories regarding Epstein’s death are likely to be untrue, but they have clearly been stoked by the fact that the crimes the financier committed in life appear to have, for once, involved a real conspiracy.

But the central figure of the Epstein affair in the past week has been Maxwell. The youngest of Robert Maxwell’s nine children, and reportedly his favorite, Ghislaine attended Marlborough, a boarding school in England, and Oxford. Her father sent her to New York as his emissary, in 1991, to foster the Daily News, which he had recently purchased. After his ignominious death, she was left with a mere hundred thousand dollars per year to live on. She began to sell real estate, and soon started dating Epstein, who was well connected. A multitude of pictures from the past three decades in which the socialite is seen beaming, cheek to jowl, wearing gaudy Upper East Side-lady finery, with a variety of bold-faced names at various galas, give the impression that she would have attended the opening of an envelope as long as it was gold-embossed. But, in 2016, not long after Giuffre’s defamation suit, Maxwell abruptly disappeared from public view. On Wednesday, the Daily Mail reported that she was residing in a mansion outside Boston, in Manchester-by-the-Sea. But before the surprise of that revelation had abated, the picture from Los Angeles delivered a new jolt.

Twitter, of course, had a field day. One user attempted to divine her order (“she did not go protein style”). Another joked about her attire (“Ghislaine Maxwell spotted at In N Out Burger wearing ‘NOT INVOLVED IN HUMAN TRAFFICKING’ t-shirt”). A meme account Photoshopped Maxwell’s figure onto a background featuring the Americana mall in Los Angeles, which made about as much sense as her presence at In-N-Out, and emphasized what seemed to be the arbitrariness of this particular mise-en-scene. The disgraced socialite had become a living iteration of “Where’s Waldo?,” apt to pop up at the unlikeliest of places. This almost surrealist unexpectedness seemed to spark viewers’ interest. A day later, Business Insider reported that punters were rushing in person to the In-N-Out location to take pictures of the table where Maxwell had dined.

The photograph was gripping in other ways too. In the picture, Maxwell seems not caught unaware but rather poised and, perhaps, posed, as if for a twisted “Wish You Were Here” postcard. (Some even speculated that the photo was orchestrated by Maxwell, but to what end?) With her calm eyes directed toward the camera, and wearing a light-blue top, her right hand adorned with an oversized cocktail ring, her short hair ruffled around her smooth face, Maxwell appeared chillingly serene. Before her was a burger, perhaps served “animal style,” which, in In-N-Out parlance, means topped with all the fixings. The anonymous photographer told the Post that Maxwell was reading “The Book of Honor: The Secret Lives and Deaths of C.I.A. Operatives,” which, if true, seemed to suggest her awareness of people’s fascination, and also their conspiracy-theory-mongering. There appeared to be, in other words, a distinct possibility that Maxwell was fucking with us. An ultra-wealthy cohort had allegedly committed a series of heinous crimes, in plain sight, with a kind of entitled shrug, and a general sense that they were above the rules of society and would never be caught. In Maxwell’s impenitent gaze, we could see the broader audacity of the Epstein affair.

To follow the shadowy mire of this saga, which potentially implicates scores of individuals and involves layers of misdirection, is to yearn for an ever-elusive clarity. As I looked at Maxwell’s photograph, it seemed to me as if she were cognizant of this, and self-consciously leaving a trail of signifiers to be close-read, only to have their sum total stop, maddeningly, just shy of meaning. As she posed against the mundane Southern California landscape—road signage directing drivers to the 101 freeway, a billboard advertising a medical-marijuana treatment center, a bus-stop ad for the comedy “Good Boys”—I felt as though Maxwell was daring us to make sense of the evil muddle in which she was allegedly a chief actor. “Here I am,” her face seemed to say. “Figure this out.” I am looking forward to the day when we do.