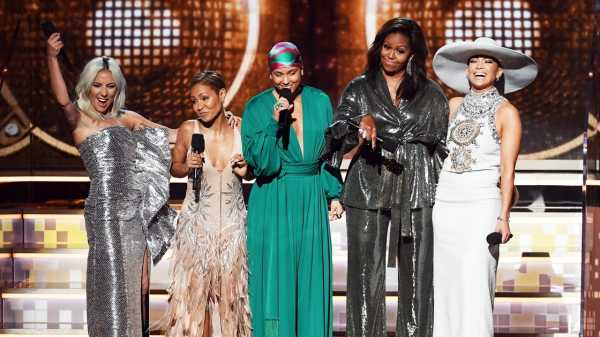 Only at the Grammy Awards does the most commercially dominant artist in the world get to play the underdog. On Sunday, Drake, after years of strategically avoiding the ceremony, accepted the award for Best Rap Song, for his feel-good anthem “God’s Plan.” His appearance was a surprise—plenty of other major artists, among them Ariana Grande and Childish Gambino, opted out of the show this year. But Drake was on a mission. He used his time on the podium to puncture the performatively convivial surface of the Grammys, effectively telling the crowd that his award was too little, too late. “The point is, you’ve already won if you’ve had people who are singing your songs word for word, if you’re a hero in your home town, if there are people with regular jobs coming out in the rain and the snow, spending their hard-earned money to buy tickets to come to your shows, you don’t need this right now,” he said. “I promise you, you already won.”

This was, of course, Drake’s way of expressing his rightful indignation at being snubbed by the Grammys many times over. But he was not just speaking for himself. His speech was a treatise on the Recording Academy’s long-running failure to keep apace with shifts in the industry, and to properly honor the work of the most commercially and culturally relevant hip-hop artists. If the Grammys can’t recognize an artist like Drake—ruthlessly palatable, innovative, and winning—how can they be trusted to document the culture? The point, Drake was trying to say, is that they cannot. Turn off your televisions and point your attention elsewhere. It’s time for the Grammys to be left behind altogether. (The broadcast quickly cut to a commercial break.)

The irony was that this protest came during one of the most forward-thinking and engaging Grammy ceremonies in recent memory. The Recording Academy is usually a punching bag for popular-music fans and artists, who have been frustrated by the show’s stodgy, rock-leaning sensibilities and the lack of diversity among its performers, nominees, and winners. After last year’s show—which featured a single female award presenter—the show was hashtagged #GrammysSoMale. When confronted about this, last January, the president of the Recording Academy, Neil Portnow, suggested that “women who have the creativity in their hearts and souls” need to “step up.” (Portnow later said that his words had been taken out of context.) The frustration bubbled over, forcing the Recording Academy to take some concrete actions to address the criticism. It launched a diversity task force, led by Tina Tchen, Michelle Obama’s former chief of staff. It opened up the major award categories to include eight nominees, rather than five; months before, it had expanded the Grammys’ voting body to help bridge the gap between those we see winning and those we see dominating the charts. Portnow also announced that he would step down once his contract runs out, this July. During his annual speech at the awards, he spoke about the turbulence his institution has faced. “This past year I’ve been reminded that, if coming face to face with an issue opens your eyes wide enough, it makes you more committed than ever to help address those issues,” he said. The Grammys want you to know that they are trying.

Last night, at least, those efforts proved surprisingly successful. Plenty of the show’s most compelling moments would have been unthinkable even a year ago. The flamboyant Atlanta hip-hop provocateur Young Thug appeared onstage at the start of the show, as part of a medley with the pop newcomer Camila Cabello, Ricky Martin, and the Colombian pop superstar J Balvin. Later, the Houston rap star Travis Scott, in a performance far more vigorous than his Super Bowl halftime appearance, last week, staged a mosh pit. The show’s host, Alicia Keys, kicked off the ceremony with remarks from an electrifying lineup of Michelle Obama, Lady Gaga, Jennifer Lopez, and Jada Pinkett Smith. A stream of female performers appeared: Cardi B delivered a potent, piano-driven rendition of her song “Money,” and a cast of country-leaning pop-superstar women performed an epic medley with Dolly Parton. If this year’s Grammys had one theme, it was female empowerment. Keys acted as part host, part doula, referring to the female performers as her sisters while exuding a sense of earthy zen.

The winners of the awards, too, have finally started to reflect the dramatic evolution of popular music. There were few of the Grammys’ trademark exasperating moments, in which cautious, old-fashioned taste defeats the obvious choice. (See: Beck winning over Kanye West, in 2015, and Adele winning over Beyoncé, in 2016.) Childish Gambino’s “This Is America” took home several awards, while Cardi B became the first woman in the show’s history to win Rap Album of the Year.

If there was any major miss, it was the near-uniform neglect of 21 Savage, the rapper who was detained by ICE last week and risks being deported for allegedly overstaying his visa. (He was born in the U.K. but has in many ways embodied the American dream.) 21 Savage was nominated for two awards, for the song “Rockstar,” a collaboration with Post Malone. The song didn’t win either award, but Post Malone performed it in a disjointed mashup with the Red Hot Chili Peppers. The song cut out just before 21 Savage’s verse, with not a word from Post Malone about his friend and collaborator. 21 Savage’s mother was not allowed to attend the ceremony on his behalf; few dared to mention his plight onstage. (Ludwig Göransson, the Swedish composer who accepted a Grammy on behalf of Childish Gambino, did; Savage’s close friend and champion Drake did not.) His absence was a stark reminder of just how conservative the Grammys remain, and how feeble they truly are as an engine for social change.

On the podium, several award winners seemed sincerely unprepared to accept their awards. Perhaps they had been trained, rightfully, to distrust the voting process and assume they would be overlooked. When she won Album of the Year, the country-pop star Kacey Musgraves stumbled over her words, struggling to get through a list of thank-yous. Cardi B was rendered speechless for perhaps the first time in her spirited career. “I just want to say thank you to everyone who was involved,” she told the crowd, stunned. Later, she posted a jubilant video on her Instagram that served as an addendum. “I’m sharing this Grammy with you, motherfucker!” she said, referring to the late rapper Mac Miller and flanked by her ecstatic team, her sister, and her husband, the rapper Offset. The speech was a raucous, improvisational, Internet-first moment—precisely the type of empowering rhetoric that the Grammys wanted to bottle. It was not a coincidence, perhaps, that it happened offstage.

‘If he fell at the first it wouldn’t have been a...

Obesity epidemic grows in adults; perhaps levels off in youth