Home Culture The Impeccably Understated Modernism of I. M. Pei | 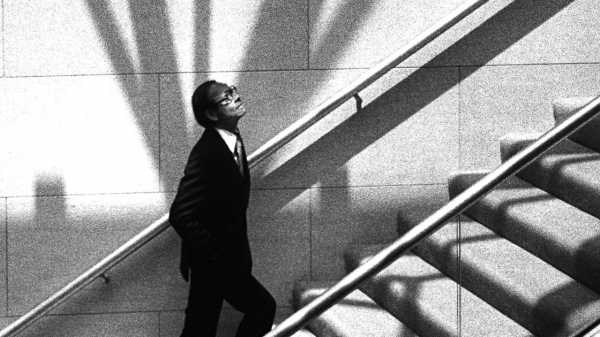 In John Updike’s story “Gesturing,” first published in 1980, the newly separated Richard Maple finds himself in a Boston apartment with a view of a startling new skyscraper. “The skyscraper, for years suspended in a famous state of incompletion, was a beautiful disaster,” Updike writes, “famous because it was a disaster (glass kept falling from it) and disastrous because it was beautiful.” The architect had imagined that a sheer glass skin would “reflect the sky and the old low brick skyline of Boston” and would “melt into the sky.” “Instead,” Updike continues, “the windows of mirroring glass kept falling to the street and were replaced by ugly opacities of black plywood.” Still, enough of the reflective surface remains “to give an impression, through the wavery old window of this sudden apartment, of huge blueness, a vertical cousin to the horizontal huge blueness of the sea that Richard awoke to each morning, in the now bone-deep morning chill of his unheated shack.” Not too surprisingly, the distressed tower becomes an oblique symbol for the state of Richard’s life, soul, and dissolved marriage, slicing in and out of the story, much as its counterpart slices in and out of the Boston skyline.

The skyscraper in “Gesturing” is unmistakably the John Hancock Tower (officially renamed 200 Clarendon in 2015), designed by I. M. Pei and finished in 1976. Modernists had dreamed for decades of a pure glass architecture, and it does not take much to see John Hancock as the complicated fulfillment of these hopes. It did, as in the Updike story, suffer from engineering failures. Its glass panes were unable to withstand the city’s intense winds. Additional study revealed that the building had deeper issues of structural integrity and might, under heavy wind, collapse. But sustained attention and repair have kept the building intact, and it remains the single most beautiful object in one of the world’s most tedious, stuffy cities—on one of Boston’s handful of pleasant blue days, it reflects and multiplies the scudding clouds.

Pei, who was born in China (his initials stand for Ieoh Ming, but he is almost invariably referred to by his British-style abbreviation), died this month in New York at the extraordinary age of a hundred and two. For the better part of a half century, Pei received major commissions all over the United States, and several beyond it, that are essential to the fabric of our cities, though we may not always recognize how his work is woven into them. He was a modernist who, unlike others, largely avoided lapel-grabbing gestures. The John Hancock Tower draws modest attention to itself, but no one would go out of the way to see it. His most famous work, the glass pyramid outside the Louvre, is still an adjunct—albeit an iconic one—to the world’s most famous museum of art. Glowing and light-filled, the pyramid is the paradoxical iconic work that has become inextricable from its surroundings; it is now impossible to imagine the museum’s fronting plaza without it.

In other words, Pei carried out the tradition of architectural modernism more thoroughly than most other architects. Trained at M.I.T., he was impressed by Le Corbusier in his youth, but he appears to have imbibed none of Corbu’s megalomania and world-making ambition. Pei was, instead, a consummate professional, one of the people who made modernism feel conservative and traditional. The East Building of the National Gallery, in Washington, D.C., married a sharp, trapezoidal construction with a monumental marble veneer. Here was a modern project that accommodated itself to the neoclassical ethos of the self-embalming American capital. It is emblematic of a figure who put up buildings everywhere that one often doesn’t know are his while at the same time becoming a figure of significant international renown, the winner of virtually every prize and form of recognition available in the field. The fact is doubly amazing because he was Asian-American in a field hostile to minorities (and to women). Though he admired masters like Louis Kahn, his work is as far from Kahn’s gnomic expressions of mystery as can be. “I worry that ideas and professional practice do not intersect enough,” he told the critic Paul Goldberger. “Maybe my early training set me back. Maybe it made me too much of a pragmatist.” 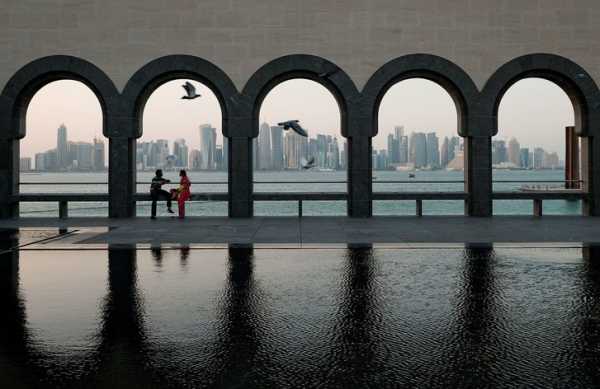 Pei’s buildings reflect and become a part of the cities around them, as in the Museum of Islamic Art, in Doha, Qatar.

One result of Pei’s longevity is that in some sense he embodied the entire drift of the modern movement—he worked throughout the latter half of the twentieth century and was implicated in its achievements and its catastrophes. The work by Pei that is geographically closest to me rises in the towers of Society Hill, just north of where I live in Philadelphia. A suite of three Miesian towers, perforated with windows like little alcoves in a sandy concrete frame, they are best seen in the morning from the Ben Franklin Bridge, as they catch the rising light over the Delaware River. The deep windows create deep shadows, enhancing a general sense of volume and presence. Compared with so much other glass-and-metal waterfront development, the towers are unassuming and light: an incredible achievement that repays continuous reacquaintance. To approach them from my neighborhood, you walk through one of the oldest districts in the city, filled with early nineteenth-century brick row houses, and ascend a cobblestoned street to a flattened plaza. As with so many modernist housing developments, there are broad expanses of useless lawn, as well as the usual array of simultaneously bizarre and anodyne public sculptures. What is unusual, in addition to the towers, is the surrounding set of modernist brick town homes, also designed by Pei, which are intended to make the transition from the historic streetscape less abrupt. Unmistakably mid-century, and with a darker brick pattern than the Federal-style homes they face, they nonetheless are of the scale of the buildings they graciously imitate.

But Pei’s formal gestures to the past mask the fact that he helped engineer a violent break with it. The Society Hill Towers are the result of one of the more aggressive urban-renewal efforts in Philadelphia history, in which the aluminum manufacturer Alcoa partnered with the New York-based real-estate company Webb and Knapp to build a luxury development intended to bring wealthier residents back to the city center. The city’s Planning Commission anticipated displacing thirty-four per cent of the residents and the razing of the neighborhood’s Victorian buildings. An entire era and style of Philadelphia architecture disappeared; so, too, did a historically black neighborhood. A four-bedroom apartment in Pei’s towers rented for a thousand and fifty dollars in 1978—near the top of the city’s rental market at the time. One aspect of Pei’s professionalism was his disinterest in the consequences of his residential and commercial work, a fact that merely made him more like most architects.

Another Pei landmark, the University Village towers, run by N.Y.U., also resulted from urban renewal, bringing to mind the old question about good architecture and its longstanding relationship with bad history. How does one admire a beautiful development, as I do with Society Hill, and not think of the immense cost incurred in producing it? Perhaps more than any other twentieth-century architect, Pei’s work invites this sort of rumination. Unfailingly intelligent in executing his projects, and moved to modern design by conviction, he nonetheless wanted his work to slip into the everyday. It is fitting that among his most impressive buildings was a tower whose function was to mirror its surroundings.

Amid Cypriot Tensions, US Navy, ExxonMobil Arrive in Mediterranean