Home Culture The Indian Filmmaker Who Made His Dad’s Village Cooking a YouTube Sensation... 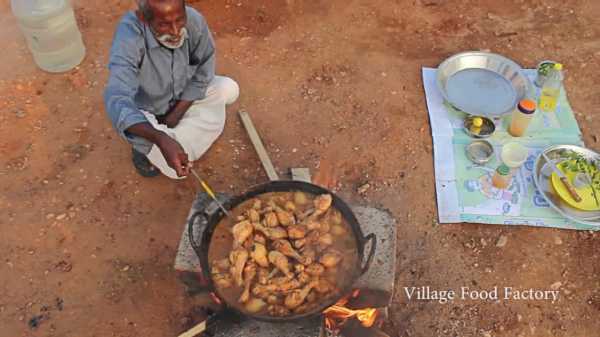 Seated on a dry patch of dirt overlooking a field in Tamil Nadu, India, a wiry, weathered man wearing a white lungi (a type of sarong) and no shoes holds up an enormous steel tray of a hundred raw chicken legs for the camera filming him. He douses them with turmeric, red-chili powder, garlic, and yogurt, and then sets a rusted wok over a fire built from hunks of bark. He fills the wok with a puddle of oil, and sets the meat bubbling with spices over the roaring fire. Farm animals whistle and bark in the distance, and people mutter in Tamil offscreen. Once the stew is done cooking, the man sets glossy clumps of rice and a few plump drumsticks onto a bright green banana leaf laid on the ground. Then he devours the meal with gusto, scooping up rice with his hands and chewing on the bones as bits of chicken fall idly out of his mouth. He looks up with a stern but utterly content expression.

The video, titled “KING of CHICKEN LEGS / Using 100 Chicken Legs / Prepared by my Daddy,” has been viewed more than sixteen million times on YouTube. That’s about sixteen times the population of the Theni district, a bucolic part of Tamil Nadu where the man, Jaymukh Gopinath, cooks huge meals en plein air, filmed by his son Arumugam, an amateur filmmaker.

Like many of the people behind accidental viral sensations, Arumugam—an energetic twenty-six-year-old who speaks only Tamil and broken English—never set out to make his father a YouTube star. Arumugam used to live in Chennai, Tamil Nadu’s capital, working as an assistant director on Tamil movies. But his salary was so low that he struggled to make a living there. In early 2016, he moved back home and decided to start filming his father cooking simply because, he told me, “I didn’t have to pay him.”

Jaymukh, who is sixty-two, learned to cook while working decades ago as a door-to-door fabric salesman. He had a hard time finding food that he liked during his travels, so he taught himself to prepare simple dishes. When he got married to Arumugam’s mother, Selvi, in 1990, he settled down in Chengalpattu, where the locals were so impressed with his culinary skills that they insisted he start a dhaba, or roadside food stand, specializing in biryani. Arumugam has fond childhood memories of his dad’s cooking. “I remember coming home from school and my dad had made pepper crabs,” Arumugam said. Jaymukh sometimes cooked outdoors for the family—the same way that his own father prepared meals.

Arumugam and Jaymukh’s first video, which was posted to YouTube on July 24, 2016, shows Jaymukh simmering crabs in a stew over a fire while a waterfall roars behind him. Arumugam said that the video had garnered just fifteen views after a few days but that, after he started asking his friends to watch, it began to catch on. The pair have since made hundreds of such videos, featuring Jaymukh making everything from stewed lamb head (you can see the eyeballs intermingling with the chilies) to fast-food-style burgers (sandwiched between plain buns, layered with rubbery slices of American cheese). In just two years, according to Arumugam, his channel, Village Food Factory, has attracted close to two million YouTube subscribers and has earned the family more than seven million rupees, or close to a hundred thousand dollars, in advertising revenue—a small fortune in India.

Like the other addictive food videos—of disembodied hands making a rainbow layer cake, say, or a complete stranger in South Korea eating dinner alone (a genre known as mukbang)—the videos on Village Food Factory have their own formula for viral appeal, built on Jaymukh’s quiet, matter-of-fact way of preparing large quantities of food with the scantest equipment. Jaymukh hacks down shrubs with a machete to make space for himself to cook, and lugs huge branches from nearby trees to build his fires. He makes homemade coconut oil by methodically cracking open a hundred coconuts, and scrambles hundreds of eggs in a kiddie-pool-size pot. In the channel’s most popular video, he drops two hundred pieces of chicken into a deep vat of oil for a K.F.C.-style preparation.

The videos have an unpolished, homespun feel: Arumugam’s shots are unsteady, the cuts are abrupt, and the dominant sound is often the wind. People wander in and out of the frame, and there is little attempt made to manicure the food to make it look more appetizing. One video begins by showing a gaggle of noisy ducks—then it quickly cuts away while Jaymukh slaughters them. When the animals come back onscreen, Jaymukh is prepping the carcasses for a spicy stew; by the final shot, he is devouring an enormous leg. (Arumugam said that leftover food is donated to local ashrams.)

With Village Food Factory releasing a new video every three to four days, the project has become a family affair: Arumugam’s mother as well as his wife, Pragathi, prep the ingredients, and his younger brother, Manikandan, assists with cooking (and can often be seen in the videos helping himself to the food). The most unexpected part for Arumugam has been watching his dad become a celebrity. “I love this man like he’s my own father!” one fan wrote in the comments on YouTube. “He deserves a Michelin star for this,” another proclaimed. During a recent trip to Kerala, in South India (the furthest that Arumugam or his father has travelled), “people would surround us and ask for selfies with my dad,” Arumugam said. About sixty per cent of the videos’ viewers, he said, are outside India, mostly in the United States, the U.K., and Canada. One Canadian woman sent a letter asking for an autographed picture of Jaymukh; her late husband, Arumugam said, “used to sit and watch the videos on his desktop for hours on end.”

Most significantly, Village Food Factory has completely transformed the Gopinath family’s livelihood. They once struggled to scrape together five hundred rupees (about seven dollars), the minimum amount required by the local bank to open a checking account. With their new revenue, they have gone from renting a hundred-and-sixty-square-foot apartment to buying a seventeen-hundred-square-foot house. Arumugam was also able to purchase a car and a large-screen TV. “Our life has gone from black and white to color,” he said. As for Jaymukh—who speaks mostly Tamil but was able to talk to me via our limited Hindi—he is characteristically nonchalant about his new calling: “I’m glad this has given my son something to do.”

US National Debt Skyrockets to Levels Unseen Since WWII Amid COVID-19...