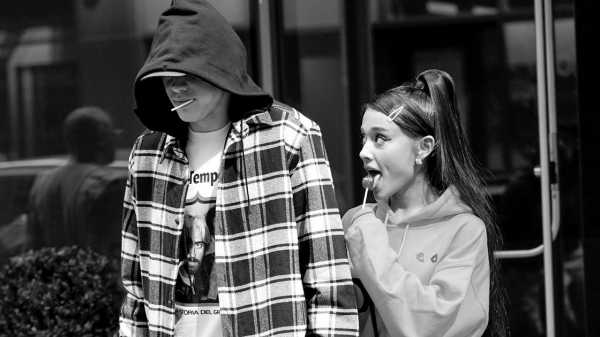 The first sign that a new wave of celebrity matrimony was upon us came in late February, when the actress and model Emily Ratajkowski announced to her 18.4 million Instagram followers that she had got married, in a quickie City Hall wedding, to her boyfriend of mere weeks, the independent-film producer Sebastian Bear-McClard. On Instagram’s Stories feature, Ratajkowski posed in a seventies-style mustard-colored Zara pantsuit and a black wide-brimmed hat, alongside her new husband, a few select friends, and a concerned-looking pug. “Soooo I have a surprise,” she wrote. “I got married today.”

Next, in June, the singer Ariana Grande and the comedian Pete Davidson announced their engagement, only a month after being spotted together for the first time. Since then, they have declared their love multiple times on social media and got matching tattoos of a favorite acronym, H2GKMO (“Honest to God Knock Me Out). Grande tweeted a compliment about Davidson’s penis (prompting many online to venture that the comedian’s casual swagger might be understood as “big-dick energy,” or B.D.E., a supposition that quickly became a meme; Grande’s original tweet has since been deleted), and Davidson went on Jimmy Fallon and asserted that being engaged to Grande made him feel like he “won a contest. So sick. It’s fucking lit, Jimmy.”

On Monday, Grande, too, suggested in a tweet (also since deleted) that “love is lit,” in response to yet another engagement: the musician Justin Bieber was rumored to have proposed to his girlfriend of a month, the model Hailey Baldwin, on a Bahamian holiday. In an Instagram post, Bieber confirmed the news, posting an impassioned message to his betrothed. “Listen plain and simple Hailey I am soooo in love with everything about you!” he wrote. “Gods timing really is literally perfect, we got engaged on the seventh day of the seventh month, the number seven is the number of spiritual perfection, it’s true GOOGLE IT!” 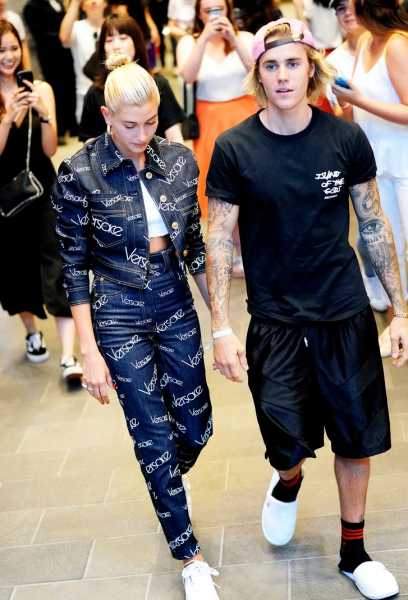 Justin Bieber and Hailey Baldwin, in New York, earlier this month. The couple recently got engaged after dating for just a month.

It would be easy to discount these extremely public, extremely quick engagements as the frivolous choices of the very young. (Ratajkowski is the oldest celebrity of the group, at twenty-seven, while Baldwin is the youngest, at twenty-two.) And yet they captivate our attention, seducing and taunting us with visions of heightened sexual and romantic congress, the likes of which none of us civilians have surely ever experienced. Like celebrity itself, these unions arouse both derision and jealousy: here we are, slogging along in our unremarkable lives and marriages, while these famous, gorgeous youngsters, with their ample resources, are rubbing our noses in their devil-may-care love-life decisions. How foolish they are! How lucky!

Unlike the fast couplings of years past—Cher and Gregg Allman, Tommy Lee and Pamela Anderson, Mariah Carey and Nick Cannon (now all divorced)—the recent series of flash affiancing, observed by vast social-media followings, seems to operate according to the corporate principles of the age. Is the Grande and Davidson union so different from the alliance, last year, between Supreme and Louis Vuitton? Just as the luxury giant gained edge from its association with the streetwear brand, which, in turn, was newly elevated to realms of high fashion (the collection included a stately wood trunk dyed Supreme red, and slobby hoodies bearing the LV logo), so did Grande, with her anime-character high ponytail and saucer-like eyes, gain grit and heft from her association with the hulking comedian, while the lesser-known Davidson was instantly introduced to a new, more mainstream audience. And, as with learning of a new album drop from Beyoncé and Jay-Z, or a surprise Fenty Beauty pop-up store, the moment that one is greeted with the gift of Bieber and Baldwin’s new engagement provides a kind of pleasurable shock, a deus ex machina of the news.

There is something American Dream-y about the “surprise!” model: the fantasy of the shiny and new, either avoiding or concealing the process behind the result. But what would such a process even look like in the case of these couples who have clearly bypassed the more mundane, and perhaps comforting, aspects of domesticity? Their attempts to hit the traditional relationship markers—a bit of normal-people cosplay—can seem almost touching: Bieber asking Stephen Baldwin, Hailey’s father, for his daughter’s hand in marriage; Grande sharing the news of her move-in day with Davidson by posting, on Instagram Stories, an image of a smiling Spongebob Squarepants and the words, “Us in our new apartment with no furniture 1 speaker and red vines.” Paradoxically, the public nature of these engagement announcements often makes the private emotions and confusions that are revealed in them seem even more poignant. Bieber began his Instagram announcement by writing to his mind-boggling hundred and one million followers, “Was gonna wait a while to say anything but word travels fast,” before easing seamlessly into addressing Baldwin herself, open and hopeful, and yet strangely formal, using her full name, as if to avoid confusion: “You are the love of my life Hailey Baldwin.” Then he added, as if he, too, were almost befuddled by his new status, “It’s funny because now with you everything seems to make sense!” I believe him.

A former spy explains why Manafort is crucial to Mueller’s Russia...

Iran Was Prepared for Full-Fledged War with US When Missile Downed...

Comfort dogs in court do opposite for some defenders, judges