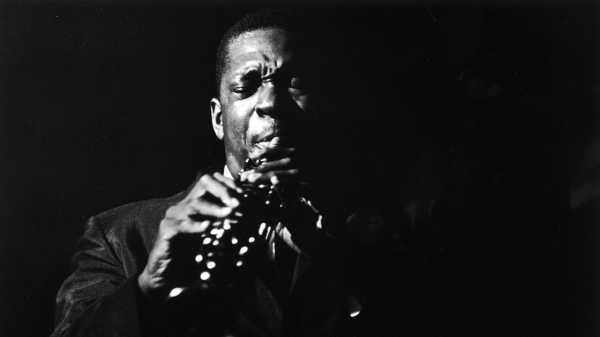 On March 6, 1963, the saxophonist John Coltrane, the bassist Jimmy Garrison, the drummer Elvin Jones, and the pianist McCoy Tyner—the same crew responsible for some of the world’s most plainly transcendent jazz records—gathered at the Van Gelder Studio, in Englewood Cliffs, New Jersey. Coltrane was thirty-six years old, under contract with the young imprint Impulse!, and in the midst of an electric run of shows at Birdland, a club on West Fifty-second Street. He lived with his wife, Naima, and her six-year-old daughter in a small brick house in St. Albans, Queens, but it’s difficult to explain precisely where he existed back then, in the spiritual sense—the signal he was channeling. In the liner notes to “Both Directions at Once: The Lost Album,” the historian Ashley Kahn describes the quartet’s work from this era as “injecting the ecstatic message of the black church into the polite world of jazz: Sunday morning on a Saturday night.” That precise tension—rhapsodic devotion versus a kind of measured elegance—is present, in one form or another, in nearly every great work of American art. In the spring of 1963, Coltrane was fully seized by it.

When the studio engineer Rudy Van Gelder gave Coltrane a mono tape of the music the quartet had recorded that day, Coltrane handed it off to Naima. (Did he relisten to the tape himself? No one can say for sure.) Impulse! eventually relocated to Los Angeles, and the master tapes of the session were placed in a storage facility. Then, in the nineteen-seventies, in an effort to cut down on fees, they were unceremoniously tossed, along with every other unissued tape in the label’s archive. Coltrane himself didn’t make it out of the sixties; he died, in 1967, of liver cancer. He and Naima split up a few months after the session at Van Gelder; she died in 1996, of a heart attack. The new songs were never slotted for release in 1963, for reasons that remain somewhat mysterious—maybe Coltrane didn’t think of them as a record. Maybe he wanted to wait.

This past June, fifty-five years later, the session was released commercially—Naima’s family had found the tape, and finally decided to put it out. (Her estate worked closely with Coltrane’s son Ravi, who co-produced the record with Ken Druker.) The title, “Both Directions at Once,” could, of course, allude to any number of things—the sacred versus profane binary that Kahn nods to in his notes, the challenge of trying to recreate the experience of a live performance while pent up in a recording studio, the bridging of jazz’s traditional past with a more delirious and experimental future. The official word is that it comes from something Coltrane once said to the saxophonist Wayne Shorter, “about starting a sentence in the middle, and then going to the beginning and the end of it at the same time . . . both directions at once.” Kahn suggests that language was always the “go-to metaphor” for the great improvisers of Coltrane’s generation—it was the way they spoke about and analyzed their work. (Shorter has also said that he and Coltrane would occasionally slam out clusters of notes on the piano, and Coltrane would say, “See if you can find a story in there!”)

What a beautiful and freeing idea—to “begin anywhere,” as the composer John Cage once said, and explode your way out. “Both Directions at Once,” which features seven tracks on the single-disk edition, and fourteen on the deluxe edition, was hungrily received by Coltrane’s devoted public. Sonny Rollins described it as “like finding a new room in the Great Pyramid.” I first heard about the release on Twitter, when the wonderful jazz writer Nate Chinen posted a link to a Times story. It was an otherwise unremarkable Thursday afternoon, made miraculous. A lost album! By John Coltrane! All summer, the headlines had been getting people down. Life felt ugly and difficult: children were being held in cages, young and beloved figures were committing suicide, and so on. New music from a true American visionary—who was, by all accounts, also a gentle, elegant, and searching man—gave us a sudden flash of hope. Something pure in a rotten world! When my LP arrived in the mail, I unfolded the liner notes, spread them out on my apartment floor, lit a candle, and took a breath before dropping the needle. It felt like a kind of séance.

“Both Directions at Once” is subtitled “The Lost Album,” which is maybe a bit of a fiction. (It’s unclear whether it was ever an “album,” exactly, or just how lost it was.) The classification itself is intoxicating, though: lost albums, particularly from singular artists, suggest that profound beauty might be lurking in the back of every overstuffed coat closet in America. I can’t think of an idea more instantly engrossing than “You’ve just got to find it.” For decades, classic-rock fans have been hyperventilating over lost records by artists like Neil Young (in 1975, as his marriage to the actress Carrie Snodgress began to deteriorate, Young recorded a batch of heartbroken, confessional songs for an album to be called “Homegrown,” then later scrapped it all because it was gloomy and “too personal”) and Jimi Hendrix (in 1970, he recorded a sixteen-song suite on an acoustic guitar—he called it “Black Gold”—and handed the tapes off to the drummer Mitch Mitchell, who then forgot about them for several decades), among others. The Beach Boys’s original “SMiLE,” the electric version of Bruce Springsteen’s “Nebraska,” the entire contents of Prince’s vault at Paisley Park—what can they offer us?

As my colleague Richard Brody suggests in his excellent review of the new Coltrane release, studio recordings can sometimes defang great jazz: “The new release of ‘Both Directions at Once’ has both the odd virtue and the essential disadvantage of domesticating, in the literal sense, these musical ecstasies,” he writes. But holding the record is nonetheless a thrill. It’s easy to see why lost albums can feel like potentially sacred totems—the proverbial missing puzzle piece in our scramble to feel whole. It’s also tempting, in tumultuous times, to look backward for clues left behind by our predecessors, for anything that might help us charge into an uncertain future. “Both Directions at Once” contains two previously unheard original compositions (“Untitled Original 11383” and “Untitled Original 11386”). I’ve been listening to both tracks more or less constantly since I acquired the record; I’m still trying to comprehend and unpack their lessons. It is preposterous to think of these songs as transmissions from another plane—Coltrane, after all, was just a regular, flesh-and-blood dude when he made them—but this summer, especially, I am grateful for their weird magic. Coltrane appreciated the ballads of the past as much as the free jazz of the future; he was simultaneously reverential and questing. But he also liked making up his own way of doing things. His best songs contain elements of all three approaches. The chord substitutions that he made while improvising later came to be known as “Coltrane changes.” They suggest, like the arrival of this album, that there are still very good surprises to be had, if we keep our hearts open.

Rescue Chopper With 7 People Aboard Crashes in Mountains in South...

How Trump could use a national emergency to get his border...