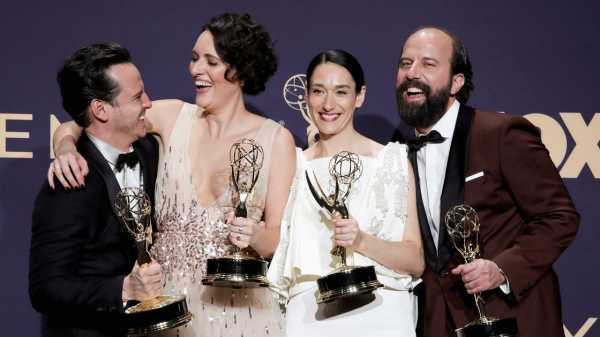 The Seventy-first Primetime Emmy Awards had no host—no comedian to shove the show along with backslaps of gab—and therefore it had no narrative center. As was the case with the most recent, hostless Oscars, this was not a bad thing. The broadcast flowed at a brisk place, which contrasted nicely with the loose energy and spiky passion of the most memorable acceptance speeches. These Emmys were uneven and unsettled, and thus unusually interesting by the standards of this telecast. It was the text of a medium in flux.

“Fleabag,” Phoebe Waller-Bridge’s screwball dirge on sex and death, won four awards, including Outstanding Comedy Series. Since “Fleabag” streams in the U.S. on Amazon Prime Video, its success at the Emmys signalled the decentralization and fragmentation of the television audience circa 2019; it was also the broadcast’s most prominent sign that American television has evolved into an Anglo-American phenomenon. “Quite a lot of British winners,” Jesse Armstrong said, when accepting his trophy for writing “Succession”; that lot included “Chernobyl,” “Black Mirror,” “A Very British Scandal,” and “Killing Eve.” The speeches showcased many different styles of British chuffedness, from self-deprecating muttering to gobsmacked glee.

Network television was represented foremost by the ninety-year-old Bob Newhart (who dusted off his deadpan mordancy in a bit that joked about his dotage) and by two victories for “Saturday Night Live.” (Lorne Michaels kept up his cold professionalism even when he paid tribute to Chris Farley.) The show seemed to confirm that network TV is now relevant mostly for its fossilized history and its pluralistic future. To put it in red-carpet terms, the honored network past was the porkpie hat worn by the presenter Norman Lear and the hopeful network future was the pair of gleaming sneakers worn by the presenter Viola Davis. Also, the red carpet was purple.

The cultural and creative diversity of the cable networks glittered nicely, with big awards going to tiny hits (“Ozark”) and to HBO’s significant reflections on scandal and strife in the nineteen-eighties (“Chernobyl,” “When They See Us”). But, at big moments, it felt as though the big tent of television was getting folded up, as first the cast of “Game of Thrones” and then the cast of “Veep” assembled onstage to receive ovations for their expired hit shows, as if receiving a Viking funeral. An odd piece, modelled on an “In Memoriam” segment, shed a tear for “additional shows that said goodbye this past season.” The recent history of TV—the audience’s feeling for old crushes and enduring faves—filled up the show’s empty center.

Obviously, the Emmys cannot just have a show without a host. The hostlessness must become a motif, to be mocked and teased in postmodern fashion. Presenters and personalities chewed the matter over ad absurdum. Thomas Lennon took the thankless job of delivering goofy wisecracks as winners approached the stage and also at interstitial moments. (At one point—was it a joke or was it a “joke”?—Lennon seemed to crack under the strain: “This is why people don’t do this. ’Cause it sucks.”) When the voice of Amazon’s Alexa read the nominees in one category, the joke proved eerie and corny at once; an artificial intelligence had been ordered to deliver our yuks. In the opening bit, Homer Simpson fell through the stage, which caused Anthony Anderson, of ABC’s “black-ish,” to scurry around the theatre in search of a replacement host. Anderson landed, for the sake of the gag, on Bryan Cranston. “Television has never been this damn good,” Cranston said. He was speaking in his capacity as senior statesman of prestige Peak TV.

There was a touch of anxiety in that “damn,” I think, as well as in Michael Douglas being chosen to close the show. (He handed the award for Outstanding Drama Series to “Game of Thrones.”) Although Douglas is Hollywood royalty and a bona-fide movie star—and although he currently stars in “The Kominsky Method,” on Netflix—he could only be considered a proper ambassador for the medium of TV by an academy uncertain of that medium’s stability and seeking the ballast of old-fashioned stardust.

Detroit, Then and Now |

Patricia Arquette Succumbs to a Pipe Dream of Flight in “Escape...