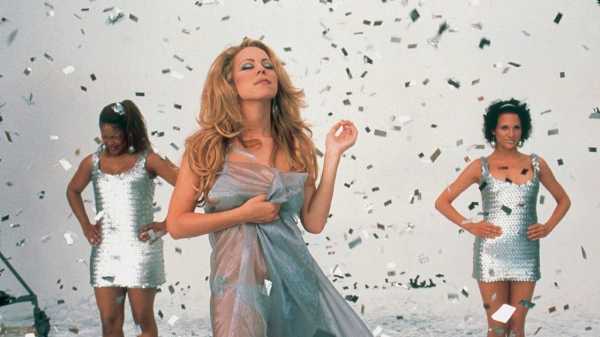 Mariah Carey’s voice is a familiar presence around the holidays: “All I Want for Christmas Is You,” a song that she wrote with Walter Afanasieff, in 1994, is one of the best-selling singles of all time. And just last week, Carey soared to the top of the iTunes album charts, though not because of her festive song, nor her newest album, the trap-imbued “Caution,” which was released on November 16th. Instead, Carey’s “Glitter,” the soundtrack from a movie about a fictional up-and-coming vocalist in the nineteen-eighties named Billie Frank (played by Carey), ascended the charts—nearly two decades after the movie flopped at the box office.

The feat was the handiwork of Carey’s fervent fan base, dubbed the Lambily. (Carey is known to address her fans, as well as the people close to her, as “lambs.”) In the lead-up to the release of “Caution,” the Lambily mobilized a preëxisting social-media movement called #JusticeForGlitter. The hashtag started years ago, in response to Carey’s refusal to perform any of the soundtrack’s cuts in concert, but has since blossomed into a reconsideration of the historically maligned album. Fans gushed about favorite “Glitter” tracks, unearthed clips from the movie featuring Carey throwing down verbal and vocal gauntlets, and urged listeners to purchase a digital copy of the soundtrack.

Fuelled by endorsements from Carey and Padma Lakshmi, who also starred in the movie, and a Change.org petition demanding that streaming services finally offer it, the album reached No. 1 on iTunes and reëmerged on several Billboard charts. The soundtrack achieved an improbable ten-thousand-per-cent increase in sales—driven almost entirely by digital-album downloads. The “Glitter” campaign has done more than exhume a notorious dud, however: it has provided a moment to pause and reëvaluate how we listen to music in the streaming era.

New Yorker writers reflect on their favorite works of art.

In the early two-thousands, Carey had established herself as a cross-generational and practically peerless talent—a vocalist possessing hair-raising range and a facility for penning heartrending melodies. Carey’s self-titled début, in 1990, was an immediate hit, and she continued her ascent from there, landing a No. 1 hit every year through 2000. As one of the biggest stars in the pop firmament, she inked one of the largest recording contracts in history: a four-album, eighty-million-dollar deal with Virgin, in 2001. The first of those albums, the “Glitter” soundtrack, fell far short of her previous sales figures. It soured Carey’s relationship with the label and was among her biggest commercial and critical failures.

For many “Glitter” acolytes, two tragedies of circumstance doomed both the soundtrack and the film. The first was Carey’s personal troubles: during the “Glitter” promotional run, she was briefly hospitalized for exhaustion. The second was the fact that the soundtrack was released on September 11, 2001. That date had been one of the music industry’s “Super Tuesdays,” a handful of days a year when labels dropped hot-ticket albums simultaneously; Jay-Z’s “The Blueprint” also went on sale on 9/11. After the film’s short cinematic run, and the lacklustre critical response to the album, Carey tried to erase “Glitter” from existence, barely mentioning it in interviews and leaving the songs to gather dust.

Her fans didn’t let the songs disappear. Even Carey seems to be reassessing the album. She not only amplified the #JusticeForGlitter campaign but also suggested that songs from “Glitter” will make it onto her touring set list in the near future. “Since the Lambily got ‘Glitter’ to No. 1, they’ve lifted this huge burden of having to feel, like, ‘I can’t do stuff from “Glitter” cause nobody knows it, or whatever,’ ” she told Andy Cohen, on “Watch What Happens,” adding that she was “going to put together, perhaps, a medley.”

If you listen to “Glitter” again, it’s a perfectly serviceable Carey album: a balance of plucky ballads, such as “Never Too Far,” and radiant pop gems that are meant to be played joyously in the club and on the weary, early-morning cab ride home. One standout, the Rick James-produced “All My Life,” is an effervescent R. & B. number about being ready for love, complete with a ripping flute solo. “Love this album,” a fan wrote in an iTunes album review, back in 2015. “And i wish she’d love it too!” Critics initially turned against “Glitter” because of the way that Carey chose to represent the nineteen-eighties—the very decade during which she came up as a singer. The response in Q magazine was typical: “ ‘Glitter’ continues her slump from gifted to grievous via gratuitous power ballads, dismal disco/R&B and criminal covers of ‘80s classics.” The reasons why rejected music becomes newly palatable are never clear, but, given how densely packed the contemporary-pop sphere is with eighties-hewn rhythms, we shouldn’t be totally surprised that “Glitter” has found new life.

In 2001, the same year that “Glitter” failed to strike gold, the file-sharing service Napster shut down. Although the most visible peer-to-peer network had been extinguished, dozens more sprang up in its wake, making for an infinite game of digital whack-a-mole. File-sharing left craters in the music industry, as it killed off sales models and destroyed livelihoods. But it also made entire discographies and rarities suddenly accessible, albeit through illegal means, as listeners with Internet connections could receive transmissions from someone else’s computer halfway around the world. In time, the gulf between purchasing an eighteen-dollar CD at Sam Goody and downloading an album on Kazaa widened, which gave way to a strange dynamic: the sheer limitlessness of music available online combined with the increased convenience of outsourcing the decision-making process of what to listen to.

These days, streaming services dominate our phones and tailor playlists to emit an endless trail of music that we’ll probably enjoy. But the #JusticeForGlitter movement, by shining a spotlight on an album that seems underappreciated and merits a closer listen, has, for the moment, transformed passivity into a focussed passion. With fans sharing their Carey-listening-calendar schedules, breaking down favorite lyrics, and pushing back against the algorithm, #JusticeForGlitter is also, in a way, positively 2001.

The Passive Silhouettes of Women in Asian Soft-Core Magazines |