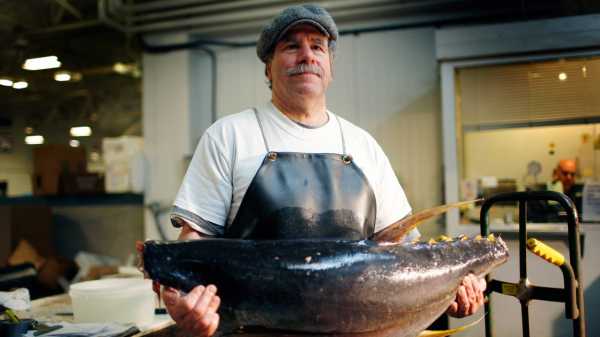 Fish: the final frontier in food delivery. At this point, you can get warm cookies, vodka, and locally grown rutabaga brought to your doorstep in minutes, but try getting a fresh red snapper. Until recently, if you could obtain the fish, it would likely have been pre-frozen and shipped in from overseas. (Such is the case with at least eighty-five per cent of the seafood consumed in this country, both from grocery stores and in restaurants.)

A new tech startup is aiming to remedy this situation. The company is based not in a Silicon Valley lab but inside the Fulton Fish Market, a two-hundred-year-old seafood wholesale market that was once situated in lower Manhattan and is now at Hunts Point, in the Bronx. It is the second-largest fish market in the world, after Tsukiji market, in Tokyo. Historically, it has served restaurants and retailers in the New York City area, operating at night so that chefs and fish-store owners can get there. The startup, called FultonFishMarket.com, allows customers in the rest of the country, both restaurants and individuals, to buy from the market, too, cutting out a chain of regional seafood dealers. The fish is shipped fresh, rather than frozen, thanks to an Amazon-esque warehousing-and-logistics system. Mike Spindler, the company’s C.E.O., said recently, “I can get a fish to Warren Buffett in Omaha, Nebraska, that’s as fresh as if he’d walked down to the pier and bought it that morning.”

There is one thing, however, that the sophisticated logistics system cannot do: pick out a fish. If Warren Buffett orders a red snapper, the company needs to insure that his fish is fresh, fairly priced, and actually an American red snapper—and not some other, day-old red fish that a vender is trying to pass off. (According the ocean-conservation organization Oceana, more than twenty per cent of the seafood in restaurants and grocery stores in America is misidentified.) For this task, the company has enlisted one of the old-timers: Robert DiGregorio, a forty-seven-year veteran of the business, known in the marketplace as Bobby Tuna. DiGregorio, sixty-eight, is the author of “Tuna Grading and Evaluation,” an industry standby. He possesses a blend of discernment and arcane fish knowledge that, so far, computers have yet to replicate. Over the years, he said recently, “I’ve bought and sold literally millions of pounds of fish.”

It was just after midnight, and we were standing in FultonFishMarket.com’s office, which has windows overlooking the selling floor of the brick-and-mortar market. The market—an enormous warehouse full of wriggling fish—was coming alive. Forklifts rumbled to and fro. Fishmongers were setting up stands around the perimeter, displaying their product in cardboard boxes filled with ice. The first wave of customers, Japanese fish dealers and buyers for fancy restaurants, trickled in, surveying the inventory and haggling over prices. “Except for the food-safety stuff, our business could be any market from the last three thousand years of human history,” Spindler told me, taking a seat in a conference room. His deputy, Cyndi Metallo, sat across the table from him, at a laptop. Both are veterans of the online-grocery business. (One of their previous projects was mywebgrocer.com.) When they arrived at the fish market, in 2014, people were wary. Metallo recalled, “We used to walk up and down the market, and the guys would be, like, ‘Hey, Web site!’ ”

“They thought selling fish on the Internet was ridiculous,” DiGregorio said, speaking for the fishmongers. “They didn’t see how it could possibly work.” Metallo and Spindler were dressed in fintech casual (loafers, fleeces). DeGregorio has a salt-and-pepper mustache and wore a tweed flat cap that brought to mind a London cab driver. Five years ago, “I didn’t know how to use a computer,” he said. But when the Web-site people arrived at the market he sensed an opportunity. Together, they’ve created a human-machine fish-buying operation. “Think of it as a power assist,” Spindler said. “It’s like power steering on your car.” The Fulton Fish Market moved from its South Street Seaport location to its current building, in the Bronx, in 2005.

By 1 a.m. each night, the company compiles orders from around the country and sends them to DiGregorio and a five-person team that he leads, who head into the market, carrying tablet computers. There are some twenty-five fish venders on the floor, and the company’s algorithms crunch data on their sources and past inventory. “Our system will tell Bobby, ‘We think you should get the tuna here,’ ” Spindler said. “He may get it there. Or he may find that the guy next door has better tuna.” The computer is a “learning system,” Spindler said. So if DiGregorio makes a choice it didn’t predict, it asks, “ ‘Was the fish not available? Was it damaged? Did you find something fresher elsewhere?’ All that information is fed back in for next time.”

I needed to buy some fish for dinner. After perusing FultonFishMarket.com, I ordered two pounds of “Fresh, Wild Yellowfin No. 1”—the company’s most expensive tuna option, mainly because of its high fat content ($36.95 per pound). DeGregorio agreed to show me his part of the selection process. “Let’s take a walk,” he said. We went down a flight of stairs and into the marketplace, where the air was freezing cold and extremely fishy. “It smells good,” DiGregorio said. “Smells like money.”

The first vender on the row was Mount Sinai Fish Inc.—a trusted purveyor of local fare. What can a fishmonger see that a computer can’t? DiGregorio pointed to the nearest box: flat, gray-brown skate, packed in ice. “I’m assessing a few things,” he said. First, touch. The fish should have a nice “film”—as in slime. “It’s actually an indication of freshness,” he said. “The film is very important for fish, because they live in the water, and it helps them to swim through it. It also protects them from bacteria and parasites.” Then, smell. He sniffed the air above the box. “Skate breaks down very quickly,” he said. “It’s in the shark family. And, when it goes bad, it smells like ammonia.” No ammonia scent. The scales were “nice and tight.” DiGregorio pronounced the skate fresh.

He turned to a box of dogfish, which looked like a cross between a shark and a Weiner-dog. “This was the original fish and chips in England,” he said, picking up a specimen. Its head had been cut off. “It still has blood on it!” he said, happily. “That’s a fresh fish.” It was firm, too. “You could play baseball with this fish.” He pointed out a box of bluefish at another stand: “Now, these blues? Not so great. They look a little mushada to me . . . . A little soft.”

DiGregorio first came to the market in 1972. He was twenty-one and had just left the Marine Corps. “I was kind of lost,” he recalled. A family friend brought him to the old location, at the South Street Seaport. “It was a real, working waterfront,” DiGregorio said. “There were still boats coming in. Saloons on every corner. I got out of the truck and I looked around: men, fish, boats, fights, drinks. I said, ‘I’m staying!’ ” (The market moved to its current building, in the Bronx, in 2005, losing some of its romance. “Had they brought me here, I might have said, ‘Maybe not.’ It’s like a big Costco or something.”)

He worked as a “lumper,” bringing boxes of fish from the boats, then as a journeyman, wheeling them to the loading zones, then as a skinner, a cutter, a salesman, and, finally, a buyer. During the sushi boom of the nineteen-eighties, he began specializing in tuna. He got to know the old-timers: Frankie Legs, Mikey Yak, Johnny Clams. John Cioffi, the foreman at Smitty’s Filet House, became a mentor. “Johnny Dirtyface,” DiGregorio said. “That’s what they used to call him. Great, great fisherman.” DiGregorio’s twin brother, Ronald, entered the business at the same time. He recently retired, after forty-five years as a salesman. “They called him Ronnie Cigars.”

At a stand called Universal, DiGregorio greeted a large salesman named Junior Grippa. “Junior’s been in this business since he was six,” he said.

“Not as long as him, but I look better than him,” Grippa said.

“Everybody looks better than me,” DiGregorio said. Then he called out to another buyer: “Good morning, Uncle Dennis!”

“Getting better,” DiGregorio, who recently tore an Achilles tendon, said. He explained to me that Uncle Dennis was not really his uncle. “I’ve known his family a long time.”

This wasn’t idle chitchat. To get the best out of fishmongers, DiGregorio said, “they have to have a relationship with you. To trust you. Then you’re going to get the best stuff—not the stuff they think they can get by with.” He added, “How’s a robot supposed to be able to do that?”

There were jokes about DiGregorio’s new line of work. At a stand called JMS, a salesman named Joe Zimmardi called out, “Bobby!” He marvelled at the computer-driven buying system. “I’m an old-school guy,” he said. “Don’t even give me one of those iPads to try and operate. I don’t know how they got Bobby educated to do it.”

A salesman with “Halibut Joe” embroidered on his jacket teased DiGregorio about working in tech: “I was thinking he could work from home!”

Around 3 A.M., having made his way around the market, DiGregorio arrived at a stand called Blue Ribbon. He exchanged fist bumps with a worker named Warren Kremin, who was slicing up a long, red loin of tuna. “That’s my nephew, Warren,” he told me. After surveying the loin, DiGregorio determined that this would be my fish. (He was working without the aid of FultonFishMarket.com’s vender-recommendation software, although, he said, “It’s very useful. It saves a lot of time.”) “Warren, I need a two-pound piece of No. 1.”

“With a little bit of fat?” Kremin asked, wielding his knife.

DiGregorio nodded. Kremin wrapped my piece of tuna in paper and placed it in a plastic tote. DiGregorio took the bag and headed for FultonFishMarket.com’s receiving station, where the fish would be scanned, weighed, temped, assigned a bar code, and Cryovac-sealed. “You can see why, when I first got out of that truck, forty-seven years ago, I fell in love with this place,” he said. “Even though it’s changed a lot. Just the camaraderie. The specialness of it, if that’s a word. I don’t know if I’ll ever retire.”

What about the fact that Spindler’s computer is a learning system? Does he ever worry about being replaced? DiGregorio shrugged. “By the time they invent a computer that can do what I can do,” he said, ”I’ll be dead.”

The Note: The new national normal

Why the Life-Insurance Industry Wants to Creep on Your Instagram |

Ex-UK Prime Minister Theresa May Ridiculed on Twitter Over Her ‘We’ve...