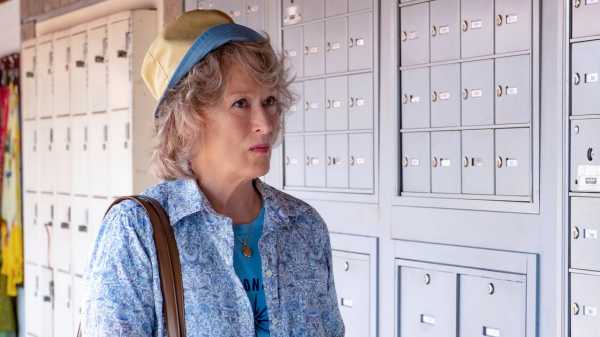 With his new film, “The Laundromat” (which opens in theatres on Friday and comes to Netflix on October 18th), Steven Soderbergh has made one of the most ambitious popular-styled films to have surfaced in a while. Even if several of his strategies are more interesting than their realization onscreen, the effort itself is immensely stimulating, and the aspects of the film that do achieve their goals are nothing short of thrilling. The movie, based on a true story, involves illegal money laundering and legal tax avoidance by way of shell companies; its mainspring is the Panama Papers leak of 2016, which traced tens of thousands of shell companies to a single law firm in Panama City, Mossack Fonseca. Soderbergh’s wildly imaginative approach to the subject is to dramatize a wide variety of characters in a disparate array of story lines that are connected indirectly through that firm’s operations. Through this approach he wrangles with the very stuff of commercial cinema, the very concept and nature of a story, and tries to expand on it and to transform it. His reason for doing so is both profound and appropriate: it’s political. Soderbergh is attempting to get at phenomena—of financial power and abuse, as well as of the grand-scale greed and petty venality, the brazen deceit and endemic indifference on which they run—that exist as a sort of deep yet ubiquitous undercurrent of modern life.

Let’s get the problems out of the way: Soderbergh casts Gary Oldman as Jürgen Mossack and Antonio Banderas as Ramón Fonseca, who begin the film and return throughout it as into-the-camera narrators in fantasy situations, and their monologues and dialogues furnish the film with its connective tissue. Those two characters start things off, in the presence of cavemen struggling to light a fire, by lecturing viewers on the birth of money from barter, and then—in a single gliding shot—pass from a bare plain to a tunnel to a sunken blue night club where their lecture veers toward the birth of credit and its premise of trust. These connective passages, running throughout the film, are reminiscent of Adam McKay’s “The Big Short,” with the filmmaker as village explainer clarifying complex financial concepts for lay viewers, and Martin Scorsese’s “The Wolf of Wall Street,” with self-justifying financial miscreants turning their schemes into shameless and gaudy adventures.

McKay’s film is feeble because it turns his lecturers into mere instruments to display and dispense his knowledge; Scorsese’s is mighty because it uses the protagonist’s passions to challenge the audience to face their own dreams and desires. Soderbergh’s version falls in between the two: the lawyers’ narrations offer up tidbits of their personal stories and suggest a complex web of private motives and public circumstances for their shifty daily dealings. But only barely. For the most part, the duo becomes the repository for anything that Soderbergh, working with the screenwriter Scott Z. Burns, wants to say in the way of background and history regarding the business and politics of shell companies and tax avoidance. The fantasy settings of their to-the-camera addresses involve multiple levels of frame-breakings (including a visit to a movie studio and its sound stages), suggesting Soderbergh’s desire to come out from behind the curtain and make a speech.

Forget about them; edit them out. Their speeches are not only inadequate and superfluous, they’re easily detachable, standing clearly apart from the fabric of the rest of the film; without them, “The Laundromat” remains boldly imaginative and whirlingly energetic, with a comedic tone of bewildered absurdity that matches the movie’s main ideas. The central story involves Ellen Martin (Meryl Streep), a Michigan woman passing from middle age to her elder years, a grandmother who’s visiting Lake George, New York, with her husband, Joe (James Cromwell), and a tour group from their home town. They’re riding in a tour boat when it capsizes; Joe drowns, along with twenty others from the group, and, back home, Ellen is advised by her attorney to seek a settlement with the boat operators’ insurance company. But the very identity of that company proves hard to verify—not just for Ellen but for the operators themselves (Robert Patrick and David Schwimmer), who suddenly fear that the unexpectedly dubious status of their insurance may put them personally on the hook for the accident.

Streep is not onscreen long enough, but she nonetheless dominates the film with an exquisitely calibrated performance that’s in keeping with the hearty and refined emotionalism of Soderbergh’s direction. In her wistful and hearty, folksy and candid reminiscences of Joe, Ellen evokes the intimate richness of shared lives and the complexity of a long and happy marriage. At the same time, she draws on a great fund of energy, enthusiasm, knowledge, practical insight, and keenly focussed indignation to drive her into useful action when her insurance claim falls into a void. Her pursuit leads her to the island of Nevis, a tax haven, where she seeks a businessman named Irvin Boncamper (Jeffrey Wright), whose office, where he plays lots of computer solitaire, also turns out to be a shell (a word that Streep gives a good comedic workout) for another series of shells, both professional and personal.

The episodic film moves, briefly but uproariously, to Miami; poignantly and outrageously, to Las Vegas, where Joe and Ellen met and where she’s hoping to take an apartment for sentimental reasons (Ellen’s real-estate broker is played by Sharon Stone); to the office of a local newspaper, where Ellen tries and fails to blow the lid off what strikes her as an unreported scam; to Los Angeles, where a family of fabulously wealthy Africans whose home country is unidentified (a plutocrat, played by Nonso Anozie, his wife, played by Nikki Amuka-Bird, their college-student daughter, played by Jessica Allain, and her roommate, played by Miracle Washington) get caught up in the shell game; and to Sinaloa, where a drug cartel that uses shell companies does its dirty deeds. In the movie’s boldest sequence, the action lands in China, where a British accountant (Matthias Schoenaerts) is setting up a company for a politician’s wife (Rosalind Chao). The crisscrossing lines of corruption there include judicial power and extrajudicial power of a monstrous sort that, even now, is in the news, yielding a sequence of physical horror that blends Luis Buñuel’s “The Andalusian Dog” with Soderbergh’s own “The Knick.”

What emerges is a view of corruption so total and endemic that it poisons the ostensible fight against corruption—and empties out the stuff and substance of society at large, even in a practical and material sense. Soderbergh displays the physical effects of tax avoidance in a sequence of a dazzling, Rube Goldberg-esque contrivance that’s too good to spoil. It’s a violent scene, involving the senseless yet ironic death of a participant in one of the movie’s central schemes, and it traces that death full circle from an infrastructure that’s been neglected owing to inadequate public funding. The scene is both wondrous and absurd, comedic and tragic, and it looks at life at large both from close up and from afar—an outlandish yarn that nonetheless ends with a moral shock.

Soderbergh’s film is haunted by current-day politics—even more by what it never makes explicit than by its express references to the excess power of wealth in electoral campaigns. The underlying thread of “The Laundromat” isn’t the personalities and self-justifications of Mossack and Fonseca; it’s the very sense of a complex system that has become both immoral and irrational, in which the threads of control and connection have been cut, in which the notion of corporate identity and personal responsibility have been replaced by a shell game of such outrageous greed and egregious deceit that it provokes modest people to overturn the tables in anger and despair.

Ryan Zinke spent his first year in office selling off our...