Home Culture The Leafy Love Affair Between Millennials and Our Houseplants | 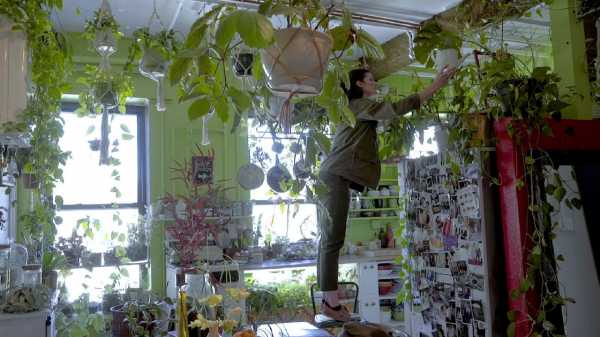 Summer Rayne Oakes understands why so many millennials have developed houseplant fever.

Until very recently, I went about my days with a moderate case of “plant blindness”—a term coined, in 1998, by the botanists James Wandersee and Elisabeth Schussler, to describe the widespread non-noticing of plants in one’s environment and the ranking of plants as inferior to animals (and not, they note, the way it was sometimes used by British horticulturalists, to describe plants losing their terminal buds and going “blind” themselves). It wasn’t that I didn’t like the world of flora: like many a workaholic New Yorker, I craved nature and purchased bodega flowers on impulse and treated myself to botanical-garden visits every spring. But trying to learn about plants and trees—what they were called, what they were like, or how humans could help them flourish—always felt, for me, like trying to learn the rules of football: a task that my brain would reject after about thirty seconds, no matter how much I enjoyed being amidst greenery, no matter the fact that I’d grown up in Texas attending hundreds of Friday-night games. “What a nice plant,” I would say, sitting in a friend’s apartment, staring at a leafy thing wearing terra-cotta, which would live in my memory as an indistinguishable green blur.

And then, about a month and a half ago, I emerged from a late-winter whirlpool of generic millennial-era anxieties about climate change and capitalism, and I found, to my great surprise, that I had become a new person—one who could think about nothing else but plants. Suddenly, I noticed ferns and succulents everywhere, as if they were babies in strollers and I was trying to conceive. I started gazing with uncontrollable longing into apartment windows, storefronts, restaurants, yoga studios, dreaming about snatching up every beautiful plant within and hoarding them in my now barren-seeming home. I began peppering all my plant-loving friends with questions: Which houseplants might survive being cared for by a botanical ignoramus? What was a philodendron? Since plants can’t cry or wag their tails or angrily drag their water bowls around the floor, how did you know when they felt happy or thirsty or sad?

Within a few weeks, I had inched into the periphery of a large and growing cohort of young plant obsessives, the most eminent of which are respected plant professionals, like the thirty-four-year-old Summer Rayne Oakes, an activist and model—“Yes, that is my real name,” she clarifies, on her Web site—who holds degrees in environmental science and entomology from Cornell. Oakes wouldn’t necessarily have chosen the term “plantfluencer” for herself, she says, in the “Annals of Obsession” video above, though she does have more than eighty-two thousand subscribers at her plant-care YouTube channel, called Plant One on Me. (She also has more than a thousand plants in her Brooklyn apartment.) But she understands why so many millennials have developed houseplant fever. “It’s this wonderful hobby that we have somewhat of control over, especially because we don’t have backyards or places to call our own, really,” she says. Plants, of course, also look amazing in YouTube videos and Instagram photos: within the vast, lush, carefully styled digital ecosystem that’s interlinked by hashtags like #plantparenthood and #plantsmakepeoplehappy, thousands of people my age engage in the era-defining activity of translating our most personal passions and coping mechanisms into quantifiable digital engagement.

For my part, I haven’t yet delved into Instagram plant world—my hobby is so new and my plant-longing so fierce that I don’t want to exacerbate or destabilize it (or further inflate my credit-card statements) with seductive visions of enormous monstera leaves stretching toward the light. But there’s something mesmerizing about this chronicle of “plant parents,” in which you’ll see a string of lovely, cheerful millennial plant-owners attempt to bring a spirit of slow caregiving to the digital systems that make us sad and twitchy enough to crave this very spirit—ideally in a form that can be contained in a nice ceramic pot.

“Honey,” Reviewed: Robyn Has Returned, and She Has What You Want...

A Documentary Captures the Dreams and Anxieties of Affluent Chinese Teens...

Brook vs Rabchenko: All the talking points from Sheffield