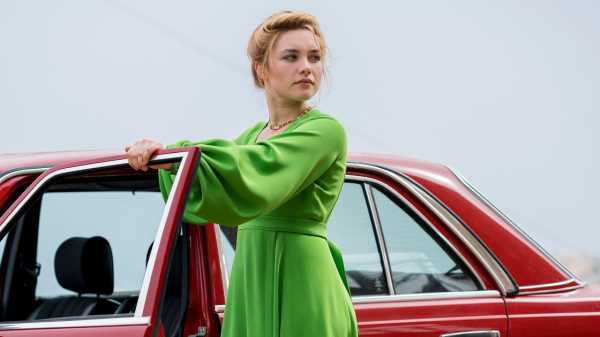 In “The Little Drummer Girl” (AMC), a six-hour miniseries directed by Park Chan-wook, Florence Pugh gives a performance about performing, in a John le Carré adaptation that approaches spy craft as a form of experimental art. Pugh plays Charlie Ross, a young British actor devoted to arty theatre and dabbling in leftist politics. This spirited bohemian comes to the attention of the Israeli intelligence service, which believes that her thespian talents and actorly thirst for approval, combined with her naïve sympathies for anti-imperialist radicals, will make her an ideal double agent.

Set in the late nineteen-seventies, the show shuttles through England and Lebanon, and across continental Europe. On the beach, in Greece, Charlie submits to the laconic charms of her handler (Alexander Skarsgård), who is named Gadi Becker but goes by many an alias in the course of luring her in and shaping her up as an artist of deception in her own right. The instability of identities contributes to her dizziness, which the viewer comes to share. “The Little Drummer Girl” is subtly nutty: a geopolitical thriller distilled to an exercise in psychological suspense. Its tension relies on Charlie’s swerves between fragility and bravado as she operates in a climate of mistrust and interfaces with people for whom paranoia is a job skill. Pugh conveys a disequilibrium that makes all the moments of glamorized espionage—nerve-rattling border crossings, surveillance-van stakeouts, cryptographic mysteries—seem like fragments of a fever dream.

Gadi coaches Charlie to pretend that she was the lover and accomplice of a Palestinian terrorist whose outfit has been detonating bombs in the service of an anti-Zionist agenda. It’s a set-up for her infiltration of the group, so that the Israelis, aided by international allies, can thwart further attacks and bring her purported lover’s family to justice. In the course of role-playing intimacies, Charlie develops sincere feelings for Gadi—an attraction more serious than a crush, more substantial than a delusion. Onscreen, this romance is intriguingly spooky but not entirely persuasive, partly because Skarsgård is playing a man whose emotional composition is forbidding terrain: stone and ice. There is not a lot of distance between his vigilant professional glares and his searching emotional gazes.

Their boss is Martin Kurtz, played by Michael Shannon, whose typical air of demented menace is repurposed as a golden aura of iron will. Behind a friendly mustache, his fingers quietly anxious with worry, Martin makes like a chess master or a military tactician. When the action wheels into Munich, we linger at the Olympic Village, where Martin reminds his subordinate of the slaughter of Israeli athletes, by way of justifying their mission. “The Little Drummer Girl” doesn’t quite have any politics; it expresses its ethics by grappling with questions of endangering and extinguishing a few lives for the sake of preserving many more. Foremost, Kurtz is the artist imagining the intrigue that floods the screen. He is the distinguished author of an outlandish plot. He considers his adversary, the terrorist mastermind, “the Mozart of bombs.” With the panache of an impresario, he introduces himself to Charlie as “the producer, writer, and director” of her clandestine escapade. Sending her off into the field, he adds, “This is your debut in the theatre of the real.”

The design of the miniseries employs period detail to the effect of dressing that real world in chic surrealism. The sets are loud in a style that announces “The Little Drummer Girl” as a mood piece, not a yarn. A fleet of sculpted sedans, gliding in a dreamlike manner, ferry secret agents and furtive rebels to their rendezvous points. In the long moment of Gadi and Kurtz revealing their motives to Charlie, she wears an incandescent yellow slip dress and looks like a canary making a trembling descent into a coal mine.

US Tried, Failed to Kill Iranian Officer in Yemen on Day...