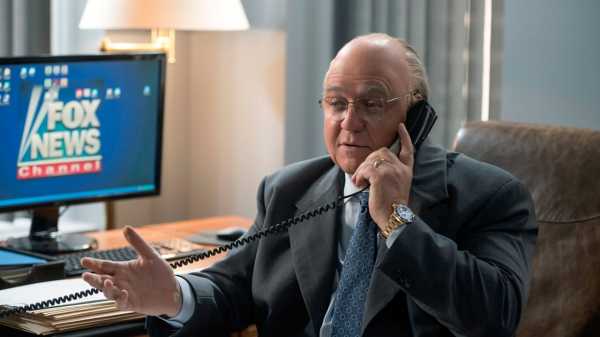 “The Loudest Voice,” on Showtime, which sizzles forth the story of the Republican media consultant and reprehensible television executive Roger Ailes, opens, in 2017, with an image of his body sprawled on the floor and his brain dying of a subdural hematoma. In a voice-over, Russell Crowe, playing Ailes, anticipates his own obits: “I know what people are gonna say about me. . . . ‘Right-wing, paranoid, fat.’ ” I almost wish I were woke enough to chide “The Loudest Voice” for body-shaming his corpse. But the fat stuff is nicely done, in keeping with the meta-tabloid juiciness of the five-episode miniseries, which was developed by Tom McCarthy and Alex Metcalf, from reporting by Gabriel Sherman. It’s a pungent profile of a nauseating figure. Crowe, in his opening moment, is shot to look like a beached whale.

As the living, wheezing Ailes, Crowe carries the weight in different styles, to vary the mood. He is Falstaffian when jolly with loathing for Obama, and a Sydney Greenstreet–like kingpin when lifting a finger to squash a career. Sometimes, performing humility, he is J. Wellington Wimpy scamming a hamburger. Crowe manages expressive subtleties despite a prosthetic-makeup job so complete that you spend minutes searching for signs of the actor within it, and wondering how the tricks were done, and maybe deciding that the actor, cladding his bulk in power suits, is somewhat performing on the level of a puppeteer, like Caroll Spinney as Big Bird.

Crowe’s Ailes also modulates his voice according to circumstance, switching codes and putting on voices of authority. His accent tends to sonority when, at a 2008 event in his home town of Warren, Ohio (the kind of hardscrabble town that has survived many years of reporters on the Trump beat interviewing its locals), Ailes discusses the need to “make America great again.” But, on the phone with Karl Rove, he is busy with rectitude—as bland as the Man. His sexist wisecracks, wise-guy sneers, and salesman’s banter are as colorful as his assaultive obscenities.

The show picks up both its biography and its anthropology of corporate and social cultures in 1995, when Ailes’s idea to create Fox News began its metastasis. It’s December, and he is Scrooge-ishly glutting on hot cakes in a diner. In retrospect, we come to understand that the waitress who innocently wishes him a “Happy Holidays” actually fired the first shot in the War on Christmas, a war later joined by Bill O’Reilly, among other hucksters. In the moment, Ailes mutters, scoldingly, “Merry Christmas.” The series presents the view that Fox News programming is essentially a propagandistic edit of Ailes’s own conservatism—nakedly self-interested, casually jingoistic, tacitly white supremacist, theatrically aggrieved, and guided by the kind of military-industrial-strength view of the world propounded on the editorial page of the Wall Street Journal. But otherwise not very ideological, really.

The first episode, which recaps the launch of the network, is the least appealing of the four installments screened for critics. It is hard to get an audience emotionally invested in the challenges of starting Fox News—imagine rooting for the timely completion of the Death Star. The episode plays like an odd combination of startup-business thriller and Jacobean revenge play. Ailes is a mean schlub with a big hustle, and his idea of success is settling grudges.

I love the sets and locations: the polish of the elevators, the nods to “Network,” the attention paid to the signifiers of executive-suite potency, the expense-account cocktail crawl through midtown Manhattan. I’m more ambivalent about the airport-bookish tone of the power-play scenes in which Ailes manages Rupert Murdoch from below, and, in a later episode, about the soapiness of his squabbling with Lachlan Murdoch. (“I run Fox News, not you!” Ailes says. Seething, Lachlan replies, “I’m the deputy chief operating officer of News Corp. News Corp owns Fox News.”) At moments, you even feel encouraged to scan the show for management lessons, and are reminded to bully your reports. Aleksa Palladino plays Ailes’s executive assistant, Judy Laterza, as a human soul trapped within an electronic Rottweiler; Seth MacFarlane’s performance as Brian Lewis, who worked as Fox News’s head of P.R. and as Ailes’s in-house spy, constitutes a special achievement in smirking.

The second episode unfolds from the attacks of September 11th. Boldly, it uses footage of the collapse of the World Trade Center in a way that tiptoes toward jerking tears while simultaneously scrutinizing Ailes’s decision to exploit imagery of carnage. Flamboyantly, the episode uses a literal heavy drumbeat when scoring the production decisions attending the network’s run-up to the Iraq War. Clever compositions enliven the shots of cameras and control rooms, where screens within screens transmit tendentious opinions to the American people.

Ailes resigned from Fox News, in July, 2016, with a forty-million-dollar severance package, shortly after Gretchen Carlson filed a sexual-harassment suit against him. Naomi Watts plays Carlson as someone gathering reserves of strength and poise to run a gantlet of intimidation and shame. In the early part of the season, Ailes’s primary victim is Laurie Luhn, played by Annabelle Wallis, whose casting is especially perfect for her adherence to the precise type of blond beauty standard favored on-air at the network. The queasy-making scenes of their hotel-room meetings are blunt and effective. Ailes, enjoying the perks of high-stakes yellow journalism, captures images of Luhn with a camcorder in one hand and paws at her garter belt and distressed face with the other. The vision of a predatory male gaze rings a bell with Michael Powell’s “Peeping Tom,” about a woman-killer with a greedy camera. The imagery is all the richer in the context of the political pornography aired on Fox News. “The Loudest Voice” sees the behind-the-scenes culture of sexual assault and the onscreen show of Barnum-ized reactionaryism as two curves of the same lens, which is trained on America and not necessarily opposed to airing anything, especially if it did strong numbers in the demo.

We asked 5 senators about Congress’s inaction on gun control

To defend journalism, we need to defend the truth and not...

Man Accidentally Kills Neighbour with Crossbow While Trying to Save Him...

Tommy O’Donnell returns from injury ahead of Munster season opener