Home Culture “The Masked Singer,” Reviewed: How Did We Get Here? | 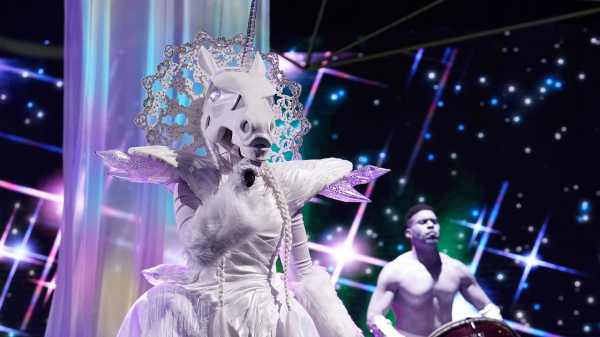 What is “The Masked Singer,” the new reality-TV competition on Fox? It is David Cronenberg force-feeding “The Voice” a tab of acid. It is a family of zombie Teletubbies, whistling off-key. It is a corruption of a corruption, which perhaps is a kind of purity.

“The Masked Singer,” which premièred on Wednesday, is an Americanized version of a popular South Korean show in which singers, both famous and unknown, compete wearing elaborate disguises. Theoretically, this insures that the judges are evaluating the performers without biases based on looks or prior reputation. The host of the Fox show is the everyman performer Nick Cannon, whose dazed m.c.ing is complemented by his gigantic ruby slippers, crimson pin-striped suit, and pretty pink boutonniere. A boutonniere? Is the dopey flower a gag? Will Cannon press on it, and will it spit water, and will we, snapped out of the trance, question why we are watching grown adults in animal costumes sing Top Forty empowerment hits?

The twelve contestants are all celebrities of unknown rank who hide their bodies in gilded and fluffed regalia and their speaking voices with pitch-shifters. The body horror is agreeable. The singing is real. Some of it is excellent (an unspecified number of competitors are professionally trained); mostly, it is fine. The creatures compete against each other in pairs. The audience, and the judges—the motley crew of Robin Thicke, Jenny McCarthy, Ken Jeong, and Nicole Scherzinger—vote for their preferred performance, which does not necessarily correspond to mine. A one-eyed character known as the Monster, with cerulean fur, offered an admirably gritty rendition of Queen’s “Don’t Stop Me Now,” but he (it?) could not challenge the indistinct girl power of the Unicorn, who sang Hillary Clinton’s campaign anthem, “Fight Song,” by Rachel Platten. At the end of each episode, the being with the fewest votes is booted off and asked to remove its mask. The first loser, a hip-hop hippopotamus who dabbed effortlessly to Bobby Brown’s “My Prerogative,” revealed himself to be a very handsome N.F.L. wide receiver.

The other contestants in the première episode were the Peacock, the Lion, and the Deer, who, in the face, resembled more of a steampunk armadillo. Performing Imagine Dragons’ preening rock-trap earworm “Thunder,” he made his virility apparent with a pair of protruding horns. “I chose the deer because they are incredibly competitive,” the contestant said. Unlike his peers, he refused the body-suited background dancers, preferring instead to stand alone amid barren trees and thick fog. Gender insecurity, it turns out, can be conveyed through inches and inches of fabric.

Prior to each performance, there is a pre-taped “clue package,” in which the contestants dangle hints about their identity for the judges to pick at. The Deer, we learn, is a professional fighter. The Peacock “chose to become the Peacock because we both show love for the spotlight.” Was he Jimmy Kimmel, who’d grown up in Vegas, the panel wonders? (I think he’s Donny Osmond.) “Some might say I am Hollywood royalty,” the Lion said, from its perch on a throne. Is it Ireland Baldwin? The guessing game has the potential to flatter or offend.

“This is probably the most bizarre show, because I am talking to a peacock,” McCarthy observed. The producers of the “The Masked Singer” would surely love to have their show received as backdoor surrealist, a commercial sendup of the pomposity of pop performance art. Lady Gaga, the queen of masks, was invoked frequently in the première.

Yet underneath the limp “believe in your true self” marketing and its naïve avant-garde aspirations, the series sprouts from hallucinatory corners of the Internet, like YouTube’s creepy mass-produced videos for children. In this sense, the show seems to me part of a post–“Black Mirror” generation of network TV. In Charlie Brooker’s universe, a woman’s consciousness is held hostage in a Teddy bear; a talent show is peopled by pacified slaves. On “The Masked Singer,” the competition is freeing, the stuffed animals safe. What if we rebrand the dystopia as wacky? the show asks. Cultivating the cutesy creepiness dulls any sense of unease. (See, too, “Beat Shazam,” also on Fox, in which contestants compete against the music-identification machine.)

Fox was the network that débuted the bright-eyed, blue-collar promise of “American Idol.” We are no longer in those sanguine days. “American Idol” is dying in its new home at ABC; long live “The Masked Singer.” The début’s numbers were massive, and the built-in cliffhangers guarantee a steady audience. Obviously, I have to keep watching to find out which Beverly Hills It Girl is behind the Unicorn. What past humiliations has the Monster suffered? “I am the Monster because that’s what the world labelled me,” he said in his talk segment, as he emerged from a cave. The panel wondered aloud if he had been to jail.

What you need to know about the new Samsung Galaxy S9