Home Culture The Meaning of Tracksuits | 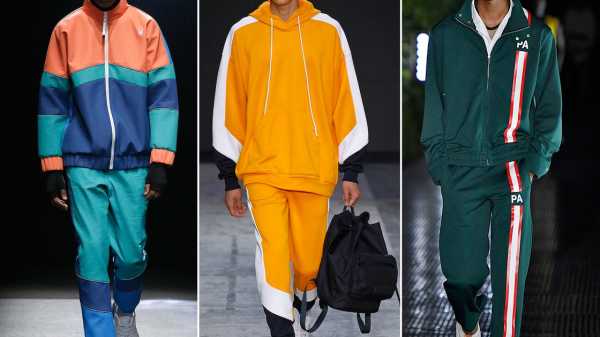 Earlier this year, my girlfriend, Allison, got a new job, and we moved from Brooklyn to London. In the lonelier times since, I’ve taken comfort in local pleasures: pints, kebabs, a particularly catchy chant celebrating the Tottenham Hotspur midfielder Moussa Sissoko. But, more than anything, I’ve taken pleasure in tracksuits. London is, joyously, full of them. Teens at bus stops. Grown men pushing strollers. Mothers, brothers, sisters. Just now, I looked out the pub window and saw a young fellow strolling by in a smart gray Nike trackie.

My obsession started before we left the United States. Last year, for no particular reason that I can recall, I began having a very strong desire to own one perfect tracksuit. In my head, I knew what I wanted. But I couldn’t articulate it. Allison was aesthetically opposed but morally supportive. For Christmas, she bought me the classic Adidas suit, the one with three stripes running from ankles to wrists. Then, for my birthday, she got me a striking Diadora number; she warned me that a man on the Internet had claimed the strange tailoring of the pants had left him looking “like a buffoon.” I got more: a barbed-wire-patterned one from the hipster Dutch label Patta; a garish red one from the cheapo U.K. brand Boohoo Man. I now have enough to dress myself full time, if I wanted to, in tracksuits.

Some are busts; some are staples. But I haven’t found that one Holy Grail tracksuit. And now I wonder: Why have I become obsessed with the tracksuit?

Writing for Ssense earlier this year, Ayesha A. Siddiqi coined the excellent phrase “track pant globalism.” “A track pant,” Siddiqi explained, “is the single article of clothing as likely to be worn in a refugee camp in Calais, or by a south London DJ, an Asian grandfather on a walk, or a supermodel. Today’s track pants are not a ‘new trend,’ they’re a culture shift. Like denim jeans before them, which were once only strictly for cowboys, we’ve reached full saturation of the tracksuit.”

The track pant is the true all-purpose item, available to be dressed down or up or in a million different directions. The tracksuit is less common but punchier in appearance. The same point stands for both: they are now multitudinous. And, counterintuitively, it is the nature of their saturation that gives these items power.

Adidas launched its now internationally renowned tracksuit in 1967, with an ad campaign starring the West German soccer legend Franz Beckenbauer. Joanne Turney, a professor of fashion at the University of Southampton’s Winchester School of Art, has tracked the American embrace of the tracksuit to James F. Fixx’s “The Complete Book of Running,” from 1977, which became a best-seller. Fixx evangelized running as life extension, Turney explains in her book “Fashion Crimes.” This put the runner, in his tracksuit, in a “God-like role,” both “man and superman, ego and super-ego, performing a Foucaultian battle that will ultimately result in the mastery of the mind over the weakness of the flesh.”

By the early eighties, acts from the Bronx and from Hollis, Queens, had made the tracksuit the uniform of hip-hop. Since I had my pop-culture coming of age in the mid-nineties, I associated tracksuits in hip-hop with dusty “old school” acts. I didn’t want their uniformity; I wanted the anarchy of the Wu-Tang Clan.

It was grime, the U.K. strain of rap, that made the tracksuit relevant in music again. In “Inner City Pressure: the Story of Grime,” from 2018, Dan Hancox describes how tracksuits became synonymous with the unadorned reality that grime aspired to represent. As the South London musician Novelist told Hancox, “Telling me to take off my tracksuit, it’s like telling me to change my skin color or something. It’s just who I am: I’m from the ends, that’s what I wear. . . . Even mum’s wedding, I might just get a white tracksuit.”

That I now live in London and spot tracksuits all the time is, surely, partly a case of me seeing what I want to see—my version of the Baader-Meinhof effect. But the U.K. mass-market retailer JD Sports, a bastion of tracksuits, has reported regular growth that bucks the general decline of the high-street shop. I go into JD’s sometimes, just to look. (And, O.K., maybe to run my hand along some polyester.) There is a sense of latent potential there that, I suppose, some people associate with an art gallery or a house of worship.

The tracksuit is rap culture, and it is street culture—and, naturally, it has been co-opted and monetized by more apathetic, more ruthless forces. Juicy Couture enjoyed an early-two-thousands heyday selling very expensive velour women’s sweat suits. Paris Hilton, Jennifer Lopez, and Britney Spears all did their part to make them iconic. Nowadays, brands like Gucci and Prada have entire “activewear” and “jogging suit” collections. Simultaneously, the tracksuit hasn’t gone just high-fashion but also quasi-intellectual. The Russian designer Gosha Rubchinskiy is famous for a specific oblique athleisure aesthetic that’s become known as “post-Soviet.” In collaborations with Adidas and Fila, he has utilized Cyrillic lettering and staged fashion shows in Kaliningrad. His models often sport shaved heads and a pallor that, in this context, seems to suggest the food shortages of failed centrally planned economies. Despite allegations that he has solicited nudes from underage models via social media, he continues to be a prominent figure in the fashion industry. A “manifesto” for GR-Uniforma, his newest line, reads, in part, “Uniform, Can, Help, You, Not, to Feel, Alone.”

A few years ago, in the Daily Beast, Joshua David Stein argued that high-end designers aren’t borrowing from rap music “so much as they are flirting with the latent violence of the tracksuit in English . . . lad culture.” By lad culture he specifically meant football hooligans, a subculture that shaped conversations about English identity for decades but that largely no longer exists. “The very act of strutting down the jutting tumescent runway, as it penetrates a crowd of onlookers,” Stein wrote, “is itself an act of violence.” A bold claim! But, really, nothing needs to penetrate anyone. The tracksuit, by itself, is powerful enough to represent danger.

The tracksuit’s association with violence is ephemeral, misunderstood, and inescapable. It comes from many places, all at once. The spectre of football goons, for sure. But also Tony Soprano’s open-on-the-undershirt tracksuits, and various lazily rendered, vaguely Slavic Hollywood hitmen. (As an aside: the next time you’re reading a history of sectarian warfare in the Balkans, note how often the author mentions assassins in tracksuits.) In the U.K., fear-mongering tabloids such as the Sun print hand-wringing articles about the dangers of drill music, another London rap genre, which are filled with outlandish, simplistic characterizations: “A huddle of tracksuited teenage men glare into the camera, making guns with their fingers as they rap about how many people they’ve stabbed.” The tracksuit becomes a very specific shorthand, an additional tool with which to demonize young black men. There are implications of class war, too, in the ways that the tracksuit is perceived. As Siddiqi writes, the tracksuit was popularized, in large part, by working-class people, who were “questionably labeled ‘chavs, racaille, and gopniks.’ ”

How can something so specifically utilitarian mean so many things to so many people? Denim is largely taken for granted, but, when called upon, it can still represent a flat, generalized “Americanness.” The tracksuit has followed denim’s path into universality partly because of a shared practicality: like denim, the tracksuit is comfortable, affordable, and durable. But, at least for now, the tracksuit isn’t taken for granted. It’s still enigmatic. It still has power.

Where do I fit into this tradition? I’ve had a realization about something that is surely absurdly obvious to others: clothes can make you feel strong. And I’ve come along late, to coast on the hard work of others. When I wear my Fila in London, I get to borrow the cultural cachet gifted to the tracksuit by the largely black artists who have made grime such a rich genre. I also get to borrow from a modern version of U.K. lad culture.

And last year, when I wore my Diadora to the Mermaid Spa, in Sea Gate, Brooklyn, I was cosplaying as an older Russian-American man in his natural habitat of banya rest and relaxation. I have family ties to early-twentieth-century St. Petersburg, but as I strode into the calming humidity in my buffoon pants—the ones that ride so strangely high on the ankles and so strangely baggy and low around the crotch—I wasn’t doing any good-faith reclamation of ancestry. I was indulging in pure fantasy.

Kimi Raikkonen giving nothing away about McLaren rumours

How to flip a witness, as explained by a former federal...