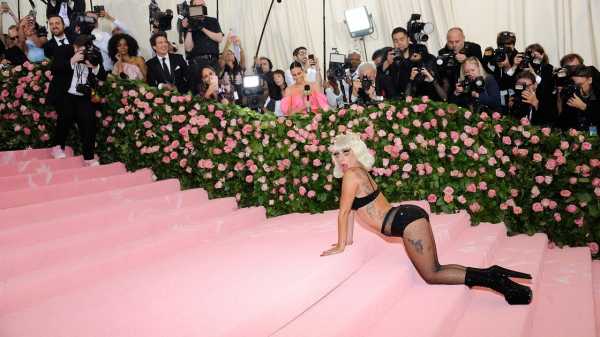 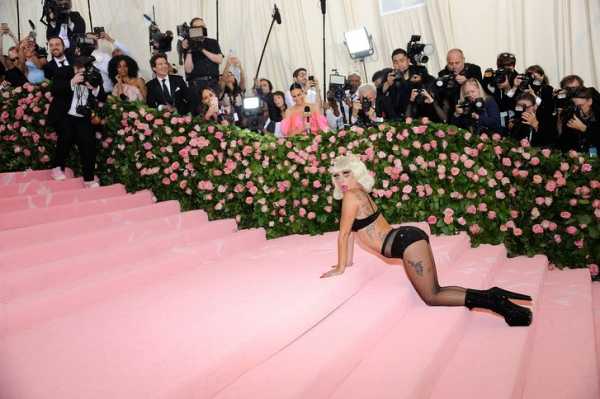 Lady Gaga was one of many celebrities who tried to embody the 2019 Met Gala theme, camp, to various degrees of success.

When Susan Sontag began writing the essay that became “Notes on Camp,” in 1964, her goal was to “name a sensibility,” as she later told an interviewer for Salmagundi. The one she chose was “morbidity,” not camp. But after a while she changed tack. “By deciding to write ‘Notes on Camp’ instead of ‘Notes on Death,’ I was choosing to humor the part of my seriousness that was being zapped and loosened up and made more sociable by camp wit rather than to fortify the part of my wit that got regularly choked off by seizures of morbidity,” she said. Instead of death, she chose to write about life; life at its gaudiest and most bursting-at-the-seams, life as vibrant and ridiculous as a hat made out of flamingo feathers.

Sontag described camp as a “private code,” and said that to speak about it is to betray it, that the moment one tries to pin camp down it starts to change and wriggle away. But this has not stopped critics from asking “But what is camp?” for more than five decades, and it did not stop Anna Wintour and the curator of the Metropolitan Museum of Art’s Costume Institute, Andrew Bolton, from selecting camp as the theme for this year’s Met Gala, thereby roping a gaggle of celebrities into a near-impossible assignment. According to a Page Six item that ran a few days before the Gala, several stars were “freaking out” beforehand because they didn’t understand the theme and just wanted “to look pretty.” “Notes on Death” would have been easier—just imagine Katy Perry in full Victorian mourning gear.

Sontag was not the first writer to try to define camp; before her, Christopher Isherwood had the narrator of his 1954 novel, “The World in the Evening,” muse that, when it comes to camp, “You’re not making fun of it; you’re making fun out of it.” The Met has dutifully devoted a room to “Isherwoodian Camp,” featuring erotic letters between men and photographs of Oscar Wilde, and another to “Sontagian Camp,” with an electronic ticker around the rim of the room displaying bullet points from Sontag’s essay. (In both galleries, and throughout the show, a loudspeaker pipes in Judy Garland singing “Somewhere Over the Rainbow.”) A Pepto-pink hallway is dedicated to Sontag’s idea of camp as “Failed Seriousness,” and along it you will find articles including chunky multicolored platform Ferragamo sandals and a staid black Yves Saint Laurent gown from 1983, featuring an oversized pink satin bow grafted to the back. The curators then juxtaposed these examples of naïve, or “pure,” camp, as Sontag called it, with modern pieces that they call “deliberate camp”: Gucci platforms with rainbow foam soles, a Moschino dress with a life-size picture of the 1983 Y.S.L. gown printed flatly on the front, like a paper-doll costume. This second group of items, in quoting the first, is an example of “camping,” or camp that is aware of itself—which, Sontag noted, “is usually less satisfying.”

If this is true, did this year’s gala stand a chance? The Met Gala has always, in a sense, been an exercise in failed seriousness: for one night each year, we come together to watch celebrities try to master high fashion, try to please Anna Wintour, and try to complete the homework that the Met has assigned them. Very often they fall short. There are moments of glory, but there are also moments of glorious or perplexing tackiness: Sarah Jessica Parker in a nativity headpiece during the Catholic-themed ball, Ashley Olsen in a loose tangerine caftan during the gala dedicated to punk rock. The gap between what the guests attempt and what they achieve, between how they want to look and how they actually look—well, that’s the glorious, messy fun of it, and perhaps as close to naïve camp as we’re likely to find. But in naming the Met Gala theme as camp this year, the hosts risked stamping out any accidental campiness, or at least the kind that comes from making glamorous mistakes. 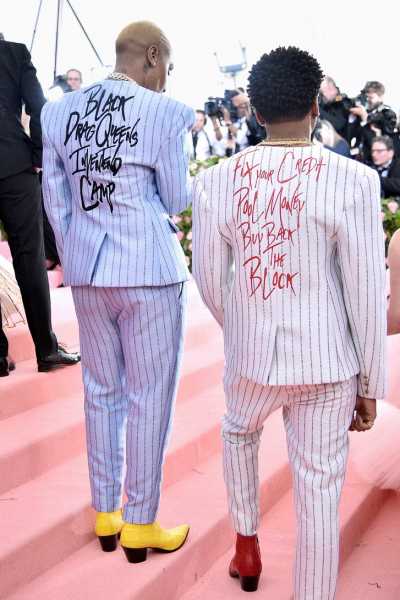 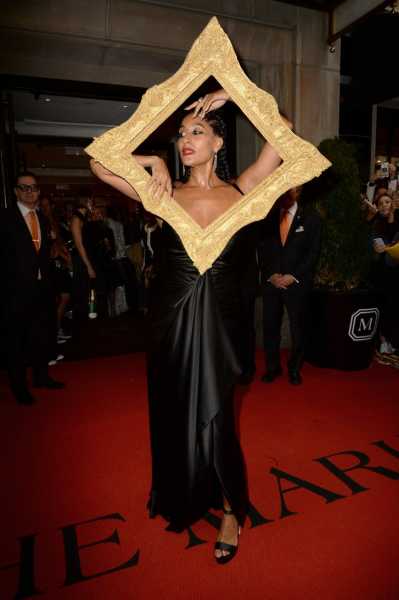 The comedian and writer Lena Waithe arrived on the red carpet (actually a pink carpet) wearing a suit printed with the words “Black Drag Queens Inventend Camp.” The message was clear: camp has always been a mode for marginalized people—queer people, people of color—to reclaim the idea of taste from the dominating class; it’s about infusing great meaning into the elements of culture that people choose to discard. In that sense, it is absurd for a group of wealthy—and mostly heterosexual—celebrities to attempt to embody camp by wearing thousand-dollar gowns. As the writer Jack Halberstam recently said, in a roundtable discussion in the Times, “At the point that it becomes a show at the Met sponsored by Gucci, let’s be clear that we are not in open rebellion.” Waithe’s outfit called out this incongruity, but the essence of camp in her outfit was a typo on the jacket—“inventend” instead of “invented.” It was a small mistake, easy to miss, but, once you noticed, it seemed like a crack in the veneer, a reminder that so much of what we consider to be glamour is held together by boob tape and wig paste. 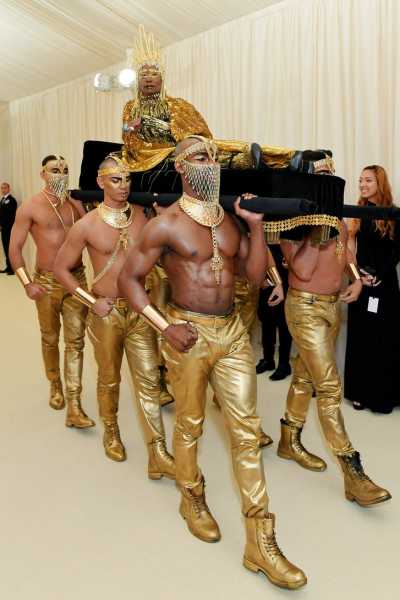 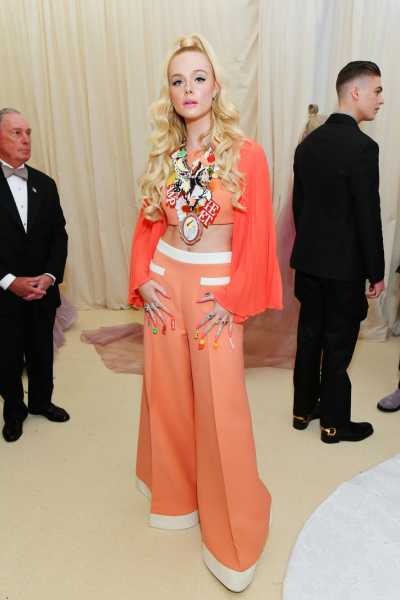 Some of my other favorites of the night: Elle Fanning in a “Valley of the Dolls”-esque cantaloupe trousers-halter-top combo from Miu Miu, with bright blue eyeshadow and nail charms of tiny plastic items of fast food; Kim Kardashian (whose exaggerated body is already a locus of camp discourse) in a Mugler trompe-l’oeil corset dress dripping with fake crystal water droplets; Cardi B in a canyon-sized maroon Thom Browne gown that looked like a California-king duvet cover dipped in blood; Billy Porter’s Cleopatra cosplay, complete with six shirtless Broadway dancers carrying him aloft, on a golden palanquin; Zendaya’s cheeseball neon Cinderella gown that lit up like Disneyland’s electric-light parade (with a clutch in the shape of a pumpkin carriage); Tracee Ellis Ross wearing an ornate picture frame around her face; and Lady Gaga’s twelve-minute striptease, during which several of her dancers fumbled with umbrellas while she twirled around in a Schiaparelli-pink overcoat made by the designer Brandon Maxwell. I can’t say that these outfits succeeded as camp, but they were the ones that made me laugh, whose performative tastelessness offered a sense of sublime surprise. 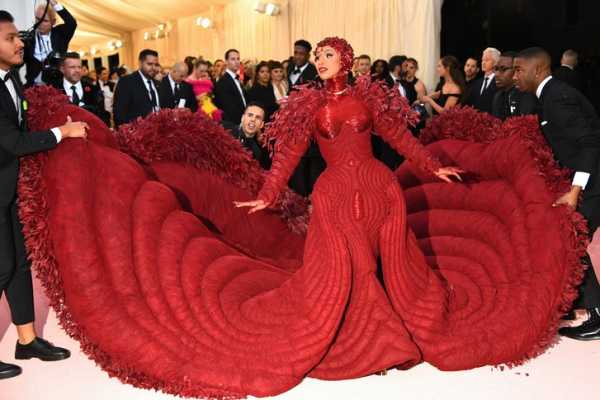 I also have to commend Jared Leto for arriving in a Gucci Sgt. Pepper uniform while carrying a waxen replica of his own head, a nod to Gucci’s runway show from February of last year. The reference is too new to be vintage and too old to be cool. We’d already seen the gag in a fashion show, so it did not hold any shock or mystery. Plus, the Gucci heads take months to make, which means that Leto must have planned his costume far in advance, really trying to slay the theme. This element of overachieving, of desperation to dazzle, was very camp. On the other end of the spectrum, I appreciated Frank Ocean’s plain black Prada windbreaker, an outfit of pointed underachievement; subversive camp may be happening somewhere, it seemed to say, but it is certainly not happening here.

In the end, the campiest event of the night did not happen on the pink carpet. Cher, the evening’s musical guest, did not bother to walk the runway. Instead, she showed up in the Temple of Dendur after everyone was already drunk. Wearing jeans and a puffer coat, she sang a cover of an ABBA song for the crowd. At that point, Katy Perry had changed from a chandelier-bedecked costume that she wore on the carpet into a giant cheeseburger. Harry Styles, wearing a single pearl earring and a dandy mesh blouse, was dancing with abandon, on top of a chair, as Cher sang “Believe.” Cher did not dress up as camp, because she’s already living it. She had nothing to prove. And, as for the director John Waters, whom many believe to be the godfather of camp sensibility? According to one reporter, he spent the evening downtown, going for a long walk.