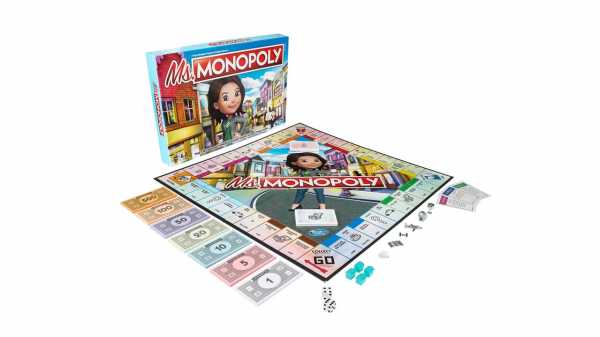 In 1906, Lizzie Magie, a feminist writer, activist, and game designer, who was then forty years old, placed an ad for herself as a “young woman American slave.” She was, she wrote, “intelligent, educated, refined; true; honest, just, poetical, philosophical; broad-minded and big-souled, and womanly above all things.” A petite brunette with “gray-green eyes” she was, in her own description, “not beautiful, but very attractive, features full of character and strength, yet truly feminine.” The stunt, which was meant to raise awareness about women’s inequality, including Magie’s own weekly pay as a stenographer, made headlines nationwide. It came just three years after she filed a patent for the Landlord’s Game, today known to most consumers as the board game Monopoly. “We are not machines,” she told a reporter at the time of her slave advertisement. “Girls have minds, desires, hopes, and ambition.”

This week, Hasbro, which sells Monopoly, announced the latest incarnation of the game: Ms. Monopoly. According to the press release, which makes no mention of Magie, the new title character, a smiling chestnut-haired woman in a blazer wielding a travel coffee cup, “is an advocate whose mission is to invest in female entrepreneurs.” The company claims that it’s the “first-ever game where women make more than men.” In this version, female players start out with nineteen hundred dollars in their coffers and male players receive a mere fifteen hundred. Women receive two hundred and forty dollars for passing Go, but men are stuck with the same two hundred dollars as in standard Monopoly. In a promotional video, featuring soft piano background music and scenes of girls soldering, sketching, and kicking ass in white lab coats, Hasbro notes that only ten per cent of patent holders are women.

The response has been, well, more Baltic than Boardwalk. A number of right-wing pundits and Twitter users lamented that Hasbro has become too politically correct. Comments were hurled about “Get Out of Jail Free” cards tied to false #MeToo sexual-assault allegations and women trying to profit off of sexual-assault settlements. Critics on the left argued that the lopsided economics of the game aren’t actually promoting equal pay. But, somewhat encouragingly, another common response was that Hasbro’s attempt to tout its new title as empowering to women, while ignoring a woman’s role in creating the game, was, at best, hypocritical. At worst, omitting Magie from the Ms. Monopoly story only reinforces the false, misogynistic, and all-too-common belief that Monopoly is, then and now, purely a man’s game.

In the five years I spent reporting my book “The Monopolists,” published in 2015, which chronicled the discovery of the board game’s invention, Hasbro declined to comment or acknowledge Magie’s role in originating the game. Magie’s story is widely accepted by game historians and bolstered by at least two patents, myriad newspaper clippings, U.S. Census records, letters, several sworn depositions, the U.S. Supreme Court, and acknowledgment in the National Women’s History Museum and the Smithsonian. But, when I asked a Hasbro spokeswoman this week about Magie and the Ms. Monopoly game, she credited Charles Darrow as the person who had invented the game, in 1935, three decades after Magie had received her patent. “However,” the Hasbro spokeswoman said in a statement, “there have been a number of popular property trading games throughout history. Elizabeth Magie—a writer, inventor, and feminist—was one of the pioneers of land-grabbing games. In 1904, she received a patent for the Landlord’s Game, which was meant to educate people about the dangers of wealth concentration.”

Hasbro, a multibillion dollar juggernaut based in Pawtucket, Rhode Island, wields considerable influence over the minds of young girls and boys. Since my book’s publication, I’ve heard from countless female game designers, software engineers, executives, and other girls and women hoping to blaze their own careers, particularly in male-dominated worlds, who were inspired by Magie’s revolutionary exploits a century ago. She received her patent for the Landlord’s Game before women could vote, let alone dream of making an iconic creation that millions would enjoy a century later. She did so at considerable risk. The story of how Monopoly came to be is an overlooked chapter of American capitalism, perhaps one that mimics the often cruel nature of the board game itself. All told, Magie earned a mere five hundred dollars for her game and died, in 1948, without children, working in obscurity in secretarial work.

Women have complained of being drowned out, overlooked, and ignored for centuries. But now, especially in the #MeToo moment, more people appear to be listening. Countless women have come forward to file charges against their abusers. Raises and promotions are being demanded—and hopefully received. Sports fans chanted “Equal pay!” in the stands this summer at the Women’s World Cup. Over all, that’s all tremendous news. But Ms. Monopoly also underscores an effort by Madison Avenue to champion feminism as a branding gimmick rather than make tangible change. Consider the backlash faced by Gillette, Hard Candy, Nike, and State Street, among others, for using female-forward messaging as a source of profit, often at odds with their own companies’ policies toward women. If Hasbro is serious about women’s empowerment, perhaps the company could start by admitting that a woman invented Monopoly in the first place.

When Magie placed her “slave girl” ad more than a century ago, she said that it was partially in search of a benefactor who could help provide her with the time and means to develop and publish other games that she was working on. Echoing the girls in the Hasbro promotional video, she had professional goals and sought out funding to try to make them into a reality. “I wish to be constructive,” she said, “not a mere mechanical tool for transmitting a man’s spoken thoughts to letter paper.” She wanted an “opportunity to develop the best that is in me.” A flood of responses came in, including a crank offering her a hundred and fifty dollars “to pose as a freak in a dime museum.” Upton Sinclair sent her money and an offer for a visit, which she took him up on. A clergyman in New York called her stunt “offensive and a disgrace against morality.”

Years later, Magie, still designing games in her spare time, said that she didn’t regret her public push for equal pay. But it hadn’t landed quite the way she hoped. “Most people missed the point in my advertisement for bids,” she added. “But, on the other hand, a multitude understood, and I may now have an opportunity to be heard.”

The “pleasant ambiguity” of Medicare-for-all in 2018, explained