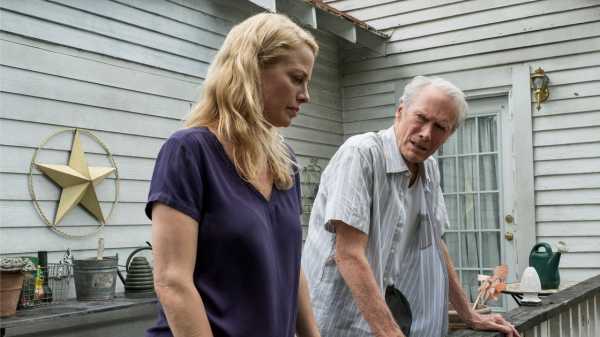 To the best of my knowledge, Clint Eastwood has never taken part in a drug deal, or ever committed any offense at all, besides talking to the empty chair and praising Donald Trump. Nonetheless, his new film, “The Mule,” in which he stars as a ninety-ish courier of illegal drugs who tries to stay a step ahead of the law, plays less like the clever action film it is than like a personal work—a movie of self-retrospection with a resonant, romantic air of regret. Even if Eastwood, who is eighty-eight, goes on to make many more films, this one feels like the closing of a very long and complex chapter in his cinematic life, and perhaps the opening of a new one.

The character he plays is Earl Stone, a Peoria horticulturist who eventually loses his house and garden to foreclosure and, in dire financial straits, accepts a job making deliveries from El Paso to Chicago for a drug cartel. (It’s loosely based on a true story, from 2014, that appeared in the Times.) But the action starts in 2005, better times for Earl, who, jibing saltily at his property with his three employees, Hispanic men (he calls their beat-up early-sixties car an invitation to deportation), prepares for the local horticultural version of the Oscars, held in the ballroom of a small hotel. Earl arrives duded up in a seersucker suit and a straw hat, breezing through the room like a Peoria star and, at the banquet, winning his prize. Yet he soon realizes that he has screwed up: his daughter, Iris, is getting married that same day—and he has missed it. His ex-wife, Mary (Dianne Wiest), tells Iris, “Your father always chose work over family.” Lest anyone miss Eastwood’s self-implication in this aspect of the story, which proves to be the movie’s central through line, the role of Iris is played by Alison Eastwood, one of the filmmaker’s own daughters—a symbolically resonant coup of casting worthy of Godard and Cassavetes.

Cut to 2017; Earl, long dismissive of the Internet, is losing his house and garden to foreclosure (his flower business has been outdone by online suppliers). He pays off his three employees, packs his things in his beat-up pickup truck, and shows up at the pre-wedding brunch of Iris’s daughter, Ginny (Taissa Farmiga), who is now grown, where he turns out to be persona non grata: Iris hasn’t talked to him since 2005, and he is welching on his promise to pay for Ginny’s wedding. On his way out, a young man follows him to his truck and passes along a business card with the fateful offer for him to make money. “Just for driving?” Earl asks. It’s the first moment in the film that displays Earl’s personality as the product of his sophisticated powers of con-artistry.

In “The Mule,” Eastwood plays a delicious game with Earl’s age and temperament. Earl frequently seems out of touch, naïve, blinkered, flustered, backward; he doesn’t exactly dodder, but he fumbles, embarrassed or unembarrassed, getting himself into uneasy situations from which the social infirmities of age ultimately get him excused. Earl comes off at times as a codger who says and does innocently inappropriate things that would never be tolerated in younger people, yet the movie delivers some of its sharpest, slyest winks in its hints that Earl knows exactly what he’s doing—that he’s a roguish coot who, under his crusty manner, is a master manipulator.

With his faux-naïf manner, Earl enters into his new life of crime with an ironically bland air of innocence. As his license-plate frame proclaims, he’s a Korean War veteran, and his combat experience, far from making him combative, appears to have made him wary. He doesn’t carry a gun or even give any suggestion that he owns one; he doesn’t attempt any superheroics against people who are armed or even threatening; he doesn’t look for trouble. His dealings with his assault-weapon-bearing handlers in El Paso are marked by a blend of bewildered distraction and quiet bravado that he intertwines with a pianist’s precisely applied touch.

What he looks for instead is day-to-day adventure of an altogether milder sort. He varies his drug routes to render them more scenic; he makes frequent stopovers for good local eats, enjoys a farm fair, and thereby incurs the wrath of his Mexican-cartel handlers. As a drug mule, Earl is, in effect, an independent operator in the cartel’s studio system, who, because his drug runs prove exceptionally lucrative for the cartel—and because he has the confidence of the big boss, Laton (Andy Garcia)—enjoys a measure of freedom that is denied to other employees.

Earl makes use of his sudden new wealth to put his life into order. He pays off his mortgage, reacquires his house and garden, buys a shiny new pickup truck; he tries to mend fences with his family by means of financial help; and he performs local acts of philanthropy. Each of these aspects of financial need—whether involving banks, schools, or insurance companies—suggests broken or indifferent institutions that present needless obstacles to the basic needs and simple pleasures of ordinary people. (There’s even a nudge at latter-day changes in the movie industry, from the personal to the corporate.) It’s the underlying impersonality of these institutions—signified, above all, by the abstractions of the Internet and the distractions of life on cell phones and online—that suggests, in Eastwood’s vision, the wider catastrophes that are ravaging the American psyche. They’re marked, in the film, by an alienation from physical labor, whether in the conversion of a tire shop to a cartel headquarters or in people’s increasing inability to change their own flat tires.

As a struggling independent drug mule, Earl faces the soul-killing, and perhaps even body-killing, demands of a new cartel regime. Yet along with those threats, Earl faces an entirely different realm of threats—from law enforcement, both those officers whom he happens to encounter in the course of his travels and those working from the top down, at the D.E.A., and whose efforts to take down the cartel threaten Earl’s new livelihood. Three of them are prominent: Agent Bates (Bradley Cooper), a star detective who has been brought to Chicago to take down the cartel; his second-in-command, Agent Trevino (Michael Peña), whose local knowledge is crucial to the operation; and the head of the agency (Laurence Fishburne), whose sincere sense of duty is tempered by his awareness of a bureaucracy that puts extreme pressure on him for short-term results, at the risk of proper procedure and thorough investigation.

Law enforcement comes in for some of the movie’s most ardent and stringent critique, which comes full circle through another endemic element of modern American life: guns. The film’s vision of open-carry laws and the ease of acquisition of firearms is sharply negative—it’s depicted as a boon to criminals and to assholes with short tempers, and a rationale for the militarization of policing to an absurd and dangerous level, which, in turn, is shown to encourage the worst impulses of officers. There’s a scene in “The Mule” regarding a potential drug arrest, in the guise of a traffic stop, that’s as bitter and angry as similar scenes in “The Hate U Give” and “Widows,” and as explicit about the deadly effects of the racism that’s all too common in policing. Even Earl’s seemingly ignorant and unintentionally offensive use of such terms as “beaner” to refer to Mexicans and “Negro” to refer to a black family—which appears at first to be merely provocative and cringe-inducing comedy—is linked, in the course of the action, to society’s wider, practical, and harmful racism. Along the lines of the Safdie brothers’ 2017 crime drama, “Good Time,” “The Mule” shows what a white guy (and, all the more, an old white guy) can get away with just by consciously playing the role of himself.

In “The Mule,” Eastwood offers, under the surface of the expansive, tense, twistily plotted, and often (even in moments of great tension) good-humored action, a grand vision of modern life—and an even grander view of how Earl’s personal failings (his fractured relationships with members of his family) fit into a wider societal context. As much as “The Mule” reflects nostalgia for a time in which business was, in many ways, more personal, it also undermines its own air of nostalgia. Eastwood depicts the long, inescapable pain of a life lived in rigidly gendered times: in which men like him were expected to make a living and provide for their families, and women were expected to manage the family’s domestic life. Alongside the frustrations and injustices borne by women, Eastwood suggests that men, too, have suffered from unchallenged traditional gender roles—they have been emotionally impoverished by the imposed distance from their wives and children. (It’s noteworthy that Earl is the father of a daughter; a son would likely have had a different role in the story.)

Eastwood could have emphasized even more clearly Earl’s efforts—and his own—to acknowledge the past half century of changes by casting a woman in one of the movie’s roles of civic authority, as one of the D.E.A. agents or the bureau chief. (It’s easy to imagine a scene of banter that would have confronted Earl gracefully and reverberantly with the changes that, in his hermetic assumptions, he has missed.) Nonetheless, “The Mule” is a vision of loss and pain, of a life lived in a fog of emotional bewilderment, in which achievements and adventures were set against a time of prejudices and expectations that drove men and women into inevitable conflict. Eastwood is one of the great political filmmakers. In “The Mule,” he reveals his own scars, his own failings—and inscribes them on a societal landscape in which those very failings were among the trappings of success. He seems to contemplate his own path through life, and, cinematically shaking his head, wonders how in the hell he got to where he is. It’s a vigorous movie of outliving old beliefs, looking back at them regretfully, and finding oneself over the edge, in free fall, with no way out except for the ultimate one.

“The details are irrelevant in terms of decision-making”: Joe Biden answers...

Trump sues House Democrats to stop them from getting his financial...