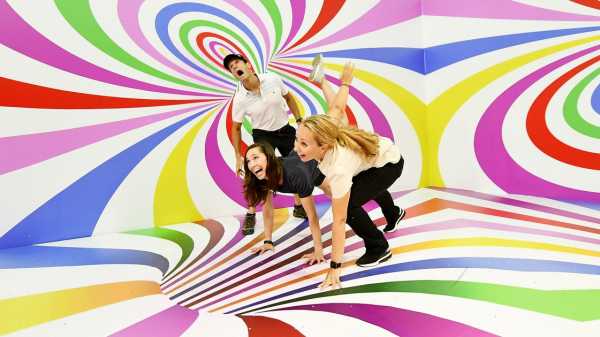 Candytopia, the pop-up exhibit with locations in Manhattan and San Francisco, shares some characteristics with Disneyland—a costumed guide, manufactured fantasy landscapes, giddy kids—but there are no rides. In Candytopia, there’s very little to do but pose, and that’s what everyone’s doing. The installation is organized around a series of rooms with different themes; you move through them lured by the promise of sweets in each one. There are intricate sculptures of animals and fantastic beasts, made from gummy bears and jelly beans and jawbreakers. There’s a ball pit full of fake marshmallows and a wax sculpture of Katy Perry.

Candytopia doesn’t purport to be a museum, exactly, or an amusement park, or a retail location. It’s a combination of all those things, but it’s billed mostly as an experience. It’s one of the latest in a series of such pop-up “experiences,” which are almost certainly coming to a city near you. Some explicitly brand themselves as museums, and others shy away from the term, but they’re all exhibits of sorts that are also mostly a series of backdrops for Instagrams.

What the creators of these experiences have realized is that a lot of people want to take pictures of themselves in a museum, without going to a traditional museum. So they’ve created temporary, overstuffed spaces that are geared toward online aesthetics and I.R.L. consumption. The trend was set with the Museum of Ice Cream, the confusingly successful pop-up “museum” devoted to everything saccharine. It opened in Manhattan, in 2016, and then made its way to Los Angeles, San Francisco, and Miami. The space showcased a particular brand of pink that the company is seeking to trademark. Other pop-up museum experiences followed: Color Factory, Dream Machine, A. Human, the Egg House, Rosé Mansion. Opening soon in New York: Human’s Best Friend, a dog-themed pop-up, as well as the Museum of Pizza.

A lot of these experiences are themed around food, or incorporate it somehow. Candytopia is the extreme in this regard, quite literally transmuting artwork into candy, in a mock gallery that filled me with psychic dread. There’s a jelly-bean recreation of the Mona Lisa. The candy version of Edvard Munch’s “The Scream” is jokingly captioned, “I scream, you scream.” There is a reproduction of one of Andy Warhol’s Campbell’s soup cans, made of red gummy bears, silver sprinkles, white mini jawbreakers, and more. “Just call me Candy Warhol,” the caption reads, and now we have people Instagramming photos of a candy reproduction of a piece of Pop art. 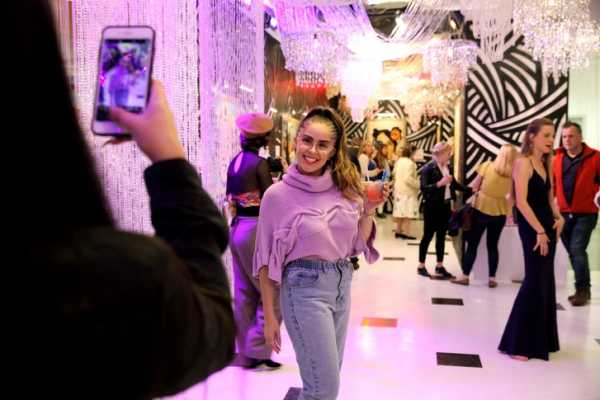 Candytopia doesn’t purport to be a museum, exactly, or an amusement park, or a retail location. It’s a combination of all those things, but it’s billed mostly as an experience.

The pop-ups, above all, are a bright series of backgrounds for photographs, which is what a lot of traditional museums have started to become. Some museums pander to the Instagram habit —or at least unwittingly encourage it—by using splashy technology. See: augmented reality for the René Magritte exhibition at the San Francisco Museum of Art; virtual reality for Bodys Isek Kingelez at MoMA, in New York. But tech or no tech, visual art in 2018 is increasingly a set piece of sorts, an aesthetic signifier that can mean “taste,” or “contemplation,” or “having a good time,” depending on the artwork in question. Rothko paintings are particularly good for this, judging by their popularity online; they flatten easily into bright swaths of color, while maintaining a certain cultural cachet.

The pop-up museum spaces seem like the logical (if bizarre) extension of this phenomenon. Color Factory, which recently opened in New York after a wildly successful stint in San Francisco, even eliminates the need to take selfies, as cameras installed in the exhibit snap photos throughout it. Color Factory bills itself as a “celebration of color and creativity” replete with a ball pit, a dance floor, balloons, and My/Mo Mochi. It’s one of the more likeable of these pop-up spaces; it incorporates the work of more than twenty artists, and it’s meticulous in its execution. The creators have even crafted a color palette inspired by New York City, with names like “F Train” and “Manhattan Bridge.” Nonetheless, the experience of moving through the twenty-thousand-square-foot installation in SoHo has a vacuous quality. After being paired with a stranger in a group drawing exercise, you give them a card featuring a cookie-cutter compliment. And that’s just the start.

Pop-ups are also almost by definition “hot”; they’re installed for a limited time, often pricey, and require being somewhat in the know. There’s a growing retail economy built around them, as the Financial Times reported recently. Brands are blending the desirability of a pop-up space with the concept of a museum-like experience. Winky Lux, a makeup brand, raised six million dollars in venture capital for a series of “experience-first retail plans.” The founder pitched the Winky Lux Experience as what you’d get “if Sephora and the Museum of Ice Cream had a baby.”

The Winky Lux location in the back of a SoHo storefront feels remarkably similar, albeit on much smaller scale, to Candytopia or Color Factory. Each room is designed around a theme and aesthetic—in this case, inspired by one of their products. In the room where their Dream Gelée moisturizer is marketed, puffy clouds hang from the ceiling and are painted all over the walls. In a room themed around their Coffee Bronzer and Coffee Palette, there’s a miniature fake coffee shop, in “Alice in Wonderland” pastels. There’s even the requisite ball pit. (Who knew that the experience people are craving is an iteration of Chuck E. Cheese.) Instagram or tweet throughout: #winklyluxexperience. Your ten-dollar ticket goes toward the purchase of a product at the end.

Why brands constantly email to ask how you feel about them

Here’s how many people watched Ireland beat the All Blacks on...