Home Culture The Mysterious Relationship Between Pets and Their Owners | 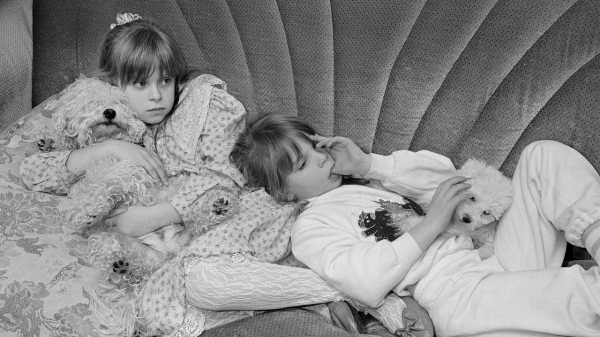 Halfway through the photographer Sage Sohier’s new book, “Animals,” is a picture of a woman and her small daughter at the dining table of their home in Sterling, Connecticut, in 1992. The child is playing, oblivious to the scene around her. Her mother, dressed in a pale robe, has a telephone in one hand and her head in the other, looking exasperated. Sohier had met this woman at a dog show and learned that she was the owner of several vizslas—a photogenic breed, like a smaller, reddish Weimaraner. Here are four of them: two perched officiously on dining chairs and another pair lying under the table, like dozy sidekicks. The muscular canine quorum looks calm and in control, as if a coup has taken place in the household. The drapes are closed and considered looks are exchanged in a scenario whose cartoonish wit, crowded domesticity, and faintly sinister air are common in Sohier’s images of pets and their owners. 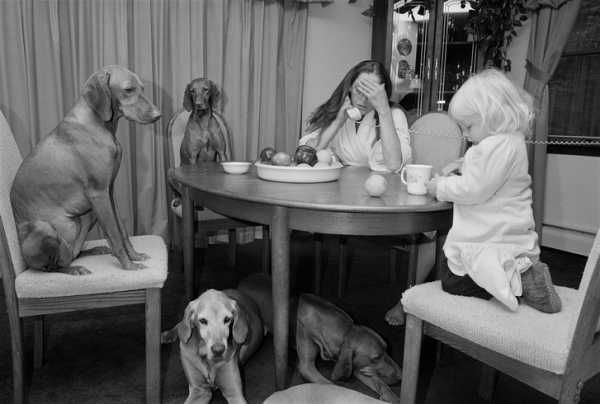 “Mother and daughter with vizslas at the dining table,” Sterling, Connecticut, 1992.

The photographs in “Animals” were taken mostly in New England between 1979 and 1993. Sohier’s career began in the late seventies with black-and-white studies of Boston (where she still lives) and beyond, documenting street and domestic life and the scratchy pastoral of suburbia. She was working in medium format, with wide-angle lenses, so that these early pictures bristle with intimate detail but also frame expanses of air and atmosphere, a lot of “mere” background. Later series include “At Home with Themselves,” which featured portraits of same-sex couples, and “Perfectible Worlds,” a study of the anxious utopianism of enthusiasts or hobbyists: model makers and reënactors, the floridly tattooed and the gym-inflated. “Animals” overlaps with some of these earlier projects; Sohier found that her subjects were often more at ease with their pets at hand. Later, she discovered potential subjects at dog and cat shows or in small ads for litters, then spent a couple of hours at home with them while they revealed a telling variety of interspecies relationships. 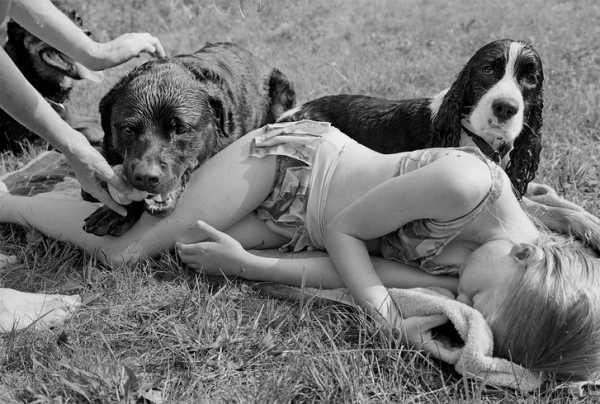 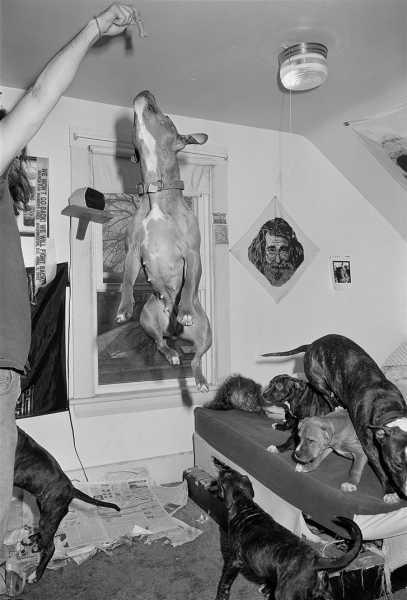 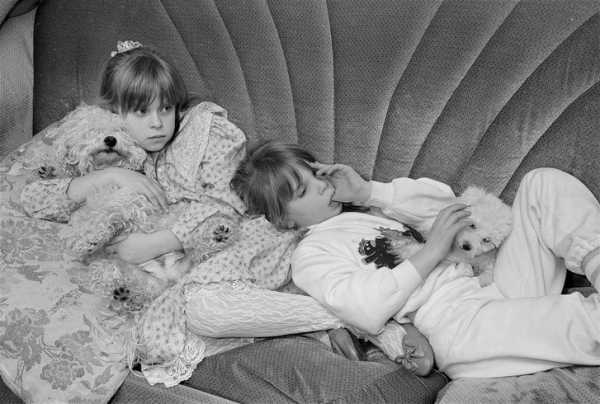 John Berger once wrote that animals promise “a companionship offered to the loneliness of man as a species.” Although a gulf divides us, “our” animals look at us the way no human ever will. There are moments in Sohier’s book when the pathos in this relationship—one of trust, wonder, (mostly) mammalian identification—is movingly present. A woman named Deborah sits in her living room with Snowy the llama, whom she used to bring on instructive visits to local schools. A young girl is resting on the grass in the sunshine after a swim, while over her shoulder a sopping poodle gives us a protective stare. And most fragile and compelling of all: sitting in a high chair and wearing a nightdress, a monkey reaches out its hand to grasp the arm of the otherwise unseen person who is spoon-feeding it. 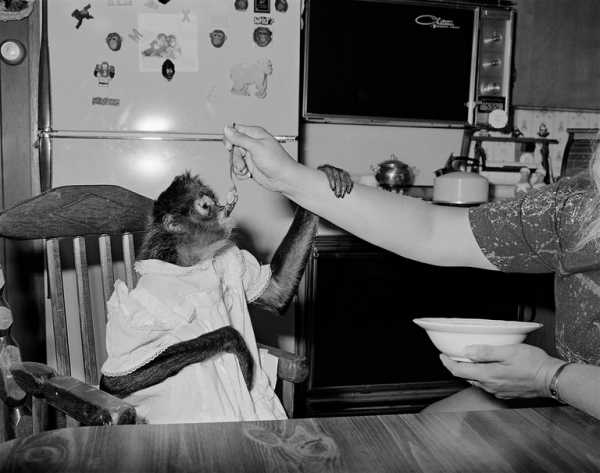 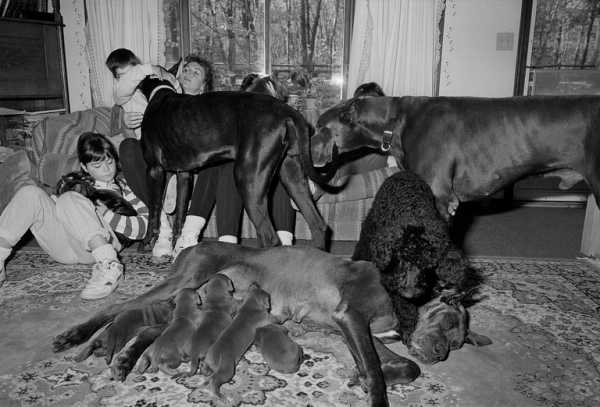 Frequently, however, the paradisiac scene of cross-species contemplation goes to hell in a riot of fur, teeth, scales, thrashing paws, and shining mad eyes. As the series developed, Sohier looked for households with numerous animals and diverse species; her pulse quickened when litter ads said things like “Raised with children and other animals.” In several of her photographs, the owners are dwarfed by their more or less monstrous charges. A family in Blackstone, Massachusetts, gathered on the couch, has vanished behind a poodle, three Great Danes, and five puppies. (Look a little closer—there’s a cat, too.) Likewise, a woman in Plympton, Massachusetts, is obscured by her whippets and greyhounds. And what to make, in one of the most alarming images, of the woman in leopard print who is wielding a boa constrictor as if it’s a huge saxophone? You wonder, of course, what such animals are thinking. Something, perhaps, like the subject of Elizabeth Bishop’s prose poem “Giant Toad” —“I am too big, too big by far. Pity me.” 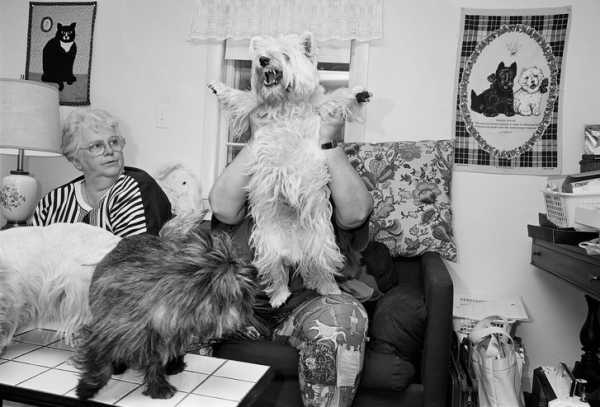 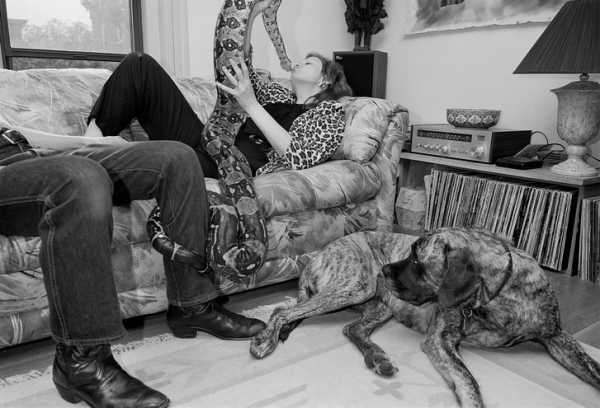 “Larry and C.J. with Miles and Nikita,” Brookline, Massachusetts, 1992. 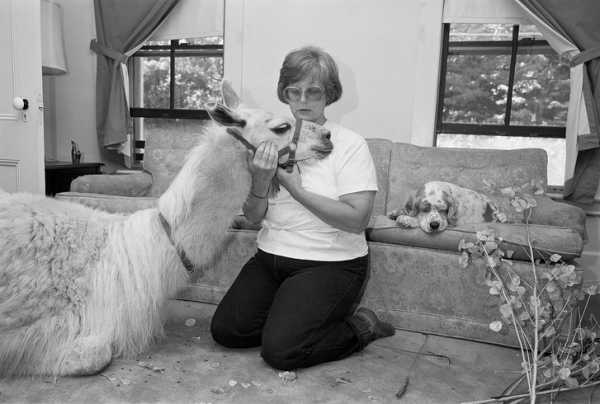 “Deborah in living room with Snowy the llama and Winnie,” Freedom, New Hampshire, 1993.

Pull back from the animals in Sohier’s wide-angle photographs and you find—more animals. A Boston terrier looks quizzically at three rats on a bed (one of the rats was named Sage) while dozens of stuffed-animal toys look on. The owners of dogs, cats, snakes, and pot-bellied pigs have decorated their homes with pictures of dogs, cats, lions, penguins, and unicorns. These are mounted on the walls alongside dog-show prizes, baby pictures, and guns. As Sohier acknowledged when we spoke recently, “Animals” is now also a record of certain American tastes and textures in the nineteen-eighties and early nineties. The book begins outdoors, in the back yard, where, a few pages in, a girl in stonewash denim cradles a rabbit, and a German shepherd gets sprayed in the face by a hose. There is a gradual movement indoors, toward a species of anonymous suburban pastel and plush, where all the visual excitement is supplied by animals and children, but the décor still somehow insists. 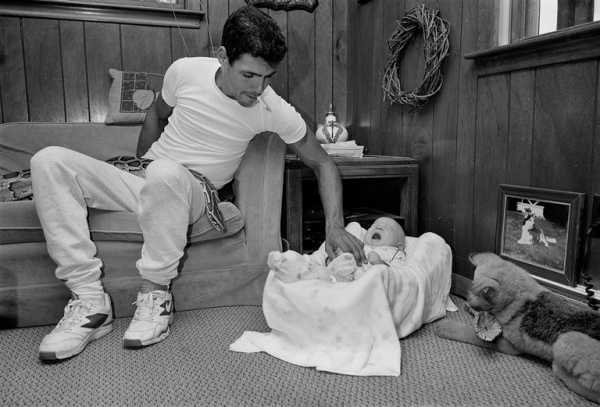 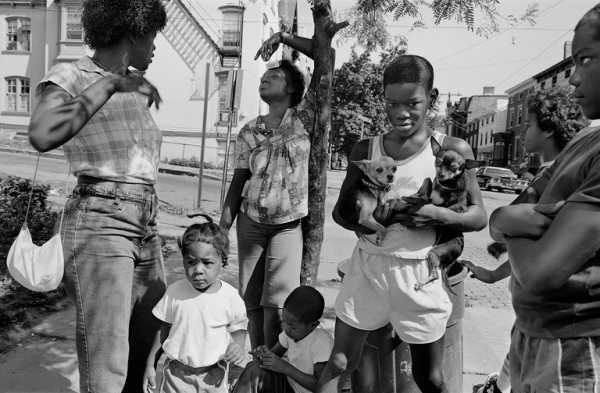 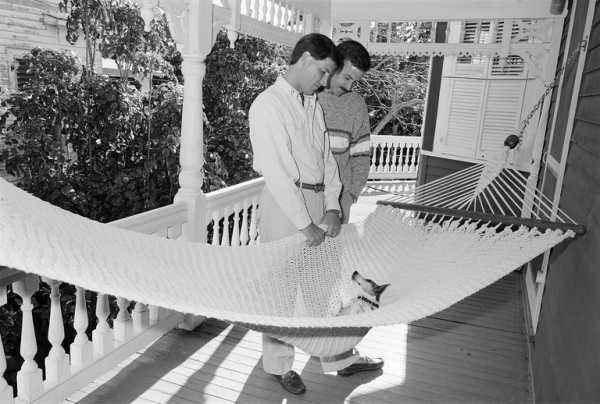 Sohier’s book is also a reminder of the long history of animals in photography: from daguerreotypes of domestic pets in the eighteen-forties, through the cats of Cartier-Bresson, to our present social-media zoo, in which animals are reduced either to the cute or the cursed. (I say this as one who has just lost twenty minutes online, gazing raptly at border collies. Chocolate-colored border collies.) For Sohier, the animal photographs of artists such as Elliott Erwitt and Garry Winogrand offer something else, a keener sense of the ethical and also the aesthetic encounter between human and animal. Writing in 1975 about Winogrand’s nineteen-sixties photographs from the Central Park Zoo, Janet Malcolm described “the dispirited ugly animals, the dumb (for thinking they are enjoying themselves), ugly people.” Sohier’s “Animals” contains no such withering scenes. But she notes today how little of the politics of animal ownership was present when she took these photographs, and how much has changed. 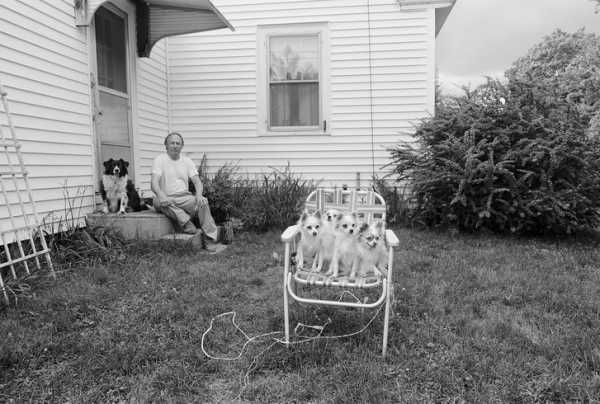 Ownership, environment, domination, and death: all of it is either present or implied when we photograph animals. Sohier is currently at work—in color, and having switched to digital—on “Peaceable Kingdom,” a new series of animal photographs that concentrate on rescue centers and the animals they save. (As she tells us in the preface to “Animals,” she currently lives with three rescue dogs.) The new images are often more tightly framed, as if the wild or vulnerable creatures they show—an inquisitive crow on its perch, a pair of blinded horses—might suddenly flee the composition. The people that Sohier photographs now have given up referring to “pets” and “owners.”

Russia to Return Remains of Napoleonic General Gudin to France Should...