Home Culture The Need for Art That Hurts | 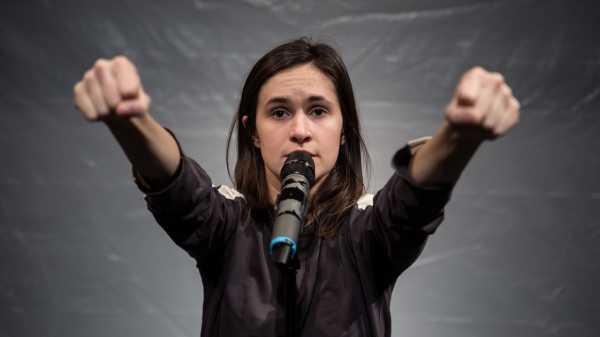 At the conclusion of “[50/50] Old School Animation,” part of this year’s Under the Radar Festival, at the Public Theatre, I lingered in the lobby, hoping for a little postgame discussion with a friend I’d bumped into before the show. He and I tend to have divergent tastes in theatre, and I wondered whether, in this case, the pattern would hold true. He was nowhere to be seen. “Did you flee?” I texted. “Fled,” came the response, nearly an hour later. The show had been that kind of experience, one that instilled a terrifying sense of dread, in a way that I thought was effective and possibly even necessary.

“[50/50],” written by Julia Mounsey, Peter Mills Weiss, Mo Fry Pasic, and Sophie Weisskoff, elegantly tackles an inelegant subject: betrayal by a friend—and the particular kind of stinging pain that ensues. It has a compact running time (fifty minutes), an economy of physical movement and production elements, and a subtle but wicked sense of pace. There are two discrete parts, each a monologue delivered by a different actor.

The first, performed by Mounsey, is both relentlessly slow and seems to defy time entirely. It begins in matter-of-fact fashion: on an otherwise empty stage, she nonchalantly greets the audience and says, dryly, “I’m going to talk to you for about twenty minutes, and then there’s going to be a performance.” The implication is that hers is not a performance, and, in those twenty minutes that follow, it does not feel like one. Standing resolutely still, with almost no modulation of her voice, zero theatrical affect, and nothing but a series of confessions to impart, Mounsey proceeds to ratchet up the tension in the room until it becomes hard for us to breathe.

Her overarching subject here is nothing less than the nature of evil, not as an inborn instinct or learned tendency but as something that is in the air, in the culture, in the universe—something that, from time to time, demands a release. Mounsey tells us about a particularly violent GIF she’s recently seen and wonders, rhetorically, whether we’ve ever experienced something “so well made it’s almost like no one made it . . . like the world made it.” Of course, we have; it’s an old trope, no less true for being so, that the genesis of great art, thought, and ideas lies in the Zeitgeist, and that creators are merely conduits, expressing what was already there. Mounsey subverts this idea, suggesting that acts of pure hatred and evil may also be expressions of the collective unconscious, and that they, too, may arise from the wellspring of creativity. Her unspoken hypothesis is that we created the conditions for 9/11, for Osama bin Laden, and for the hatred-fuelled disinformation campaign currently being dispensed from the highest reaches of American power, just as we allowed for the psychotic, murderous reigns of Adolf Hitler, Joseph Stalin, Pol Pot, and others, ad infinitum, throughout history.

It’s a thought that’s as compelling as it is radioactive, and Mounsey develops it with a blood-chilling calm. When she finally does start moving onstage, transitioning from almost complete impassivity to making one deliberate sustained facial expression, the threat of emotional violence manifests. Ushers had gently noted the locations of the theatre’s exits before the start of the show, should the performance become “too uncomfortable” for anyone in the audience, and now it became clear why this accommodation was needed. At the climax of Mounsey’s half of the piece, I had the undeniable feeling that she was about to hurt us in some horrible way.

The show’s second act, performed by Pasic, has an energy that is the opposite; it’s frenetic, frantic, feverish. Pasic is like a hopped-up laboratory animal that’s been administered a dangerously high dose of experimental drugs—but she’s a young, contemporary woman, and the untested drug in question is our relentlessly plugged-in culture. Unlike Mounsey, Pasic does not talk to us, and instead interacts with unseen people on her devices. Her character is needy and irritable, a jumble of nerves, so isolated that even her pet bird is present only on a large monitor.

We know the modern archetype being portrayed: the obsessive multitasker; tethered to technology and virtual platforms; using all the world as her private phone booth; perpetually experiencing FOMO; unable to tolerate the idea of just being. Pasic’s virtuosic performance elicits laughter at first, but it doesn’t take long for the worm to turn. Her sure, fugue-like delivery quickly turns our knowing amusement into a feeling of crushing sadness. Then that sadness gives way to horror, as this character’s disconnection from the world seems to completely overwhelm her, causing her to spin out like some overwound top. Unlike Mounsey’s segment, which uses subtlety and nuance to generate a sense of anxiety and then ramp it into overdrive, Pasic’s segment is marked by her committed physical and emotional performance, and it’s astonishing. Both women blow the roof off, but in vastly different ways.

I don’t fault my friend for fleeing the theatre. This is art that hurts, though, to me, the pain seems entirely appropriate, even welcome. It’s not art of the cloying variety; it doesn’t depict pain that is pity-seeking, or that aims to emotionally hijack an audience on a ride through some dreary personal catharsis. What “[50/50]” does is more noble than that—it gives form to the intense bewilderment felt by everyone and anyone who has not already become completely desensitized by our increasingly virtual brave new world. The show, with its visceral ghastliness, is right on time. If a gun can be made with a 3-D printer, if drones can deliver our mail and shut down our airports, if a six-year-old can stumble upon a decapitation video on YouTube, and if a reality-TV star can hold the most powerful office in the world, then we need work like “[50/50],” with its higher stakes and its ominous sense of peril, which is commensurate with that of our present moment.

Of course we need diversion. Of course we need entertainment. The Chicago-based company Manual Cinema’s adaptation of “Frankenstein,” also featured at Under the Radar, is endlessly imaginative and exquisitely beautiful. Both shows deserve to return to New York for longer runs. “Frankenstein” will transport you, which is no mean or small feat. But, if it’s invigoration you crave, if you want your distracted mind to snap to attention, if you want to freak out a little, keep your eyes peeled for a remount of “[50/50] Old School Animation.” The show reminded me of something a friend once told me about her experience of going to hear a favorite musician perform: “It’s like getting slapped in the face,” she said. “But in a good way.”

We deserve a better Medicare-for-all debate

The White House is standing by John Kelly — for now