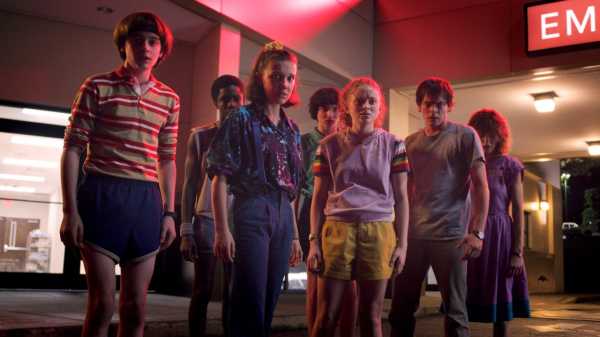 Watching a ragtag group of kids save the day never seems to get old. That’s what the Netflix series “Stranger Things,” the third season of which premièred on July 4th, continues to bet its success on. The Duffer brothers, the creative team behind the show, have blatantly plucked inspiration from a whole subset of popular films that feature children as saviors. But despite the nerdy fun of “Stranger Things,” its titillating action sequences and over-all pluckiness, the show reveals how the kids-save-the-day model represents a romantic but ultimately uneven idealism that has echoes in our current political moment. Guns in schools, climate change, terrorism—will the kids save us from those monsters?

In almost all of its core elements, “Stranger Things” Season 3 is a carbon copy of the previous two. This approach stunts the growth of the show, miring the plot in redundancies, but that may not matter much to some fans, who are happy to be given more of the same—even expected delights can still be delightful. Though the big baddie (the same one who buddied up with Will Byers in the second season, back for an encore performance) is badder and slimier than ever, the series’ D. & D.–style monsters are once again symptoms of larger antagonistic forces: shady governments and adults with nefarious intentions. Once again, the group, which now comprises the central Scooby gang of tween friends (Will, Lucas, Mike, Dustin, Eleven, and Max), one snarky preteen (Erica, Lucas’s little sister), and a few older teen-age allies (Jonathan, Nancy, Steve, and a new addition, Robin), leads the charge in saving the day. Though a small team of adults sweep in for the assist, most of the heavy lifting falls on the kids, and they step up to the challenge, as they always do.

When Erica gets roped into the monster madness, she proves to be an indispensable asset because of her smarts and small size, but she requires a bit more convincing to participate in a break-in to what an adult later describes as a totally impenetrable underground facility. It’s “Operation Child Endangerment,” Erica quips, as she crawls into an air duct. But none of the other kids seem to question their roles in the catastrophe, and none of them rely too heavily on the aid of adults. They insist that they have to soldier on themselves. The image of a group of kids boldly riding their bikes in the direction of, or away from, danger has become a cultural touchstone, thanks to, most famously, “E. T. the Extra-Terrestrial.” But there have also been the West Coast treasure hunters in “The Goonies” and the London alien-fighters in “Attack the Block.” The recent Netflix movie “Rim of the World,” a less elegant and less fun sibling of “Stranger Things,” also features a group of young outsiders who take it upon themselves to defeat a beastly threat. One of the kids, in a moment of frustration, after almost being killed by a seemingly indestructible alien, inquires, “Why is it up to us to save humanity?” It’s a valid question. In the course of the film, the kids must decide a jailed man’s fate and deliver a key that will stop an alien invasion. When they attempt to pass their burden on to adults, the adults inevitably fail them.

These stories about the courage of children and teens suggest that bravery and heroism are innate qualities of youth. But in that assumption also lies its counterpart: that youths are simply more capable than adults, and that some vital majority of adults are, at best, unable to rise to the occasion of grave danger and, at worst, are the cause of those very catastrophes. In “Rim of the World,” the adults are either drawn satirically, as fools and cowards who abandon the kids, or as immoral. The rest die or are M.I.A., somewhere where they cannot help. In “Stranger Things,” the adults are oblivious or corrupt, with few exceptions. The ones who are most helpful to the kids are themselves divorced from society in some way or another: the neurotic Joyce; the brutish, alcohol-dependent Hopper; and the abrasive conspiracy theorist Murray.

Such stories are neat fairy tales that we can place within the context of a larger political theme: the last few years have seen the rise of youth activists in the spotlight. After the Parkland shooting, March for Our Lives redefined the look of youth protest. Teens like Greta Thunberg and those involved in the Sunrise Movement have been actively fighting to raise awareness of climate change, as they are the generation that will suffer most from the legislative decisions older generations are making—or failing to make—now. With these teens came ready-made media narratives of heroic action and justice, framing the activists as extraordinary for taking the baton and running with it into what we can only hope will be a new future. But one can assume that, for those teens, it’s not so much about bravura and valor as it is about acting in line with their true feelings, facing down an issue that has turned into a moral imperative. Beneath the idyllic notion of a world in which kids, too, have the agency, power, and drive to incite change, there’s the reality of the fouled inheritance that is dropped in their laps. In so many of these kids-save-the-day stories, kids are not simply fighting supernatural beasts or ghoulish villains but the mess created and then passed down by adults and institutions.

A notable way that “Stranger Things” Season 3 differentiates itself is that it delivers monsters that are terrestrial rather than extraterrestrial, chthonic creatures that resemble or are composed of dirt, mud, and flowers. The alternative world where these creatures reside, the Upside Down, simply looks like a ravaged, polluted version of Earth; the damage is just under the surface, ready to be let loose, so the Upside Down can become the new reality. One can easily see how the story serves as an analogue for climate change in our current world. And then there’s the added bit of intrigue that comes from the Russians who are attempting to reopen an interdimensional gate between worlds—and are invited into town by a crooked, self-interested politician. (Sounds like collusion, no?) The Russians’ motives for reopening the rift aren’t clear, but the show gestures toward the Cold War. The kids’ easy infiltration of the Russian base and their breaking of the Russians’ secret code, however, renders the Russians, and the prospect of war, foolish. What is a Cold War, the show seems to say, to a group of precocious, wiseass kids?

In “Stranger Things” Season 3, the day—and the world—is ultimately saved, but not without cost. (Spoiler alert.) There are many casualties, and our superpowered heroine, Eleven, is drained of her powers. Late in the series, when the creature speaks to El, it says that it was let into their world—it was a parasite welcomed in by those careless and foolish enough to do so. And though the creature is destroyed, the kids have a rougher go of it; this season, more so than the previous ones, acknowledges how heavily the kids rely on El’s abilities. Without her, they improvise, but, ultimately, they’re at a loss. Also, our heroes are increasingly distracted by the normal changes that come with growing up—drama and romance. Their role as defenders of the world conflicts with their ability to live unremarkable teen-age lives.

Even in the show’s brightest moments (like a sudden duet of “The NeverEnding Story” theme song), “Stranger Things” exists in a fundamentally cynical world. Its villains and threats are redundant because, despite the kids’ efforts to save the world, adults keep making the same mistakes that put it at risk again. In March, Bill McKibben, writing for The New Yorker about students who have been protesting to call attention to climate change, said, “There’s something fundamentally undignified about leaving our troubles to school kids to resolve. It’s time for the elders to act like elders.” Though we gleefully watch the kids on “Stranger Things” make video-game references and fight monsters with slingshots, thinking how adorable they are, how cool and courageous, it’s not difficult to imagine what a dark world they live in, and that these kids are, somehow, unfairly, its only hope—and how that may never be enough.

A Century of American Protest |

“Where Love Is Illegal”: The Photographer Who Collects Stories of L.G.B.T.I....

After eight haunting losses, St Finbarr’s show they’re made of the...