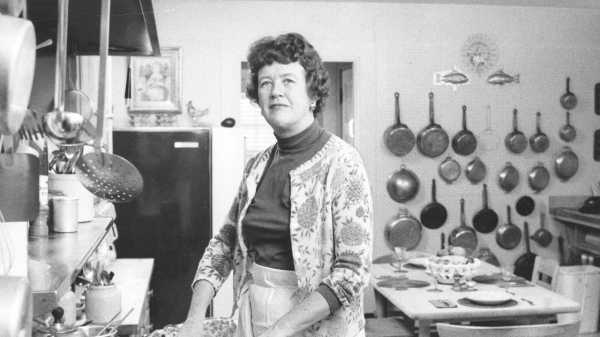 In 1942, Julia McWilliams moved to Washington, D.C., where she was hired as a file clerk at the Office of Strategic Services, the newly formed federal intelligence agency. She had been living in New York, but found herself at loose ends—unmarried at the decrepit old age of thirty, and nursing dashed hopes of becoming a writer. Less than a year later, she found herself stationed in Ceylon (now Sri Lanka), where she met and fell madly in love with Paul Child, a cartographer and aesthete ten years her senior. They were eventually both transferred to Kunming, China, and then returned to America after the war. They got married, in 1946, and landed, after some time, in France, where Paul worked in the U.S. embassy, and Julia was left to find a way to fill her days. She ended up at Le Cordon Bleu, in a morning class taught entirely in French and attended entirely by American soldiers on the G.I. Bill. The rest is the stuff of gastronomic legend: the love affair with French cuisine, and then the meandering and often tumultuous path to publishing “Mastering the Art of French Cooking”—the two-volume compendium, co-authored with Simone Beck and Louisette Berthold, that would make Julia Child the most famous French chef in the world, despite the fact that she was not a bit French, nor even (as she insisted her entire life) a proper chef.

The public Julia Child—Julia Child the culinary titan—looms so large that she often eclipses the person who existed outside the kitchen. Her private sides emerge, in part, in her biographies, especially those written by her nephew, Alex Prud’homme, as well as in her own voluminous correspondence, much of which is archived at Harvard’s Schlesinger Library. In a new volume, “Julia Child: The Last Interview,” a collection of conversations with journalists from throughout her life, the Child on display is quick and insouciant, as one expects her to be, pronouncing on methods for turning mushrooms and the pleasure of making one’s own vinaigrette. But in nearly four decades her voice evolves, revealling a steadily growing mastery in matters beyond the kitchen: the craft of making public television, for example, and theories of education and academia. A part of Julia that stands out in the volume (for which I wrote the introduction), one that I hadn’t previously appreciated, is her passionate political engagement.

Child grew up in Pasadena, California—in one of the book’s interviews, a 1989 conversation with the journalist Polly Frost, for Interview, she describes herself as “an innocent hayseed from a middle-class, utterly nonintellectual background.” In fact, the McWilliams family was quite well off: Child’s father owned and managed a great deal of land; her mother was the heiress to a modest paper fortune. As Frost points out, Pasadena was not a place known for its liberal values. “I was raised with very conservative beliefs, but that was a long time ago,” Child said. “In between I’ve lived in a lot of places, which makes a big difference. After a while you decide that you can have your own opinions.”

Child’s political awakening came during the McCarthy era, when she and Paul looked on in horror and rage as their friends and colleagues were subjected to the degradations of anti-Communist paranoia. In a 1991 interview with the journalist Jewell Fenzi, part of an oral-history project chronicling the lives of the spouses of Foreign Service agents, Child recalled when McCarthy’s deputies Roy Cohn and G. David Schine arrived in Europe, in 1953, for an eighteen-day tour intended to root out sedition. “We had quite a number of people who were just ruined by them,” Child said. In a letter to her longtime friend Avis DeVoto, she spoke with characteristic gallows humor:

Am terribly worried about McCarthyism, even more so than ever. How
could the State Dept. back down on that order about the left-wing
material? What pusillanimousity! How cowardly. What can I do as an
individual. It is frightening. I am ready to bare my breasts (small
cup size though they be), stick out my neck, won’t turn my back on
anybody, will sacrifice cat, cookbook, husband and finally
self…please advise. I’m serious.

The following year, just before Senator McCarthy began his infamous hearings, televised live to a rapt and terrified audience of millions, Child received a letter from Aloise Buckley Heath, a fellow Smith College alumna and the sister of William F. Buckley, Jr., the prominent conservative author and proponent of McCarthyism. Heath had written to Child, and to other Smith graduates, urging them to withhold donations to the institution until the college had sacked five professors suspected of being Communists. An enraged Child replied, “In the blood-heat of pursuing the enemy, many people are forgetting what we are fighting for. We are fighting for our hard-won liberty and our freedom; for our Constitution and the due processes of our laws; and for the right to differ in ideas, religion and politics. I am convinced that in your zeal to fight against our enemies, you, too, have forgotten what you are fighting for.”

After the wild success of “Mastering the Art of French Cooking,” Child cultivated an apolitical mien. Her television persona was that of a friend and teacher, not a dinner-party conversationalist. “The French Chef,” her first television show, ran from 1963 to 1973; while Child was urging her audience to engage with a classical, almost dreamlike version of French culture, actual France was in the midst of a tumultuous, often violent cultural recalibration, under DeGaulle’s fractious leadership. In America, her exhortations for the intellectual and artistic pleasures of cooking were broadcast simultaneously with the rise of women’s lib, a dissonance with which the show never directly engaged. (Her advocacy for seasonal vegetables, good dairy, and whole ingredients during the post-war golden age of canned and processed food was political only incidentally.)

But, over the years, as Child became more comfortable with her fame, she spoke more openly about her political beliefs, especially her support for Planned Parenthood and her disgust at the Republican Party. (While notably progressive for someone in her position, she was also very much constrained to the standards of the era for a wealthy, white woman: her perspectives on race and homosexuality, in particular, carry a patronizing air of demi-tolerance that is hard to stomach today.) In 1982, she authored a pledge letter for Planned Parenthood, sent to donors nationwide, which read, “Few politicians will take the risk of publicly supporting either contraception or abortion—and who is ‘for abortion’ anyway? We are concerned with freedom of choice.” That same year, she travelled to Memphis, Tennessee, to lead a series of cooking classes to raise money for Planned Parenthood, and was faced each day by a small group of anti-abortion activists protesting her participation. She recalled the incident in the 1989 Interview conversation:

At the time of that interview, George H. W. Bush had just assumed the Presidency, replacing Ronald Reagan and extending many of his policies. The Administration seemed uninterested in “doing anything about the environment,” Child said, in the same interview with Polly Frost, adding, “These people are anti-abortion, but they’re not doing anything for the future.” She went on, “If we go on as we are, polluting everything, we may very well end up like Venus, a great ball of fire. And I don’t think we have very much time.” Two years later, an eighty-one-year-old Child told Fenzi, the journalist compiling the oral-history project, “the American Institute of Wine and Food, that’s mostly what I do now. That, and I am very much interested in Planned Parenthood, and Smith College, and the Democratic Party.”

I attended Smith College some seventy years after Child. She was one of the institution’s most luminous graduates, certainly our most famous, and, when I was a student, she, already in her late eighties, would still make the trip from her home in Cambridge to visit her alma mater. I never met her, though I saw her once during my sophomore year, from a distance, making her way across the grassy campus. Reading the fiery letter she wrote to Aloise Buckley Heath, I wonder what Child would think about the darkness of America today, in some ways a reiteration of the bleak miasma of McCarthyism, and in other ways unique. In the closing paragraph of her letter, Child wrote that she not only refused to accede to Heath’s demand that alumnae withhold donations from Smith but that she would be sending an additional check. “I am confident that our Trustees and our President know what they are doing,” she wrote. “They are only too well aware of the dangers of totalitarianism, as it is always the great institutions of learning that are attacked first in any police state. For the colleges harbor the ‘dangerous’ people, the people who know how to think, whose minds are free.”

This piece was adapted from the introduction to “Julia Child: The Last Interview and Other Conversations,” which is out March 26th from Melville House.

Michael Flynn ‘putting his life back together’ after guilty plea in...

The Quest for the Next Great Hip-Hop Festival |