Home Culture The Perfect Simplicity of the Matzo Ball | 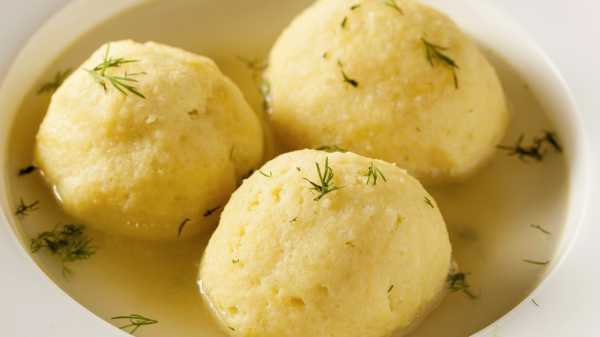 Matzo balls are not strictly a Passover food. Like the staples of other holidays—sugar cookies, mashed potatoes, miniature Kit Kats—they’re enjoyed year-round without much fanfare, but there’s one time each year when they throw back their shoulders and step into the spotlight. A Passover Seder (an intricate ritual meal that’s celebrated in Israel on the first night of the holiday, and outside Israel on the first two) calls for any number of specific foods, edible props called into service to illustrate the Biblical story of the Jewish people’s escape from slavery in Egypt. There is a roasted egg, for renewal; bitter herbs, for sorrow; green herbs, for hope; salt water, for tears; a lamb shank, for sacrifice; and paste-like charoset, a relish of fruit and nuts, which symbolizes clay and mortars that were used by the slaves in their labor. We eat matzo on Passover because, the story goes, the Hebrew people fled Egypt in such haste that they had no time to wait for their bread dough to rise and so baked it off into crackers. There is absolutely no ritual requirement for matzo balls. Spiritually, though, maybe even metaphysically, they may be the most necessary part of the Passover meal.

Matzo balls are straightforward, which is another way of saying that they live and die in the details. In theory, they’re a simple combination of matzo meal, fat, and eggs (cousins to fluffy drop dumplings that you might find swimming in gravy at a Southern meat-and-three). In reality, every batch is different, and every recipe is forged upon nostalgia, culinary precedent, and dinner-table argumentation. You want balls that are smooth and light, silken and spoon-sliceable, neither total puffballs nor dense, doughy sinkers. They should have flavor, salty and savory; they should be a credit to the soup they’re served in. Every family has its own flourishes—chopped dill, for brightness, or a little bit of bouillon cube, for savory depth. I like to use fine-ground matzo meal (which is sold, pre-packaged, as “cake meal,” though you can make your own by blitzing the regular stuff to a fine powder). I always use chicken fat (or duck fat!) instead of oil. I err on the side of too few eggs rather than too many. I roll my dumplings to racquetball size and poach them in generously salted water set to the barest smile of a simmer. I can’t confidently say that I make the best matzo balls, but I do know that the secret to the worst ones is pummelling them at a hard boil.

The matzo ball is perfect because it is so simple. Still, it can be tempting to experiment. I’ve become enamored, lately, of stuffed matzo balls, in which the pillowy dough is used to encase a savory filling. The method has traditional roots—wrapping a matzo ball around ground meat spiced with cumin and paprika echoes Iraqi kubbeh; adding chickpea flour to the mixture echoes Persian gondi, which I learned to stuff with sweet, sticky medjool dates, thanks to the author Adeena Sussman’s forthcoming cookbook, “Sababa.” Some stuffed matzo balls are novelties, like Max Falkowitz’s version, filled with chicken and dill, which represents every part of matzo-ball soup besides the soup inside. Not long ago, I came across a strange and wonderful cookbook from 1973 called “A Russian Jew Cooks in Peru.” Idiosyncratically hand-lettered, it includes a recipe for matzo-meal bocaditos (“little snacks”)—essentially, matzo balls stuffed with chopped liver and caramelized onions, one iconic Jewish food stuffed inside another—then brushed with egg and baked instead of poached. I made them recently, and they went so quickly that I made another round. I’ll be making them again, for my family’s Seder this year—another matzo-ball tradition for all of us to argue about and fuss over and, eventually, enjoy.

What to Stream This Weekend: Chris Marker, Chantal Akerman, and Other...

The military wants to build a bullshit detector for social science...