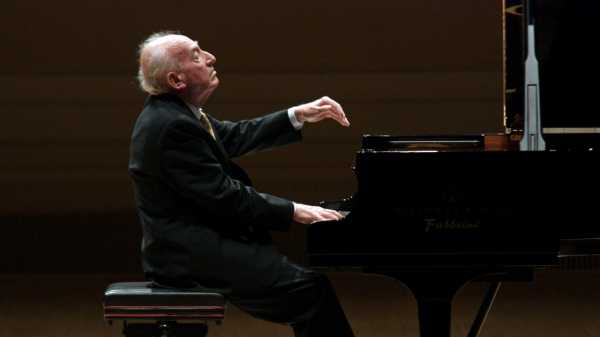 The principal delight of hearing familiar pieces played at classical-music concerts is the restoration of their shock value. Classical art is the modernism and aesthetic radicalism of the past, and the most exhilarating thing that I’ve heard performers do (in my forty years of attending classical concerts) is to remove the lustre of varnish—to pull the music out of the comfort zone of melodic appeal, cultural refinement, and emotional consolation. These performances reveal what’s confrontational, challenging, jolting, and disturbing in classical music, which, all too often, is heard and received as a kind of refined ambience. Renewal has been the stock-in-trade of the pianist Maurizio Pollini’s career, as he thrillingly displayed in recital at Carnegie Hall on Sunday.

Endowed with technical prowess that has made a fluffed note a newsworthy event, Pollini, who’s seventy-seven (and whose concerts I’ve been attending since 1990), displayed a new fallibility in last year’s Carnegie Hall recital. Yet he transformed his new set of circumstances into a new approach to performance that, more importantly, became the source of a new set of musical revelations. His altered style was once again on display this Sunday, in a program of pieces by Brahms, Schumann, and Chopin, and he delivered intellectual and aural shocks from the very first notes that he played. The concert began with Brahms’s Three Intermezzi, Op. 117 (from 1892), which are among the composer’s final works—ruminative, introverted pieces, all three marked andante. Yet from the start Pollini pushed the music ahead with a bracing urgency; the poetic, quietly rhapsodic aspect of the music is so pronounced that Pollini hardly needed to pronounce it. Rather, he let this quality emerge while emphasizing other unfamiliar but deeply authentic elements.

Playing a Steinway piano with modifications by Angelo Fabbrini—a relatively quiet instrument that offers crystalline, chime-like high notes along with extremely rich bass tones—Pollini extracted exotic dissonances and surprising disjunctions. Rather than smoothing out phrases into a singing line, Pollini revelled in the pieces’ obsessional elements; he emphasized repeated figures that broke the texture into juxtaposed fragments and brought out inner voices that undergirded the melodies with an intricate, condensed architectural complexity. In earlier concerts, Pollini has often played very difficult twentieth-century pieces by such composers as Stockhausen and Boulez; with these Brahms performances, he revealed the aesthetic audacity and intellectual severity of twentieth-century music in nineteenth-century garb.

If the Brahms was Pollini’s Schoenberg-for-a-day, the performance that followed, of Schumann’s Sonata No. 3 in F Minor, Op. 14 (from 1836, when the composer was twenty-six), was Pollini’s surrogate Boulez, a torrential outpouring of musical and intellectual energy, a phantasmagorical swarm and swirl that mirrors both inner turmoil and troubled times. Just as his backside hit the bench, Pollini launched into the piece’s demonic frenzy; pedalling heavily to blur uneven edges, he also removed the music’s bar lines as if lifting the gates to let notes gush out with an ominous roar. Within the fury, he emphasized Schumann’s repetitive mottoes as obsessive shards that recurred like fenceposts in a nightmare landscape. The second movement features dirgelike variations on a theme by Clara Wieck—i.e., Clara Schumann, whom Robert was barred at the time from seeing by her father (they’d eventually marry despite his objections, a situation that ended up in lawsuit and countersuit)—to which Pollini brought clenched, compressed tension. The concluding storm, the third movement, marked “as fast as possible,” pushed the first movement’s turbulence to the breaking point, conjuring the spectres of macabre romanticism and teasing fancies of solace.

After intermission, Pollini played a collection of pieces by Chopin, which took third place in the day’s revelations only because they were akin to those that he unfurled in his 2018 recital. Even so, Pollini’s performance of Chopin’s fantasy-like Polonaise in F-sharp Minor, Op. 44, captured the same hectic mania that he found in Brahms and Schumann—he played one passage, a recurring figure, with a stark absence of variety, like the apotheosis of a skipping record. In the shortest piece in the program, the Mazurka in C Minor, Op. 56, No. 3, Pollini traded its dancelike skipping rhythms for molten discord. Throughout the second half, the resonant bass notes, which Pollini’s pedalling emphasized, took on the deep, churning darkness of Rembrandt’s late paintings. (It was in the Chopin pieces that Pollini’s technique—which would still do most pianists proud—showed its wear and tear most clearly, as he occasionally snatched only hopefully at some high notes.)

Pollini certainly isn’t the only radically transformative performer on the current concert stage; other colleagues of his whom I’ve seen give such revelatory concerts include Peter Serkin, Christian Zacharias, and Beth Levin, as well as rising musicians such as Steven Beck and Johnny Gandelsman. (There are others whom I’ve only heard in recordings, such as Patrick Cohen and Sirkka-Liisa Kaakinen-Pilch.) Pollini is not alone, but he nonetheless stands apart by virtue of the longevity of his career (he first recorded in 1960, at the age of eighteen) and its prominence (he has been an international-concert artist since the nineteen-sixties and has been recording for Deutsche Grammophon since the early seventies). His elevation to the top rank of pianists is due to his astonishing technical virtuosity, which marks his concerts with an aura of patrician athleticism that, in effect, sells his intellectual rigor. Although Pollini’s celebrity is well deserved, the conservative world of classical music doesn’t make much room for other artists of similarly vast imagination.

Tuesday’s 2018 primary elections had some quiet but big wins for...