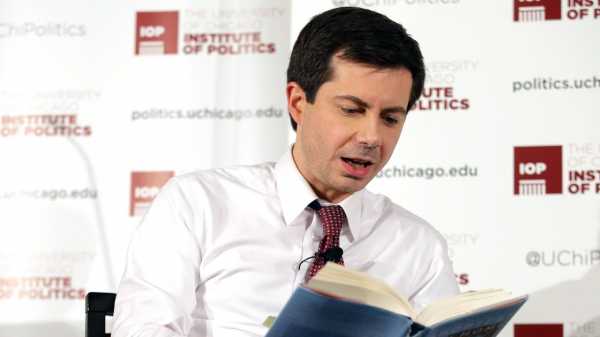 You can tell that the race for the 2020 Democratic Presidential nomination is getting serious because the candidates are talking about . . . James Joyce. Pete Buttigieg and Beto O’Rourke have gone out of their way, in interviews and public events, to embrace the Irish master; Joe Biden has been name-dropping and crypto-quoting him for years. As a Joyce scholar, I have a Google alert for the author, and the notifications typically skew plagiaristic (offering term papers on, say, Joyce’s story “Araby”). But, during the past few weeks, I have been inundated with stories from Vulture, the Irish Times, the Washington Post, Vogue, and Esquire discussing the candidates’ positions on “Ulysses” and “Finnegans Wake.”

Buttigieg’s Joyceolatry comes across as the best informed and the most authentic. I’ve known how to spell (if not how to pronounce) “Buttigieg” for a long time, because Mayor Pete’s father, Joseph A. Buttigieg, was a literary scholar who wrote a book about Joyce’s “A Portrait of the Artist as a Young Man.” Taking that volume down from my shelf the other day, I saw that Buttigieg writes in the preface that “our son Peter Paul has contributed an uncommon measure of patience and tolerance” to the writing of the book. It was published in 1987, when Pete was five—patience and tolerance were no small thing.

Pete Buttigieg’s memoir, “Shortest Way Home: One Mayor’s Challenge and a Model for America’s Future,” which was published in February, takes its title (albeit quietly) from “Ulysses.” In Chapter 13—the “Nausicäa” episode, whose rococo description of masturbation caught the attention of the New York Society for the Suppression of Vice—our twentieth-century Odysseus, Leopold Bloom, reflects, “Think you’re escaping and run into yourself. Longest way round is the shortest way home.” It was during the memoir’s publication week that Buttigieg put the U.S. electorate on notice of his congenital soft spot for Joyce. Asked by a follower to name the book that had the greatest influence on him, Buttigieg tweeted, “Ulysses by James Joyce. People view it as this inaccessible, mysterious, complicated opus… but it’s a very democratic book, about a guy going through life and the incredible depth and meaning to be found in the everyday.”

Calling the political program of “Ulysses” “democratic” is a canny move: it’s a novel that would appear to express almost equal disdain for the British imperial rule under which Dublin struggled in 1904 and for the homegrown nativist resistance that arose to overturn it (satirized in Chapter 12, “Cyclops,” in the figure of the Citizen). In a March interview for Esquire, Buttigieg explained, “Here’s why I think ‘Ulysses’ is extremely relevant. People believe ‘Ulysses’ is this complex, difficult, inscrutable text full of references. And it is a difficult text, but its subject matter couldn’t be more democratic. It’s about a guy going about his day for one day. That’s the plot of ‘Ulysses.’ And, to me, that’s what makes it very touching. You’re in this guy’s head, and you’re kind of seeing life through his eyes, and at the end through his wife’s eyes. That’s how politics ought to be, too.”

Beto O’Rourke comes to Joyce by way of Homer. Last April, he told a Texas radio interviewer that the Odyssey was “absolutely” his favorite book. He named his first child Ulysses—only, he has suggested, because he “didn’t have the balls to call him Odysseus.” That’s fine. Joyce, too, called his novel after the Latin rather than Greek name of the hero. O’Rourke’s story starts to wobble, however, when you learn that his next child, a daughter, is named Molly, seemingly referring to Leopold Bloom’s wife—she of the twenty-four-thousand-word, eight-sentence, unpunctuated soliloquy that closes the novel. And his third child, another son, is named Henry. If you’re already in a “Ulysses” state of mind, you might recall that Leopold Bloom hides behind the nom de plume Henry Flower in his epistolary flirtation with the “lady typist” Martha Clifford.

Which is it, then, for Beto—the Odyssey or “Ulysses”? Homer or Joyce? In that same interview, he talked about studying English literature at Columbia University:

With the help of a great professor, I was able to read “Ulysses” by
James Joyce, which of course is the same story [as the Odyssey],
just told in what was then modern times set in Ireland. That blew me
away and was just amazing and I think the ability to tell the stories
of our lives, what’s going on and connect with other people, that’s
part of being human.

It’s perhaps too easy to suggest that O’Rourke’s political skills are on full display. Ancients? I love ’em! Moderns? Love them, too! Here’s a man who can reach across the aisle—and across the broad syllabus of Columbia’s core curriculum.

Biden’s occasional references to Joyce over the years feel less strategic. He hasn’t been talking about Joyce as often of late—there have been other issues for him to address—though he has a habit of kicking around Joyce allusions like snuff at a wake. After seeing some of Joyce’s manuscripts in the Long Room at Trinity College, Dublin, in 2016, Biden called him “one of my favorite writers”; before that, a Democratic donor had made him a gift of a valuable signed first edition. But Biden doesn’t talk about reading Joyce, nor about what Joyce has meant to him; instead, he quotes or paraphrases him. Joyce once said that when he died, “Dublin” would be found written on his heart. Biden is fond of quoting this; sometimes he adds that “Delaware” will be found written on his. (Which doesn’t have quite the same ring to it.) Joyce’s remark, too, was a paraphrase—of Mary I: “When I am dead and opened, you shall find Calais lying in my heart.” Biden went back to the well at Ariel Sharon’s funeral, in 2014, suggesting, confusingly, that “I am absolutely sure the land of Israel, the Negev, is etched in Arik Sharon’s soul as it was written on Joyce’s heart.” Suffice it to say, he’s fond of the image.

But, given the controversy swirling around him, Biden should remember that “Ulysses” contains its own #MeToo movement, or at least moment. In the novel’s most vertiginous chapter, “Circe,” Bloom hallucinates a series of women accusing him of a wide range of forms of unwanted sexual attention. After Mrs. Bellingham and the Honourable Mrs. Mervyn Talboys have accused him of sending them obscene photographs, urging them “to defile the marriage bed” and imploring them “to soil his letter in an unspeakable manner” and “chastise him as he richly deserves,” other women within earshot take courage from their example and find their voices:

MRS BELLINGHAM: Me too.

MRS YELVERTON BARRY: Me too.

“Ulysses,” like any text, is not simply lying there waiting to be used—to be deployed, instrumentalized, paraphrased. It’s liable to fight back.

In the current political environment, name-checking the writing of James Joyce may not seem like the canniest move. It’s a dog whistle, meant to appeal to refined impulses, to élite rather than populist sympathies. How shall we put it? Joyce is a snob whistle. “Ulysses” in particular, and Joyce more broadly, have long served this function in American culture. Four years before “Ulysses” was available in the United States, The New Yorker ran a cartoon by Helen Hokinson that depicted a society matron furtively trying to obtain a copy of the famously smutty novel in Paris: “Avez-vous ‘Ulysses’?” Soon after the novel arrived Stateside, in 1934, Vanity Fair published a parody of Joyce fandom, titled “The People’s Joyce,” that promised “six socially correct remarks about James Joyce to make to your partner at a formal dinner.” The piece exploits the reader’s anxiety over not being able to master “Ulysses,” while suggesting that mastering that anxiety, rather than the novel, is all that is really necessary.

The last Presidential election alerted us to the populist power of Twitter, and demonstrated its ability to amplify lowest-common-denominator appeals—with fresh reminders of that power coming our way every week. When Joyce surfaces in the tweets of Pete and Beto, it reassures us that these guys are familiar enough, and comfortable enough, with a big, difficult book to just drop a reference, casual-like. At a moment when it’s not clear that our President has ever finished an entire “chapter book”—even the one that he ghost-wrote with Tony Schwartz—these small gestures provide comfort. They recall a time—not that long ago, really—when we were led by a sophisticated thinker, intelligent and unashamed, willing to tackle issues of great complexity without reducing them to sound bites. Twitter is Trump’s default expressive mode—more than that, one might argue, it’s the fundamental unit of his thought, and the outer limit of his attention span. And a tweet, with its two-hundred-and-eighty-character limit and predilection for oversimplification, is the very antithesis of the difficult, complex, ambiguous, ambivalent terrain of “Ulysses.”

Sourdough Bread and the Cult of Convenience