Home Culture The Popeyes Chicken Sandwich Is Here to Save America | 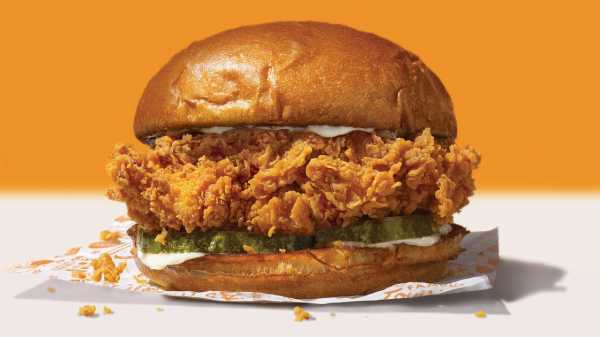 One day in 2017, during the brunch rush at Sweet Dixie Kitchen—a small Southern California restaurant that the Orange County Register once dubbed “Long Beach’s Church of Southern Breakfast”—a customer was astonished to see a member of the restaurant’s staff duck into the kitchen bearing two large orders of Popeyes fried chicken. “I wanted to believe that this was just a snack for the workers, but alas it was not,” the patron, who goes by Tyler H. on Yelp, wrote, in an account of the meal. The chicken was, instead, destined for plates of the restaurant’s thirteen-dollar entrée of chicken and waffles. When Tyler asked a server for more detail on how the dish was prepared, his suspicions were confirmed: the restaurant readily owned up to outsourcing its chicken-frying to the national chain. Kim Sanchez, the owner of Sweet Dixie Kitchen—who happened to be the Popeyes smuggler Tyler had spotted—doubled down on her decision in a response appended to Tyler’s Yelp post. “We PROUDLY SERVE Popeyes spicy tenders,” she wrote, noting that her culinary philosophy is all about sourcing ingredients from the best purveyors, whether it’s tracking down jam from an artisan in Alabama, finding fresh vegetables at the farmer’s market, or placing a takeout order for America’s best fast-food fried chicken.

After a modest media firestorm and a tsunami of jubilant consumer outrage (including, inevitably, a new Twitter hashtag, #popeyesgate), Sweet Dixie Kitchen took its Popeyes chicken off the menu, and for the past couple of years the restaurant has more or less chugged along without. That is, until earlier this month, when, for two full days, it was the only place in the world a person could get Popeyes’ newest menu item, a fried-chicken sandwich. This time, at least, the chicken was served with permission: the fast-food brand partnered with Sanchez, capitalizing on the compelling oddness of #popeyesgate. At Popeyes locations in Orange County, stores hung posters in the windows that read “Chicken Sandwich not available here, yet” and directed impatient sandwich-seekers to Sweet Dixie Kitchen. Sanchez herself starred in a peppy advertisement for the sandwich, in which she chats about her previous brush with notoriety and crouches to add the trademark symbol to a Popeyes logo drawn on the restaurant’s outdoor chalkboard.

During the throes of #popeyesgate, I found myself surprisingly sympathetic to Sanchez’s position. It’s not that I was onboard with the idea of buying one restaurant’s food to sell at another, or marking up a four-dollar combo some three hundred per cent on the secondary market merely by putting it on a stoneware plate and throwing in a waffle. But it was hard for me to find fault with Sanchez’s underlying aesthetic principle: Popeyes fried chicken is fantastic. The meat is flavorful and juicy, encased in a spiky, golden sea urchin of batter—surprisingly light, uncommonly crispy. Fried chicken is one of the world’s great culinary syntheses, found in cultures and kitchens in every patch of the planet: bird, flour, fat. American fried chicken, the recipe for which was cultivated by enslaved Africans in the South, is, at its best, a food of transcendent deliciousness, an object of near holiness. There is almost certainly better fried chicken in the world than the version found at Popeyes, but only marginally so—and, in most of the forty-nine states where Popeyes locations can be found, it’s unlikely that whatever’s better is more convenient or reliable. If you were going to try to pass off another restaurant’s fried chicken as your own, and you had a Popeyes nearby—well, you could do a whole lot worse.

The chicken sandwich that Sweet Dixie Kitchen served for that two-day tease is, as of last week, available at all 3,102 Popeyes locations in the United States. There are dozens of fast-food chains in America, débuting hundreds of new menu items each year. Of these, maybe two or three in a generation make significant inroads into our collective culinary consciousness: a McRib here, an Impossible Whopper there. Perhaps the stunt with Sweet Dixie Kitchen wasn’t even necessary: the Popeyes chicken sandwich has ascended to the pantheon in record time, not because of a catchy ad campaign or an irresistible pricing scheme but because it is, if Twitter, Instagram, and uncountable blog posts and off-the-cuff reviews are to be believed, the best goddam chicken sandwich in the world. For the last few days, my social-media feeds—which, most of the time, read like bleak, polyphonic litanies of the falling-apart world—have been overwhelmed instead by discourse about the sandwich. I’ve watched friends and strangers go through the stages of enlightenment: skepticism, curiosity, anticipation, capitulation, ecstasy. It was, specifically, the ecstasy of Nia-Raquelle Smith, a scholar and food writer in Brooklyn, that pushed me out the door and into my nearest Popeyes. “That Popeyes sandwich had me in my feelings. That’s probably the most emotion I’ve shown all year,” she tweeted, and went on to enumerate its additional virtues: “The chicken is perfectly fried! The breading isn’t falling off. You get crunch in every bite!” The bun is “a buttery cushion”; the sauce “takes it over the top. Is it healthy? NO! But dammit don’t it taste good. It’s truly a gift from the heavens.”

Like Popeyes fried chicken, the chicken sandwich comes in two versions, classic and spicy, both of which are beautifully simple. They both arrive in a foil-lined bag (the better to keep the sandwich piping hot, its optimal eating temperature). They both have the same bun—as Smith promised in her tweets, it’s buttery and sweet and light. They have the same pickles, sizable rounds of cucumber crisp with vinegar. They have the same exquisite slab of chicken breast, hefty and juicy and snow-white, in its crenellated armor of that uncommonly crisp fried batter. There’s regular mayonnaise on the classic; on the spicy sandwich, which to my mind is slightly better, the mayonnaise is spiked with cayenne. Both sandwiches stick the landing on the most important element of a fast-food sandwich: the fusion of its distinct components into an ineffable, irresistible gestalt. The salt, the fat, the sharpness, the softness—together, they’re what flavor scientists might describe as “high amplitude,” a combination so intense, and so perfectly balanced, that they meld into one another to form a new, entirely coherent whole.

This is not, as some outlets have reported, the first fried-chicken sandwich to appear on the Popeyes menu. Its chicken po’ boy, a New Orleans-inspired offering of chicken tenders dressed with pickles, lettuce, and mayonnaise on an oblong French-style roll, was introduced nationally in 2003. But it has since been discontinued, and the new sandwich has eclipsed its memory already, giving Popeyes its first serious challenge to the chicken-on-a-bun hegemony of Chick-fil-A. For some diners, put off by Chick-fil-A’s right-leaning corporate politics and widely known funding of anti-gay activism, Popeyes appeals as a chicken sandwich with less overt moral compromise. (The Advocate, the L.G.B.T.-interest magazine, ran a story about the sandwich under the headline “More Flavor, Less Homophobia.”) The brands, as is their wont these days, took the battle to Twitter: Chick-fil-A protested, oddly, that its version equals “love”; in response, Popeyes asked Chick-fil-A, “…y’all good?” Wendy’s, whose spicy-chicken sandwich really is pretty great, especially if you order it with extra pickles, jumped into the fray to assert its own poultry dominance. The rest of us can watch the mega-chains spar, jockeying for the love of some abstract ideal of a sarcastic Gen Z-er, or whoever it is they think they’re performing for. But these things aren’t decided in memes—they’re decided in mouths. Just a week after serving as the launchpad for Popeyes’ sandwich, Sweet Dixie Kitchen closed its doors—the Long Beach Post reported that Sanchez transferred ownership of the restaurant, on August 18th, and that its future is unclear. Whatever the new management team does with the space, I hope it doesn’t make the mistake of frying its own chicken.

Italy Sentences Somali Man to Over 8 Years for Plotting Terrorist...

A shrewd football fan used a betting slip to wish his...