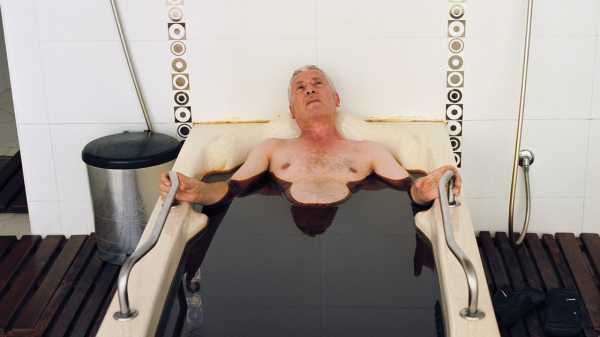 When I was a young boy, I visited the French town of Lourdes on a school trip. I was educated by the Christian Brothers, who believed that the grotto there was a miraculous site where, in 1858, the Blessed Virgin Mary appeared to a local girl. It had since become a popular pilgrimage site, as well as a place where the sick, the lame, and the unsound of mind were taken with the hope that they would be healed by the holy water that flowed from the spring. My abiding memory of Lourdes, though, is not the praying pilgrims in the thousands or the endless rosaries and outdoor masses but the sight of the small grotto itself, surrounded by discarded crutches and walking sticks. They lay in piles on the rocky ground around the spotlit statue of the Madonna, their abandonment serving as evidence of the miraculous properties of the holy spring water. 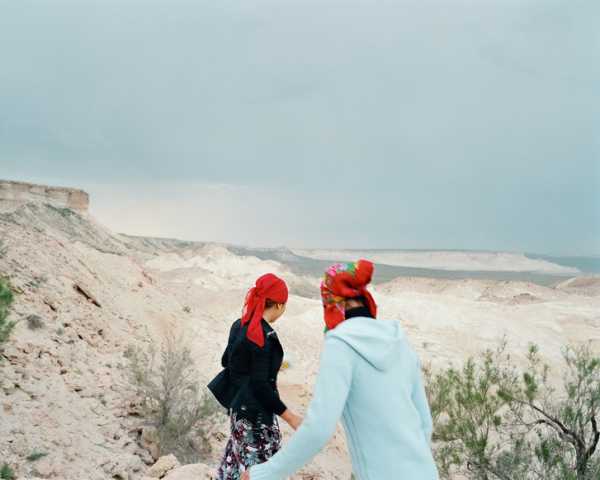 Two sisters accompany their family on a pilgrimage to pray for their uncle’s recovery, in the Mangystau region of Kazakhstan.

The memory of that trip came back to me when I first looked at Chloe Dewe Mathews’s photograph of a row of crutches and walking sticks arranged against the wall of a museum in Naftalan, Azerbaijan. Naftalan is a health-spa town rather than a religious site. But the iconography of healing, it seems, is similar the world over. People go to Naftalan to bathe in the crude oil that pours like brown sludge from overhead tanks through gurgling pipes into stained baths, hoping to benefit from its alleged healing properties. It strikes me as a kind of gritty Soviet counterpoint to the pure spring water of Lourdes. 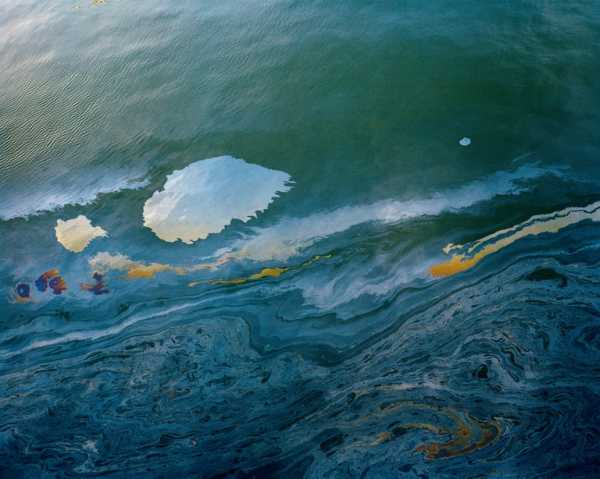 The water alongside Baku Boulevard, in Baku, Azerbaijan.

Dewe Mathews, a native of London who studied fine art before turning to documentary photography, visited the sanatoriums of Naftalan during an overland journey from China to Britain, in 2010. The landscape around the Caspian Sea, where Asia merges almost imperceptibly into Europe, is a palimpsest of history and culture, containing the traces of several empires that have risen and fallen over the centuries; the Ottomans, the Persians, the Mongols, and the Russians have come and gone. Dewe Mathews was intrigued by the contradictions that defined the region, not least the singular importance of oil and gas in the shifting economies of the countries that border the sea: Azerbaijan, Kazakhstan, Russia, Turkmenistan, and Iran. As her images progress and move outward geographically from Naftalan, a complex narrative emerges about belonging, tradition, and modernity—a story, too, about the ways in which ancient cultures and beliefs endure in a fast-changing post-Soviet culture during even the most volatile times. 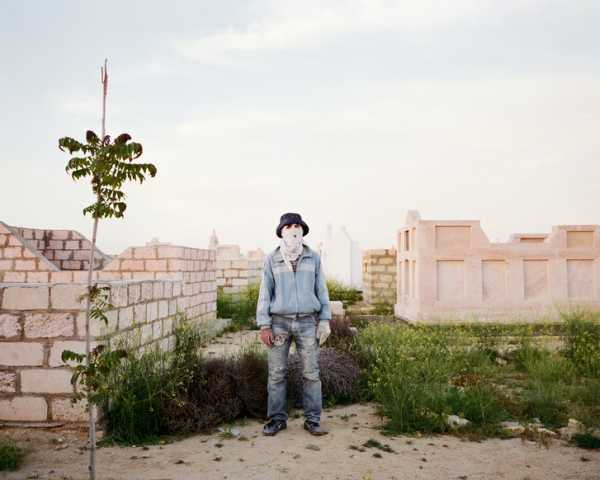 A cemetery worker in Koshkar-Ata, Kazakhstan.

The healing properties of Naftalan’s oil were praised as far back as the twelfth century, by the Azerbaijani poet Nizami Ganjavi. Marco Polo wrote in his diaries that the substance was “good for burning and as a salve for men and camels affected with itch or scab.” In 1870, a passing spice merchant abandoned his terminally sick camel there and, on his return, found that it had recovered after bathing itself regularly in a pool of Naftalan’s crude oil. German entrepreneurs at the time, having established that the oil was too heavy to be used industrially, were nevertheless sending the supposedly medicinal substance back to their homeland. 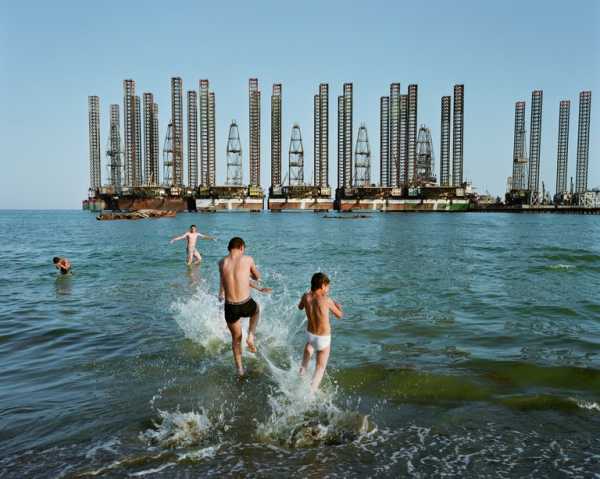 The oil rigs at Sixov Beach, on the outskirts of Baku, Azerbaijan.

By the middle of the twentieth century, news of the health-giving properties of Naftalan’s crude oil had spread beyond Azerbaijan to Russia, and seven large sanatoriums were built. At their peak, in the early nineteen-eighties, tens of thousands of people were visiting each year, many arriving from Russia on free fights provided by the Soviet government. With the collapse of the U.S.S.R., the sanatoriums fell into decline, but in recent decades they have been dramatically redeveloped, with luxury hotels and plans for an international airport to cater to the rising numbers of health pilgrims arriving from abroad. 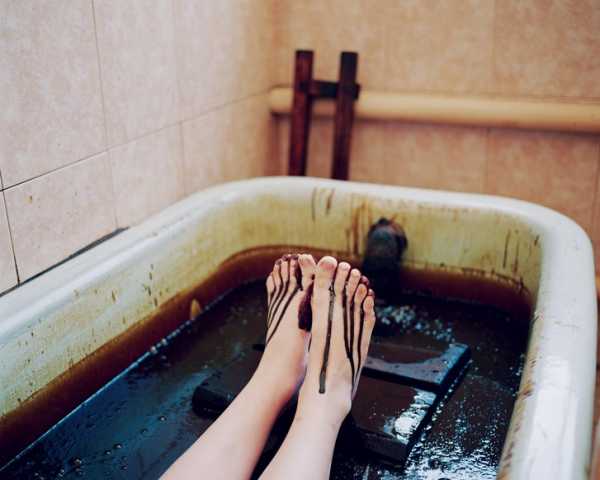 An oil bath in Naftalan, Azerbaijan. 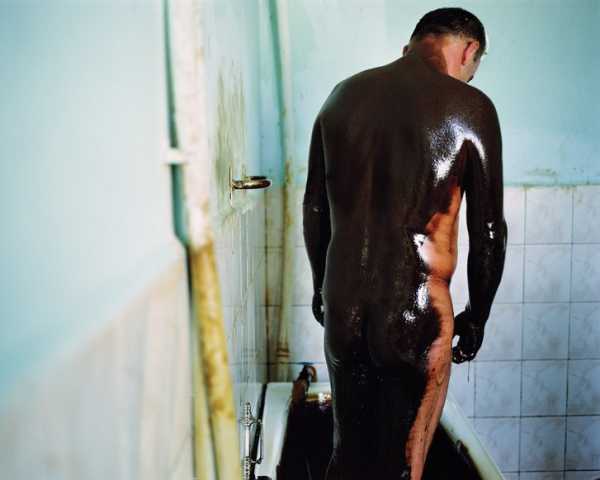 A journalist from Baku, Azerbaijan, visiting Naftalan to be treated for prostate problems. 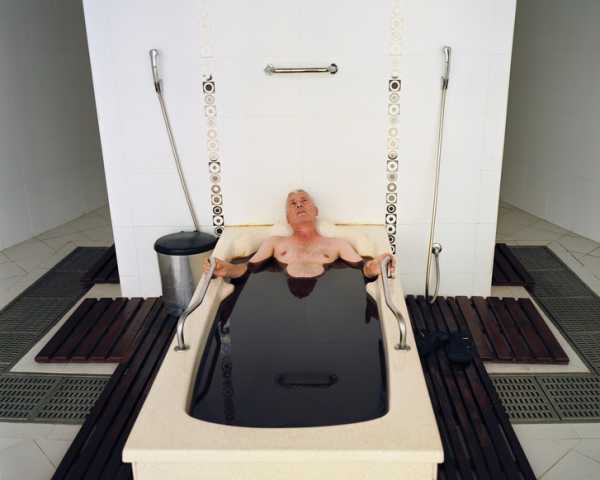 A patient at Gashalti, a luxury spa hotel in Naftalan, Azerbaijan.

On her travels through the region, Dewe Mathews encountered communities, and indeed entire states, struggling to redefine themselves after decades of Soviet rule, with oil as the precious but often divisive commodity driving the inexorable surge toward modernization. Near the port of Aktau, in Kazakhstan, for instance, she came upon a community of migrant workers from Uzbekistan whose job is to construct elaborate mausoleums for the new, oil-rich middle class. A team of ten male workers was living inside the necropolis for the summer months, sleeping beneath colorful blankets in the open air, each man earning just thirteen dollars a day. This is a landscape bleached bone white, with human figures moving through it like phantoms, in makeshift face masks and dark glasses to evade the glare of the sun. The mausoleums of Koshkar-Ata once housed the bodies of local saints, but many of the most recent tombs are engraved not with ancient religious symbols but with outlines of oil derricks. 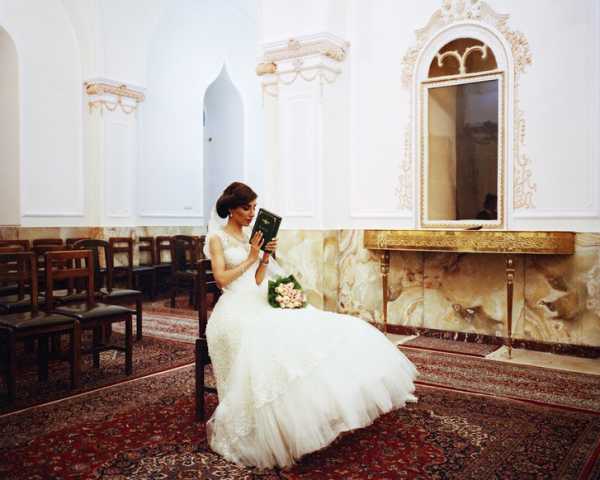 A Zoroastrian bride at the Tehran Fire Temple, in Iran.

Two images in particular suggest the complex tensions of the Caspian region. The first shows the Flame Towers, the tallest buildings in Baku, Azerbaijan, emerging from the city in their shiny, metallic symmetry. The surface of each tower is covered with countless L.E.D. screens that, when illuminated at night, give the impression of flames licking the nocturnal sky. They speak loudly of wealth, privilege, and status, much like the statement architecture that characterizes certain oil-rich Gulf states. The second image captures a spectacle that was only accidentally man-made: at Darvaza, Turkmenistan, a seventy-metre-wide hole in the earth, nicknamed “Door to Hell,” that has been ablaze since 1971. It is believed that it was created when Soviet geologists were drilling in the deserts of Turkmenistan and the sand collapsed under them; experts set fire to the escaping gas to try to burn it off. The imposing crater, emitting noxious fumes into the sky above, terrifying in its elemental beauty, is as apt a symbol as any for the fraught surge toward modernity that oil has precipitated across the Caspian region. 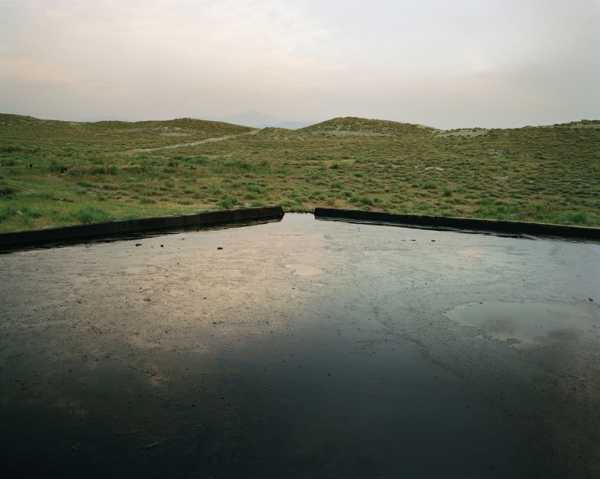 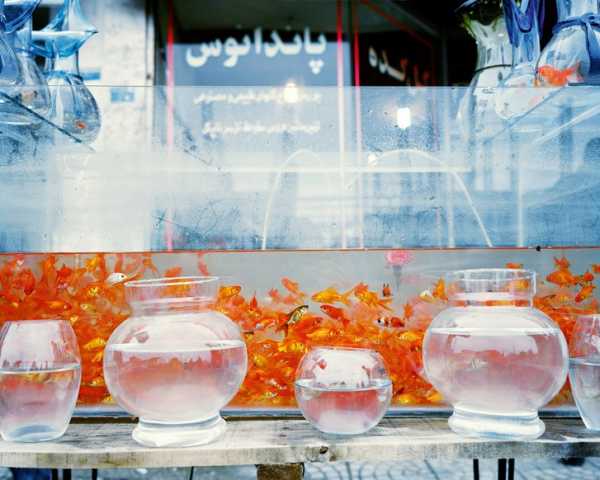 Goldfish for sale to decorate household tables for Nowruz, the Persian New Year, in Ramsar, Iran. 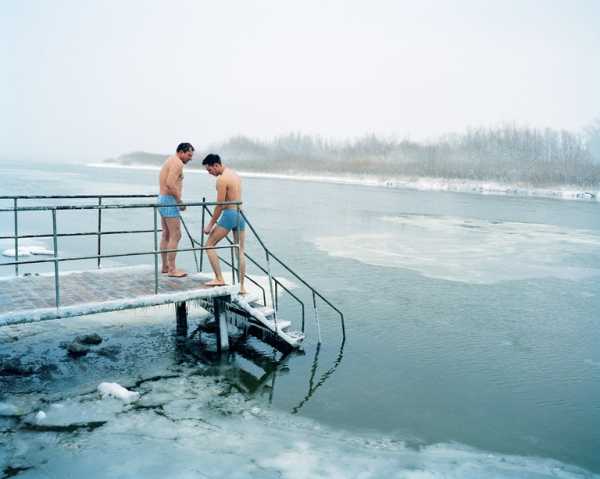 Members of the Russian Orthodox Church commemorate Christ’s baptism on the Epiphany at the Volga River, in Astrakhan, Russia. 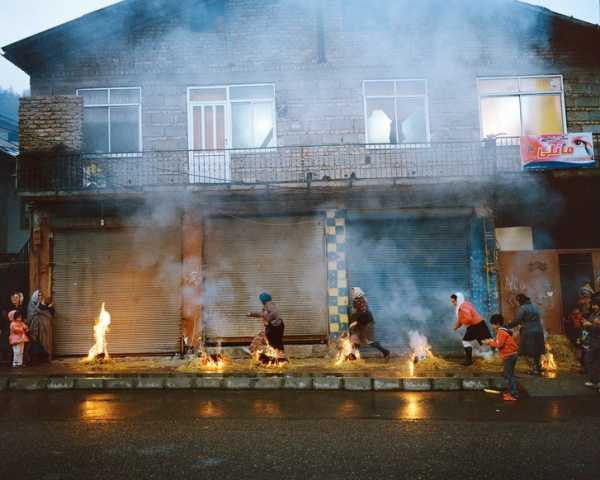 A fire festival in Ramsar, Iran. 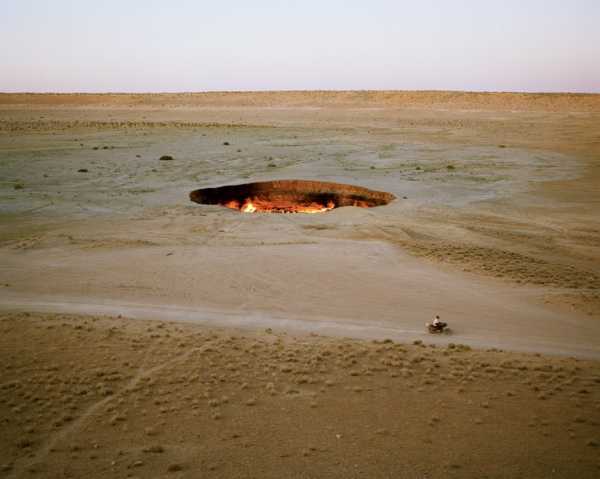 A gas crater in Darvaza, Turkmenistan.

This text was drawn from the photo collection “Caspian: The Elements,” by Chloe Dewe Mathews, which is forthcoming from Aperture and Peabody Museum Press.

An Unnamed Girl, a Speculative History |