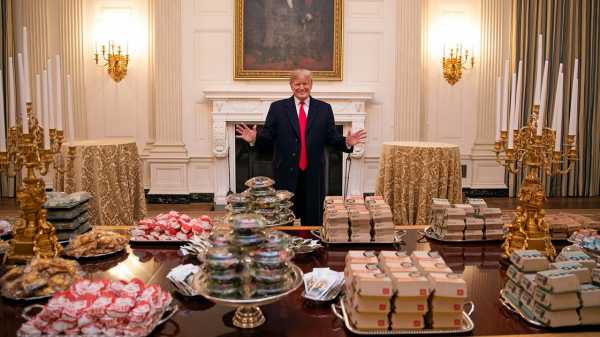 “I think we’re going to serve McDonald’s, Wendy’s, Burger King, with some pizza,” Donald Trump told the press in an interview on Monday morning, discussing the White House’s planned banquet that night for the Clemson University Tigers, in celebration of their victory in this year’s N.C.A.A. football championship. “I really mean it. It will be interesting. And I would think that’s their favorite food. So we’ll see what happens.” As with so many Trump promises, it could have been just a gust of wind. So it was something of a surprise—a small, mild surprise, like a sudden itch on the sole of your foot—when, on Monday night, the photos began to roll out of Trump grinning behind a mahogany dining table arranged with silver trays bearing stacked boxes of Filet-o-Fishes and Quarter Pounders, and McNuggets, and a few dozen of something in paper wrappers from Wendy’s, and piles of anonymous-looking salads, and a couple of pizzas, and Burger King fries that some hapless aides had decanted into paper cups bearing the Presidential seal.

Far be it from me to defend any of Trump’s choices, but serving a meal of fast food at a fancy gathering is not inherently a bad idea. In fact, it can be wonderful. A few dozen wings and thighs from Popeyes or a Chick-fil-A nugget tray make for a festive dinner-party centerpiece. Shake Shack-catered weddings are all over Pinterest. No less glittery an event than the Vanity Fair Oscar party has served In-N-Out burgers to its throngs of the gorgeous and powerful. There is, at many of these occasions, an element of class-based pantomime—for guests invited to eat fast-food burgers in a designer dress, it’s the fast food that is presented as a novelty, not the couture. But the culinary pleasures are real: fried chicken, famously, only gets more delicious as it cools down, and, if you hire In-N-Out and Shake Shack to do the catering at your event, they show up in person and sling their burgers fresh.

Trump’s bulk order, on the other hand, was a dinner fighting against the odds. One imagines those poor sandwiches steaming limply inside their cardboard boxes on the drive to the White House, and during the fuss over arranging them on their silver platters (with sauces sorted by type and piled high in silver gravy boats) and properly lighting the gilded candelabra. Then came the photo shoot: Trump, centered beneath a portrait of Abraham Lincoln, flinging his arms out behind this table of quick-serve abundance, in a gesture that’s equal parts ownership and invitation. There is a particular awfulness to McDonald’s or Burger King once it’s gone cold. By the time America’s greatest collegiate football players arrived, in their navy blazers and Sunday shoes, to pick up porcelain plates and work their way through this cardboard buffet, the French fries would have grown cold and mealy, the burger buns soggy, the precise half slice of American cheese on each Filet-o-Fish sandwich hardened to a tough, flavorless rectangle of yellow.

Trump’s affinity for fast food has been well documented since the earliest days of his public life. In the nineties and early two-thousands, he filmed commercials for Pizza Hut and McDonald’s. On the campaign trail, at a televised CNN town hall, he explained to Anderson Cooper that he enjoyed “a fish delight,” referring to the Filet-o-Fish. He continued, “The Big Macs are great. The Quarter Pounder. It’s great stuff.” Trump seemed to relish posing with fast food, especially the winking high-low of Instagram photos of himself eating value meals on his private plane: here’s Donald Trump grinning with a bucket of K.F.C., there’s Donald Trump grinning with a Big Mac and a cardboard sleeve of fries. His former campaign manager Corey Lewandowski wrote, in “Let Trump Be Trump,” his book chronicling the campaign, that “on Trump Force One there were four major food groups: McDonald’s, Kentucky Fried Chicken, pizza, and Diet Coke,” and that his boss’s go-to McDonald’s order was two Big Macs, two Filet-o-Fishes, and a chocolate milkshake. (After a horrified outcry, Lewandowski clarified that the 2,630-calorie meal is more healthful than it appears, because Trump makes a point of removing the buns.) After taking office, according to a Politico report, Trump reportedly preferred a McDonald’s Quarter Pounder with cheese (lots of ketchup, no pickles) to the White House kitchen staff’s iteration.

Trump, in typical form, spun Monday’s catering as ultimately the fault of his political opponents, an inevitable result of his own elective government shutdown, which has left hundreds of thousands of federal employees furloughed—including, presumably, the White House kitchen staff. Trump, a purported billionaire, made a big deal out of the fact that he paid for the fast food out of his own pocket. But we might wonder if there is also something more pure in his decision to bring in a drive-through feast for the history books: an attempt, however opportunistic, for a man who loves fast food to fulfill his straightforward desires—a gilded hall filled with as many fried and griddled patties as money can buy, more Filet-o-Fishes and Quarter Pounders than one body could possibly consume, the teetering towers a quantifiable testament to his Presidential power. “We went out and we ordered American fast food, paid for by me,” Trump boasted to the reporters gathered before the fast-food spread, grinning his fast-food grin beneath a brooding portrait of Abraham Lincoln, painted in 1869, by George Peter Alexander Healy, and praised by Lincoln’s eldest son as the greatest likeness ever captured of the man. “Lots of hamburgers, lots of pizza. Three hundred hamburgers. Many, many French fries.”

Trump says he is ‘totally opposed to domestic violence’

Trump’s lawyer says he paid off Stormy Daniels with his own...