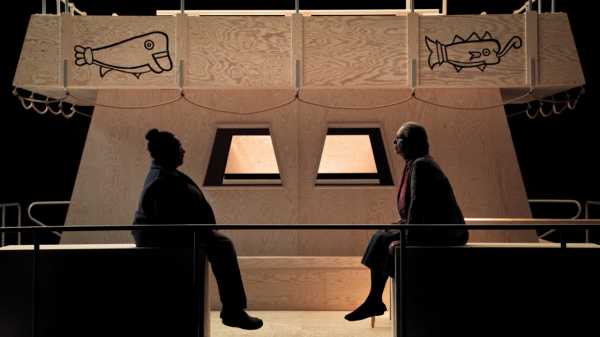 In 1969, the philosopher Hannah Arendt wrote of the abysmal disinterest of scientists or intellectuals in violence as a subject of serious study, “No one questions or examines what is obvious to all.” She was writing during one of the more potholed stretches in human history, with violence and assassination having become a political weapon, deployed in the spaces between the larger, tectonic frictions of the Cold War. The rise of television had made these sporadic occurrences of violence feel universal. It would take an eccentric, an academic with an extreme persona, to look closer at what was hanging in the air.

Three years after Arendt’s baffled pronouncement, a Mexican anthropologist named Santiago Genovés took up the cause. A veteran of multiple long-distance rafting experiments (a thing in the nineteen-seventies, apparently), the fifty-year-old researcher devised an experiment fit for the extremities of the era. With four men and six women, he’d set sail on a boxy steel raft with no motor across the Atlantic Ocean, to better observe human conflict, which, he believed, was guaranteed to spark under these mind-bending conditions. On the raft, the nature of violence could be measured in the sterile confines of his floating behavioral laboratory. “Is violence something that is built into our genes?” Genovés wrote once the raft was at sea, “Or is it something that we learn? Will an isolated group of people on a raft cooperate to survive?”

Except that the conflict, as Genovés planned it, never flared up. Surprising when you consider that he engineered the raft, named Acali, after the Nahutal word for “the house on the water,” to be a floating tinder box. The crew members, selected partially on the basis of their sex appeal, spent more time fending off seasickness than fornicating. So much for sexual jealousy. As for emasculation, the men, who were relegated to menial roles on the ship, willingly followed the commands of their capable female captain. The crew was banned from bringing books; they passed the time singing songs and swapping stories, unperturbed by multiple language barriers (another hindrance arranged by Genovés) and the grind of daily psychological exams. In spite of this, and despite three near sinkings, two broken rudders, one case of appendicitis, and near collisions with a storm and a seventeen-thousand-ton oil tanker, the Acali peacefully reached its destination, a hundred and one days after setting sail, in Cozumel, Mexico, with nothing aberrant to report except for an extremely tanned crew. So why, more than forty years later, was the story of this experiment, and its hard-earned conclusions on violence, power, and human behavior, seemingly still lost at sea?

In “The Raft,” a new documentary by Marcus Lindeen, the surviving volunteers of this experiment are gathered to set off on a psychological search expedition for any possible answers to the question. Lindeen, a Swedish filmmaker and theatre director with a fascination for radical journeys, built his own Acali from plywood, meticulously crafted to scale on a studio soundstage. The documentary itself is as artistically ambitious as Genovés’s own experimental design—16-mm. footage of the original voyage is given a lush oceanic backing track, intercut with archival photos, news footage, and sparsely lit interviews of the now-wrinkled volunteers, as they venture to make sense of the study, and its effects on their lives, so many years later. Lindeen steers viewers toward an impression of science’s inability to reckon with the obviousness of human nature, good or bad. But, in restaging the saga, and by pressing the crew once more into subjects, “The Raft” reveals a different truth: no matter how well-intentioned an experiment, or documentary, the power dynamics that shape these undertakings taint the potential of their results—or, as was the case with Genovés’s audacious experiment, leaves them misunderstood, and mocked, by the outside world.

The most glaring example of this comes quickly in the film. What Genovés’s referred to as his “Peace Project,” viewers learn, was rather immediately dubbed the “Sex Raft” by the press, who made headline hay of the study’s supplementary examination of “sexual behaviour.” A U.P.I. cable announcing the Acali’s arrival in Mexico leeringly described its crew as “bare-chested men and bikini-clad women” on a craft “skippered by a buxom Swedish blonde.” (The label is proving even more potent in the digital age, as neither the film’s marketing nor recent reviews can resist its click-bait appeal.) Unfortunately for Genovés, the crude designation became the public’s primary reference to the study. In a paper, published in 1977, he estimated that eighty per cent of the questions he received about the experiment were sexually oriented. Genovés’s researchers back on land tracked the media’s repeated references to free love and group sex on the raft and noted their outsized influence in how the volunteers’ families perceived the experiment. Even Genovés’s home institution, the National Autonomous University of Mexico, came to distance itself from its student, a fact he learned mid-voyage over a radio broadcast.

The stigma faced by the “Peace Project” recalls other bold-lettered group experiments of the era, such as the Stanford Prison Experiment. Though entirely lacking in sex appeal, or sunshine for that matter, the infamous 1971 group experiment is also known for all the wrong reasons, specifically, man’s supposed predilection for violent domination, and not, as Maria Konnikova noted in an essay for this magazine, the influence of a prison environment on human behavior. Like that study’s lead researcher, Philip Zimbardo, Genovés’s own outsized presence on the Acali took on authoritarian tendencies as he attempted to produce conflict and preserve his experiment. He relieved the captain, Maria Björnstam, of her duties when she insisted on pulling into port to avoid a storm. Disappointed by the lack of sexual jealousy, Genovés began to play “the game of truth,” where he read aloud the crew’s sexual appetites as a means to inspire an emotional response. Mary Gidley, one of two Americans on the raft, claims that Genovés, unprovoked, threw a bucket of water in her face. “It was like a shock treatment,” she says, as Lindeen blows a high-powered fan in her face for effect. “Maybe he was trying to see what he could get away with.”

What these methods inspired turned out to be a near mutiny. Genovés proved to be an inept captain after panicking during a near-collision with an oil tanker. The crew quickly reinstalled Björnstam at the helm, and the macho Spaniard effectively resigned himself to the cabin. Lindeen turns this into the narrative crest of the film, as it should be. The cunning, resilient maneuvers of the crew, the women specifically, prevented major conflict, or accidental death. Even at their most abused state, the crew’s worst impulses are kept in check. The raft’s other American, Fé Seymour, tells of her fantasy to murder Genovés, whom she accuses of racist antagonism. (She was one of two black crew members on the raft.) The conflict that Genovés had been agitating for during the original experiment managed to slip by, unbeknownst to him, then and now. (He died in 2013, before the documentary began production.) Seymour’s own personal conclusions serve as the film’s sole answer to Genovés’s question of violence. “Isn’t love the answer to violence?” Seymour asks. “We had it on the Raft . . . [Genovés] was so focussed on the violence and conflict, but [the answer] was right in his hands.”

Yet it’s debatable whether Genovés felt this way. Even though the film provides clear evidence that his thinking evolved toward Seymour’s conclusion, that humans tended to exhibit coöperation, Lindeen denies Genovés such absolution. Following Genovés’s removal from activity on the raft, he wrote in his diary: “Only one has shown any kind of aggression and that is me, a man trying to control everyone else, including himself.” For the first time since childhood, Genovés claimed, he cried. One wonders if Lindeen would rather viewers leave with his own narrow conclusions than those of a scientist who, against type, likely learned from his misguided methods. In Genovés’s case, this meant dedicating the remainder of his academic life to affirming that violence was not an innate human tendency. As it turns out, the man who brought us the so-called sex raft was even nominated for a Nobel Peace Prize, in 1981. Genovés would become the central author of “The Seville Statement on Violence,” a 1986 paper signed by twenty scientists from around the world, in what was the first global pronouncement to reject “biological pessimism.” Even Arendt was certain of man’s genetic lust for violence, not to mention Freud, Spinoza, and St. Augustine. “The same species who invented war,” the statement says, “is capable of inventing peace. The responsibility lies with each of us.”

As we learn in the documentary, the architect of an experiment can easily, even unwittingly, become its subject just the same. In the case of “The Raft,” the same distortions afflicting Genovés’s experiment—hubris, sensationalism, power, and manipulation—obscure Lindeen’s own message. Viewing the film, its unclear if he hoped to correct the experiment’s rampant mischaracterizations, deliver a gawking tribute to a far-out science project (the kind of retrospective made with numbing frequency in the streaming-content era), or offer a welcome feminist rebuke to patriarchal science. At times, it appears to be all three. It seems that Lindeen, only in retrospect, away from his own model Acali and the power he held over it, was able to interpret the results with clear eyes. In a recent essay, he recounts how a crewmember had jokingly referred to him as “Santiago No. 2” during production. A personal breakthrough came in waves: “I had built an enormous raft, just like him. I had raised the funds and gathered people from all over the world to get onboard the raft, just like him. And just like he wanted his participants to behave a certain way for his experiment, all those years ago, I now was trying to manipulate the exact same people to perform a certain way for my film. I had turned into the nemesis of my own movie.” It would seem that the raft still has lessons to teach.

Watch: Tracey Kennedy on how the GAA helped her through ‘traumatic’...

President Trump says he can pardon himself. We asked 15 experts...

The Lifespan of a Photographer’s Marriage, One Portrait of His Partner...