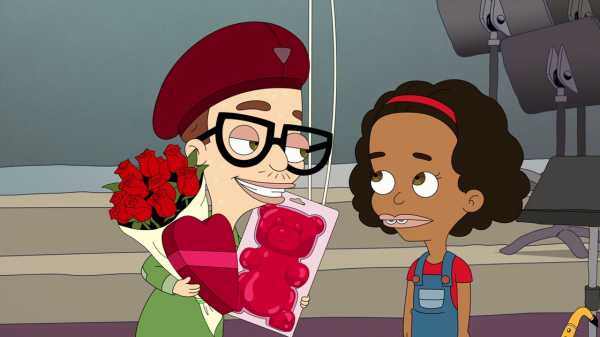 I swear I don’t mean this as a cry for help, but, in the days leading up to the airing, on Netflix, of “My Furry Valentine,” the Valentine’s Day special of “Big Mouth,” the great animated comedy about a group of neurotic, middle-class, suburban teens struggling through puberty, I found myself thinking more than once: Now I have something to live for. Of course, this was an exaggeration; my life actually has a lot to recommend it besides surprise-drop streaming specials. But it’s nevertheless the case that February is one of the more trying months of the year: it’s grim and gray and cold outside, the demands of work seem relentless, and the fading memory of Christmas vacation and the too-distant promise of spring feel like cruel jokes. We could all probably stand to watch something that is simultaneously disgusting, hilarious, honest, and moving. Thank goodness, then, for this double-length “Big Mouth” episode, which focusses on what is, for many, the worst day of this bad month.

“My Furry Valentine” begins where the second season of “Big Mouth,” released last October, left off. The action is staged in the course of a single day (in this case, a day in which the commercially motivated promise of reciprocated affection often meets with crushing disappointment), and this intensifies the stakes for the show’s sometimes miserable, often confused, and always horny adolescent characters. The perennially hopeful but usually thwarted Andrew adopts a nineties-smooth-jazz-man patter and a burgundy Kangol to try to win back his lost love, Missy. (His Valentine’s Day card to her reads, “Your move, Mama.”) Nick, having been shunned by the buxom Gina, can’t find the energy to wriggle free of the grasp of his loving but suffocating parents, and he’s becoming increasingly preoccupied by his suddenly sensitive nipples. Jessi chafes against the fact that her mother is having a hot lesbian affair with Dina, their temple’s cantor, and develops a platonic romance with Matthew, the only out gay kid in the school. And Jay continues his journey to become a so-called ultimate fuck machine by jerking off endlessly into both Suzette, a bimbo-ish bed pillow, and Brad, a masc couch cushion.

“Big Mouth” isn’t just a fun show but a significant one. Its focus on the embarrassments of sex—the mechanics of jerking off, the terrors of overhearing the goings-on in your parents’ bedroom, the suprisingly stinky body odors, the sudden boners—doesn’t only work in the service of gross-out laughs (though it certainly does that) but also seeks to chip away at shame. When Nick, driven to the brink by his throbbing nipples, lashes out at his “hormone monster,” the hirsute Connie—who, along with her counterpart, Maury, represents the kids’ haywire physiological and psychological urges—she accuses him of rejecting puberty and trying to remain a kid. “You want to fuck your mom, and you want to give your daddy a B.J.!” she yells. For all of the moment’s vulgarity, I’ve rarely heard such a straightforward expression on television of how confusing it is to leave childhood behind and develop into a sexual adult within the family unit.

Connie and Maury’s chaotic interventions are figured as a form of care. “You look insanely good, like Billy Crystal at a Clippers game,” Maury tells Andrew, generously, after he puts on his distressing Kangol. But the hormone monsters also give voice to their charges’ deep worries. In the final scene of the episode, in an allusion to the familiar trope from “When Harry Met Sally”—in which longtime real-life couples explain how they met and what has kept them together—Connie and Nick are seen being interviewed, sitting on a couch. “However it happened, it happened. It’s still new,” Nick says. “It can be hard,” Connie concedes, and Nick chides her: “C’mon, it’s not that hard! We have fun!” “Yeah, we’re fucking with his parents big time,” Connie reveals. “I’m putting the milk back in the fridge with, like, nothing in it,” Nick says, and the two laugh. “Yeah, we’re having a goooood time,” Connie croons, her paw on Nick’s hand. Then, suddenly, she grows sombre, pulling away. “But it’s hard,” she says, as Nick turns to her, stricken. This space, in which a good time blurs with a hard time, is exactly where “Big Mouth” resides.

After weight loss surgery, relationships might change as much as weight:...

The Legacy of Robert Evans, a Vexing Hollywood Legend |