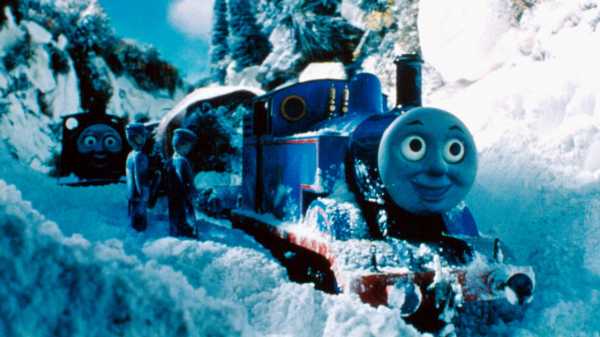 When I was a child, I could spend all day at Shining Time Station, the
fictive train depot with its own eponymous TV show, where Thomas the
Tank Engine and all his plate-faced locomotive friends worked and lived.
To my undeveloped brain, each episode seemed like a
beautiful daydream, in which an orderly, magical, trance-inducing
universe ticked on under bluebird skies. For company, there was the
Conductor, voiced first by Ringo Starr and later by George Carlin, and
then the trains: gentle blue Edward, moody green Henry, big strong
Gordon, little red James, and, of course, Thomas, with his pointed
eyebrows and perpetual smile. The show, which included segments that had
first aired on a British show called “Thomas & Friends,” began airing on
PBS in 1989, and each episode opened with a Joe Cocker-ish theme song:
“Reach for the steam, reach for the whistle, go where the railway runs/
Reach for the words, reach for the story, follow the rainbow sun.” I
would hum along. How could I possibly have imagined that, decades later,
I would get lost in obscure corners of the Internet where people
interpret the show—at length—as a depiction of a premodern
corporate-totalitarian dystopia?

If you have watched the series and not encountered such readings of it,
you may assume that these interpretations are ridiculous. In that case,
you should spend four minutes with “The Sad Story of
Henry,” a segment from
“Thomas & Friends” that aired on the second episode of the first season
at PBS. (In the U.S., it was retitled “Come Out, Henry!”) It begins on a
drizzly day in Sodor, the fictional island in the Irish Sea that serves
as the show’s setting. Henry, the curmudgeonly train, is afraid to come
out of his tunnel, because “the rain will ruin my lovely green paint and
red stripes.” Then Sir Topham Hatt, the railway director, who is also
known as the Fat Controller, arrives on the scene. (He looks like
Monopoly’s Rich Uncle Pennybags but with eyes that have almost surely witnessed
murder.)
The Fat Controller orders the passengers to pull Henry out with a rope,
but Henry won’t budge. They push him from the other direction, to no
avail. (The Fat Controller declines to physically participate in this
effort, citing “doctor’s orders.”) The passengers then tell Henry that
it’s not raining; Henry, perhaps noticing that everyone still has their
umbrellas out, refuses to move.

Realizing that the day’s workflow is irrevocably disrupted, Fat
Controller decides that Henry must be punished—for life. “We shall
take away your rails, and leave you here for always and always,” he
tells Henry. As Henry’s face contorts into anguish and the background
music toots a series of Oompa Loompa faux-glum flourishes, railway
employees build a brick prison around Henry, leaving only half of his
face visible. His train friends pass by: one snubs him, and another
whistles hello. Henry has no steam left to whistle back. He spends his
days alone, soot-streaked, wondering if he’ll ever be allowed to go back
to work. The last line of the segment is the narrator saying, “I think he
deserved his punishment, don’t you?” In the U.S. version, this
voice-over is tweaked so that Henry’s fate seems temporary. But the
original version is still on YouTube, and it’s comically bleak. As one
commenter writes, “What moral lesson are kids supposed to learn from
this? Do as you’re told or you will be entombed forever in the darkness
to die?”

The Thomas the Tank Engine universe was the brainchild of an Anglican
minister, the Reverend Wilbert Awdry, who in 1942 began spinning stories
about trains to amuse his son Christopher, who had come down with the
measles. The first volume in Awdry’s “The Railway Series” was published
in 1945. Awdry wrote twenty-six more books, the last one in 1972; after
his father’s death, Christopher wrote sixteen more. Episodes of “Shining
Time Station” are mostly faithful adaptations of “The Railway Series,”
though Awdry’s plots are embellished onscreen with a colorful crew of additional
human characters and the impish aesthetic courtesy of the set designer,
Wayne
White,
who also worked on “Pee-Wee’s Playhouse.” When I watched “Shining Time
Station,” I was too young and too absorbed by the fever-dream visual
textures to take in anything that was actually happening. But through
the dedicated and comprehensive Thomas the Tank Engine
Wikia, as well as a
smattering of critical
assessments and message-board
threads from dedicated
viewers, I have
become a little obsessed with the show’s repressive, authoritarian soul.

It is clear from his work that Awdry disliked change, venerated order,
and craved the administration of punishment. Henry wasn’t the only train
to receive a death sentence. In one episode, a manager tells a showoff
engine named Smudger that he’s going to “make him useful at last,” and
then turns Smudger into a
generator, never to move
again. (There are several “R.I.P. Smudger” tribute
videos on YouTube.) In
another episode, a double-decker bus named Bulgy comes to the station
and talks about revolution—“Free the roads from railway tyranny!” he
cries. He is quickly labelled a “scarlet deceiver,” trapped under a
bridge, and turned into a henhouse. A recurring storyline involves the
“troublesome trucks,”
which are disciplined into fearful obedience through public, symbolic
punishments. Their leader, S. C.
Ruffey, is pulled in two
different directions until he breaks into
pieces—“I guess the lesson
is that if someone is bullying you, kill them?” a YouTube commenter
writes—and, in another episode, a “spiteful” brake van is crushed into
bits.

By the time Awdry wrote “The Railway Series,” the railway industry had
shifted away from steam and toward diesel and electric. But on the
Island of Sodor steam locomotives are permanently on top. The caste
system is very rigid. There is one diesel engine, a black train known
just as “Diesel,” who struggles to prove that he’s as useful as the
steam trains. Less useful than Diesel are the female passenger coaches
named Annie and Clarabel, who are awarded to Thomas as
prizes after he helps with
a train breakdown. (More information on the class and gender hierarchy
of Thomas the Tank Engine can be found in “A Very Useful Engine: The
Politics of Thomas and
Friends,”
a 2009 article by Shauna Wilton, a professor at the University of
Alberta.)

On Sodor, the steam trains engage in constant competition for big jobs,
more work, and the Fat Controller’s approval. Anthropomorphized trains
in literature tend to be hard workers, but one Tumblr thread holds that
Thomas and friends have other motivations. The show “canonically takes
place in a train
post-apocalypse where the Island of Sodor is the only safe zone in a totalitarian
dystopia in which steam trains are routinely killed and their body parts
are sold or cannibalized for repair,” a Tumblr user named
frog-and-toad-are-friends argues, citing one of Awdry’s books, “Stepney
the ‘Bluebell’
Engine.”
In that book, a green train named Percy expresses his fear of the “Other
Railway,” which is what British Railways, the United Kingdom’s
nationalized rail company, is called on Sodor: “ ‘Engines on the Other
Railway aren’t safe now. Their controllers are cruel.
They don’t like engines anymore. They put them on cold damp sidings, and
then,’ Percy nearly sobbed, ‘they . . . they c-c-cut them up.’ ” (The accompanying
illustration features two terrified trains facing dismemberment, and,
behind them, a train with a chilling black void where its face used to
be.)
Another Tumblr user replies, “Maybe that’s just what Railway Management
wants the engines to think.” And, in fact, it does seem that the Fat
Controller maintains authoritarian rule through disinformation. In the
foreword to the book, Awdry clarifies that British Railways actually
supports the preservation of steam engines. It’s just a little joke that
Percy fears for his life! (If you need some cheering up after this
investigation, I recommend “Goths Rave to Thomas the Tank
Engine,” a mashup that
makes use of the show’s iconic transition music and has accumulated more
than three million views.)

Though “Shining Time Station” ended in the nineties, Thomas the Tank
Engine shows have aired almost continuously since. “Thomas & Friends”
has gone on in some form for twenty seasons, two of which featured Alec
Baldwin as the narrator. In 2009, the show went completely C.G.I. In
2014, the actor who had voiced Thomas for the previous five years quit,
saying that the successful show was exploiting him by paying “a very
low
wage.”
The trains seem overdue for a similar revolution.

Pete Buttigieg has gone from totally unknown to polling third in...

Jack Wilshere willing to move away from Premier League after leaving...