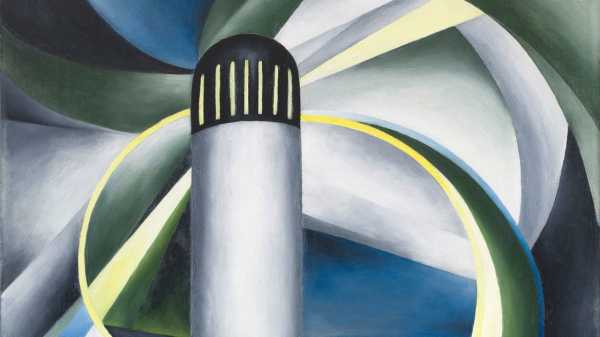 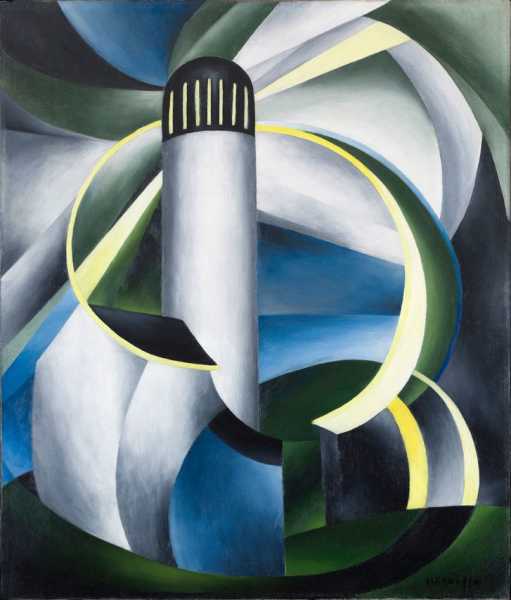 Ida O’Keeffe’s “Variation on a Lighthouse Theme IV” is part of the series in which the painter moved into territory uninhabited by her famous sister.

What if you were Georgia O’Keeffe’s sister, and you wanted to be an artist? Could you empty your mind of her work to create your own original images? A show at the Clark, in Williamstown, Massachusetts, tries, sort of, to separate the sisters, though the title gives away the game: “Ida O’Keeffe: Escaping Georgia’s Shadow.”

Georgia was only two years older than Ida, but they were light-years apart in their characters. Georgia headed straight into her career, like a diver going off the high board. She went to the Art Institute of Chicago, the Art Students League in New York, and Teachers College, at Columbia. She studied technique, perspective, shading, charcoal, oils, watercolor, the virtuoso brushstroke of William Merritt Chase—the craft and mechanics. She plunged into new philosophies and new ideas, swimming in the radical currents of the first decades of the twentieth century. When she left New York, for a women’s college in South Carolina, she took with her the new ideas and her own fervor. During the Christmas holiday of 1915, she—isolated, intent—created a series of abstract drawings that was the first to define her as an artist. A friend showed the drawings to Alfred Stieglitz, the art dealer and photographer at the center of the New York art world. Famously, he said, “At last, a woman on paper.” Georgia had known Stieglitz through his gallery, but Stieglitz had never been aware of her until that moment. He met her through her work: it was that which gave Georgia O’Keeffe gravitas and importance.

By contrast, Ida was dilatory and undecided. Like her other sisters, she took art lessons in school; afterward, she took drawing classes. By 1913, she was teaching drawing at elementary schools in Virginia, but, in 1918, she changed careers. She moved to New York to get a degree in nursing. The O’Keeffe sisters were close, and Ida saw Georgia often. Stieglitz, now Georgia’s husband and dealer, took to Ida. He tried for a flirtation, but Ida sensibly insisted on friendship. In the company of artists, in 1925, Ida decided to become a painter, though still supported herself as a nurse.

An artist’s life requires discipline and intention: if she doesn’t believe in herself, no one will. Her work must be paramount in her daily life. She must find her ideas urgently compelling, because she must convince the world of their importance. By 1925, Georgia had been living with that urgency and discipline for nearly twenty years; Ida never had her sister’s steely commitment. In Ida’s nursing school, the superintendent of nurses noted that she “will never make a well-balanced leader. Will work best under direction.” Perhaps Ida found direction in her sister’s work. In 1927, Georgia curated a show at the Opportunity Gallery in Manhattan, including works by Ida. Two of these works were still-lifes of magnified flowers and fruit, done with a smooth, immaculate brushstroke. Although Ida would often show her work under her middle name, Ten Eyck, everyone knew who she was: an O’Keeffe.

In 1931, Ida continued her advanced studio work at Columbia Teachers College, where she studied under Charles Martin. He taught the theory of dynamic symmetry, in which geometric lines are superimposed on realistic shapes to produce architectonic images. These allude to classical prototypes of harmony. Under this influence, Ida produced a series of lighthouse paintings. These are semi-abstract, composed of geometric lines and curves, using a limited palette. The best are clean and powerful—austere images that use contrasting beams of light and shadow to create powerful, brooding compositions. They are unrelated to Georgia’s work, and Ida steps forth boldly as herself. But other contemporary works by Ida vividly recall her famous sister—a magnified mushroom, a carved Native American pipe, and a smooth-barked tree against low mountains. The radiant, simplified forms, the luscious paint, and the subjects all suggest Georgia. 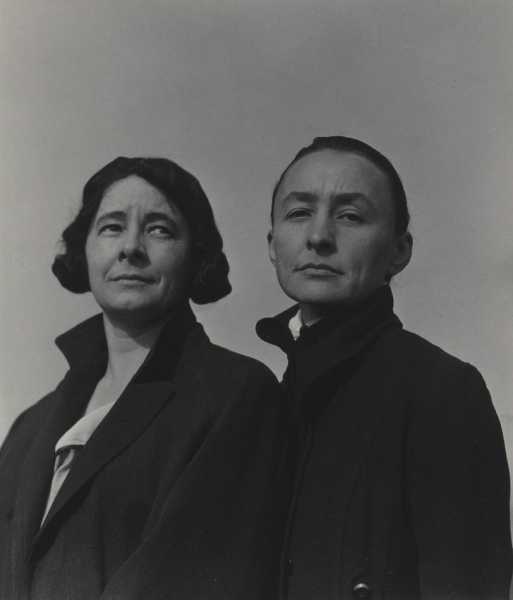 The sisters Ida and Georgia O’Keeffe in 1924.

Photograph by Alfred Stieglitz / © Board of Trustees, National Gallery of Art, Washington, D.C.

In late 1932, the Delphic Studios in New York showed work by some of the O’Keeffe women: Georgia’s younger sister Catherine, and their grandmothers. Catherine was a gifted amateur who’d started painting with Georgia in Wisconsin, in 1928. She, too, followed in her sister’s footsteps, rendering Georgia’s subjects in Georgia’s style—lush, magnified flowers in dreamlike colors. In March, 1933, Delphic showed a few of Catherine’s paintings, and in April the studio gave Ida a solo show. With her lighthouse paintings, Ida had moved with assurance into territory uninhabited by her famous sister. Georgia had painted stylized architectonic forms, but never using the vocabulary of dynamic symmetry, never interlayering the geometric forms and the actual shapes. Ida was becoming an established artist in her own right: it was a moment of triumphant exhilaration for her. It happened during a passage of devastating defeat for Georgia.

In 1927, Stieglitz had begun a public affair with the beautiful, dark-eyed Dorothy Norman, who was younger than Georgia. She volunteered at his gallery and posed for his camera; in early 1932, a new show that Stieglitz put on was full of Dorothy’s face. Georgia, whose sybilline image had become nearly as famous as her paintings, had been deposed as muse. That spring, Georgia was invited to create a mural for Radio City Music Hall. As her dealer, Stieglitz expressly forbade it. O’Keeffe flatly disobeyed him, and accepted. Publicly, he raged about her professional betrayal of him, while, privately, he continued his matrimonial betrayal of her. Georgia ignored the affair and persisted with the project. It was plagued by delayed construction, despite having a fixed deadline for the art. Finally, in November, Georgia was able to begin work. The day she arrived to start, the canvas began slowly peeling off the wall. It seemed like a message from the universe: every path she took was blocked. It seemed that she was being erased, as an artist and as a woman.

Georgia began to slide into depression. She was unable to eat or sleep; she developed a fear of water; she imagined buildings collapsing on top of her. In February, 1933, she was admitted to a hospital for psychoneurosis. Stieglitz, who had played a part in her collapse, was only allowed one weekly visit.

When Georgia emerged, Catherine’s show was over, and Ida’s was about to begin.

Georgia had always been the leader of the sisters. “She was the queen. . . . and we all loved her,” Catherine said. The younger sisters had been loyal subjects, but now, it seemed, they were claiming her throne. Georgia had earned her place as an artist through years of study, the solitary investigation of ideas, the difficult struggle to find her own voice. She had created her own style and vocabulary, of luscious shapes and dreaming colors. Her sisters had earned none of this, yet, suddenly, they were presented as her equals. Georgia had been betrayed in her marriage, by her husband, and now she was betrayed in her field, by her sisters. They were like the marathon runner who takes the shortcut by subway: suddenly her sisters were running by her side.

Blisteringly, Georgia raged at them. She cut off communication with Catherine for four years, before sending an apology letter. Singed, Catherine would eventually stop painting forever. Ida refused to stop painting or showing her work, but she did get out of Dodge. After a few years of intermittent visits and a few shows, she left New York to her sister forever. The two never reconciled. Nor did Ida ever recover the clarity and strength she’d expressed in the lighthouse series. For the rest of her painting life, Ida shifted through different styles and media. She lived in small towns throughout the Midwest, working as an artist-in-residence, art teacher, designer, sometimes as a nurse. She showed her work locally; once she won a blue ribbon at a country fair. In 1938, she painted the intriguing grisaille oil “Stargazing in Texas.” A flattened, vertiginous perspective and an illuminated sky unsettle the viewer. Strange frozen figures, as though struck by lightning, create a mysterious, emotionally charged mood. But Ida never found a style that held her focus. She was energetic and talented, but timid and indecisive. She never faced the challenge of exploring her own ideas or finding her own voice.

Ida was said to have claimed that she’d have been famous, too, if she’d had her own Stieglitz—but, though other dealers had shown her work, it never received the powerful response that Georgia’s did. Ida’s supporters suggest that the incessant moving and her demanding day jobs interfered with her creative work—but Georgia also had day jobs in the hinterlands and continued to produce. In fact, it was while in the hinterlands that she had made some of her most original work. She was never painting for local art shows but for the New York world of the avant-garde. The difference between the sisters was not one of circumstance but of essence. Stieglitz gave Georgia her start, but it was the work that made her successful. Her original, heartfelt, hard-won images overwhelmed many viewers. She was dedicated to the expression of her singular ideas, and to her formidable work ethic. Throughout her long career, Georgia rarely faltered in her dedication, producing more than two thousand works.

Who can say? Ida might have been successful if she’d been her own true supporter, as Georgia had been. An artist can only rely on herself; the world may disregard her. She can never afford to lose her focus on the goal. Ida seemed never to recover the certainty with which she painted the clean, strong forms of the lighthouse. During that long, shining moment, she was working on her own. She’d been focussed on those beams of light, deeply and intently, fully herself.

ISS Orbit to Be Adjusted for Docking With Soyuz Spacecraft

Ireland’s Rugby World Cup 2019 games to be broadcast on eir...