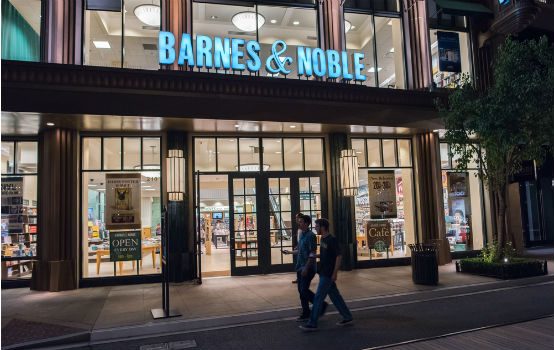 Reports of Barnes & Noble’s imminent demise have long been foretold—and not necessarily exaggerated. The bookstore has been on a downward slide for years. In 2013, its CEO resigned amid the company’s Nook expansion failure. At the time, Idea Logical’s Mike Shatzkin alleged that Barnes & Noble would not recover; it could only hope to “make the slide into oblivion more gradual.”

Five years later, Barnes & Noble is still around. It’s now outlived Borders to become the last national bookstore competing with Amazon in the retail space. But survival does not necessarily mean flourishing: at the beginning of the month, the company’s stock plunged nearly 8 percent. According to the Guardian, the bookstore has lost $1 billion in value over the past five years.

“It’s depressing to imagine that more than 600 Barnes & Noble stores might simply disappear,” New York Times columnist David Leonhardt wrote a couple weeks ago. “But the death of Barnes & Noble is now plausible.”

Visits to Barnes & Noble were one of my favorite occasions as a child. Back then, there was something nostalgic yet stately about the bookstore. It seemed like a gem of grace and sophistication, a place not just to browse but to learn. I remember distinctive elements that still set the store apart in my mind: the hunter-green wallpaper, the woodcut and art deco feel of its literary decorations, the old-fashioned chairs and quiet corners suggesting a respect and reverence for the old and the classic. The store evoked the same “feel” I got when I handled an old antique hardback. Back then, the bookstore’s coffee shop had a few tidy tables where patrons could sit, but there was no wifi. I would grab a stack of five or six books and read the first chapter of each one before deciding which I wanted to buy.

Then there was Barnes & Noble’s children’s section, with its old-fashioned Winnie the Pooh prints and large, open stage for readings and play. The children’s book section felt like a fantastical wonderland: a place of discovery, serendipity, and beauty. Even when I got too “old” for it, this was always the part I gravitated to.

Of course, it’s important for a store to update and improve its style and form. I’m not saying Barnes & Noble should have stayed in the 90s and refused to renovate. The real problem is that they never seemed to prize their own distinctive beauty, and always sought to make themselves more like technology stores rather than emulating the success of their smaller, indie-bookstore counterparts.

Do you remember the Nook? The company is still selling them, though it has been ages since I’ve seen one in-store (and even longer since I’ve met somebody who owns one). Barnes & Noble jumped on the e-reader bandwagon in 2009, hoping to compete with the Kindle and the iPad. But while Amazon and Apple were obviously and entirely digital companies, and their e-readers fit their image and model, Barnes & Noble’s Nook pursuit always felt a bit dissonant and off-color. In many ways, the Nook was the beginning of the store’s end—because it signaled that the company would always try to play “catch up” with the newest fad or trend rather than focus on its own secret sauce: physical books.

Compared to the old Barnes & Noble of my childhood, the new bookstore that just opened in Ashburn, Virginia is almost unrecognizable. It is large and minimalist, bare of decoration or color. There are only a few chairs scattered throughout, and little room to sit and read in the children’s section.

Instead, this new Barnes & Noble is half bookstore, half café: it features a souped-up Starbucks, bar, and a kitchen offering items like charcuterie and avocado toast. The theory here appears to be that, if you’re going to sit and read a book or magazine without buying it, they’re at least going to make you pay a hefty sum for wine or a croissant. But as Eater notes, “entering the restaurant business, with its notoriously low profit margins and high rate of failure, is an unlikely Hail Mary for the nation’s largest bookstore chain.” Many of the people I have seen parked at tables inside this Barnes & Noble don’t have books or magazines with them; instead, they’re plugged into computers and headphones, teleworking or doing conference calls.

Although this Barnes & Noble still hosts readings and book signings according to its website, there’s no obvious advertising for them in the store—and it’s difficult to determine where they are, considering the significant lack of sitting space. The children’s section boasts one table laden with Legos, with a few cushions surrounding it. There are no armchairs to sit and read a book with my toddler. Instead, we had to crouch on the ground next to a shelf of Dr. Seuss books in order to read together.

Perhaps it’s this—the table full of Legos but absence of chairs for reading—that best marks Barnes & Noble’s drastic transformation. For a long time now, the bookstore has seemed to emphasize everything but books: its puzzles and DVDs and records, gadgets and greeting cards and plush Harry Potter sorting hats. As one analyst told the Guardian, “The stores just look like an enormous Aladdin’s cave of all sorts of random products, including departments selling CDs and DVDs that are never crowded.”

It is sad that Barnes & Noble believes it must add all these other perks to get people to frequent their stores. It seems that, for a long time now, they’ve ceased believing in the power of their own product. Perhaps this is what really drives customers away: why go to a store that doesn’t really seem to love or understand its own telos?

It makes sense that, in this absence of love or mission, customers would increasingly turn to the indie bookstores Barnes & Noble was once driving out of business. These smaller stores still get it: although they’ve also had to be inventive in order to survive, they’ve stayed true to their mission and their product. As Guardian reporter Edward Helmore put it, “innovation is where Barnes & Noble went wrong. Other big booksellers have tackled Amazon’s onslaught by doing precisely the opposite—going back to basics and putting the books first.”

If Barnes & Noble were still a place to pause, to savor, and to experientially luxuriate in the codex itself, I don’t think it would be struggling as much as it is. If the store had put greater emphasis on book clubs and special memberships, story hours and author signings (as many indie bookstores have), it would have given readers a space that celebrates the book, its creation and its consideration, as well as the membership of bookworms. If the store had put more emphasis on hiring and training book lovers who were passionate about their product, it might have wooed the suspicious and the hesitant to buy more books. If it had invested less money in gadgetry and more in its volumes, as well as in the style and form of its shopping and reading space, it could have successfully differentiated itself from Amazon and emphasized the things that set it apart: physical interactions with physical books (and physical people, for that matter).

But as it is, everything that Barnes & Noble does today is done as well or better by someone else. You could go to its café and get a Starbucks coffee and croissant—or you could go to the nearest indie coffee shop and get higher-quality versions of the same things. Nearly every café and coffee shop offers free wifi and space to work these days. And indie bookstores usually offer both new and old books at the same (or better) prices, while providing their customers with a greater sense of passion and reverence.

Barnes & Noble has long been a place of learning and love. But in its determination to innovate, it has forgotten its telos. Which means that it won’t survive much longer unless it can rediscover what made it special in the first place.

Gracy Olmstead is a writer and journalist located outside Washington, D.C. She’s written for The American Conservative, The Week, National Review, The Federalist, and The Washington Times, among others.

Hope yet for Newcastle’s academy as 11 local lads involved in...

Gareth Southgate comfortable with criticism after England loss to Belgium