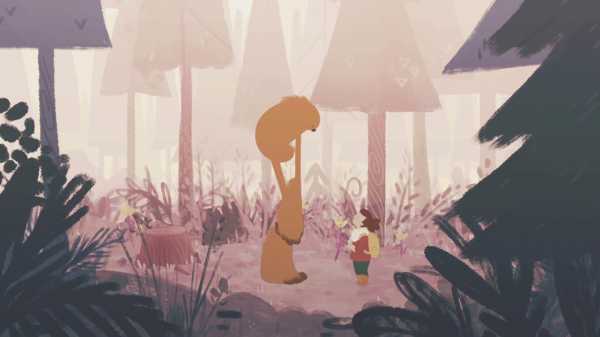 The animator Sara Litzenberger, who is twenty-three, is not yet famous, but she has recently been receiving a lot of attention: her début film, “Undiscovered,” a three-minute animated short, won awards at this year’s SXSW, Clermont-Ferrand, and Aspen film festivals. The film’s star—our forest-dwelling friend the Sasquatch—is famous, but he’s also famously elusive, and mysteriously hard to photograph. In “Undiscovered,” we learn why—and it isn’t because he’s mythical.

Litzenberger, who now works as a junior animator at Hornet, a production company in New York, made the film for a college project. Some of her earliest animations, made when she was growing up, in the suburbs just west of Chicago, took the form of Post-It Note flip books. “I’ve been drawing for forever, and I’ve always been interested in animation,” she told me recently. “If I could make my drawings move, why wouldn’t I?” In high school, she took as many art classes as she could; for college, she went to the Savannah College of Art and Design, in Georgia, and majored in animation. “I ended up being really inspired by old U.P.A. films,” she told me, including “Rooty Toot Toot” (by the great animator John Hubley, of “Mr. Magoo,” “The Adventures of Letterman,” and Georgia Hubley fame) and “Gerald McBoing Boing.” The midcentury animation studio United Productions of America was a pioneer of the limited-animation style, which employed a flat, stylized, clever aesthetic. The style “really takes it down to the bare shape,” Litzenberger said. “But also there are extra lines that are a little curly and curvy and don’t have to be. It’s fun.”

When I watched these and other wonderful old U.P.A. shorts, they reminded me of the look and feel of the “Rocky and Bullwinkle” family of cartoons, which also use limited animation; you’re especially aware of the artifice you’re experiencing, in a way that enhances the humor. The aesthetic of “Undiscovered,” Litzenberger said, was also inspired by old travel posters and the work of the midcentury Disney concept painter Eyvind Earle, who created the look for the tons-of-fun “Toot, Whistle, Plunk and Boom” and went on to paint enchanted-forest and elegant-countryside backgrounds for Disney films such as “Peter Pan” and “Sleeping Beauty.”

In “Undiscovered,” we hear plaintive ukulele, birds, and occasional crickets, and see forest scenes in the soft, earthy colors of dusk and morning. A series of humans appears, carrying cameras and walking alone; then they see the Sasquatch. His body seems to emphasize the sweet, glorious absurdity of existence. He’s tree-trunk tall, with funny tufts of fur, and he’s at once bulky and spindly—his arms and legs are floppy noodles that swoop into clublike paws. He has sparse, innocent teeth and comically teeny pinpoint eyes. Like us, he enjoys posing for photographs, and, like us, he is often disappointed by the results. How he resolves this is delightful; suffice to say, it’s the rare short film in which the happy ending involves a hipster showing up with a vintage camera.

It took a while for Litzenberger to arrive at the idea of her Sasquatch short. “I was stumped on the idea for a really long time,” she told me. She and her classmates had an assignment to create their own films in a period of several weeks, “to come up with an idea and then board it out and make it ready for production,” she said. “For the first four or five weeks, I was just waffling.” Then, one day, she was brainstorming with friends. “This idea of Sasquatch being unphotogenic came up, and I rolled with it,” she said.

For her next project, Litzenberger would like to make another three-minute animation. She’s currently working on a pitch for grant applications. Beyond that, “it would be really cool to end up directing,” she said. “Or making more short films. I kind of want to see where the wind takes me.”

Trump Promises US Will Report on Virus’ Origin Soon