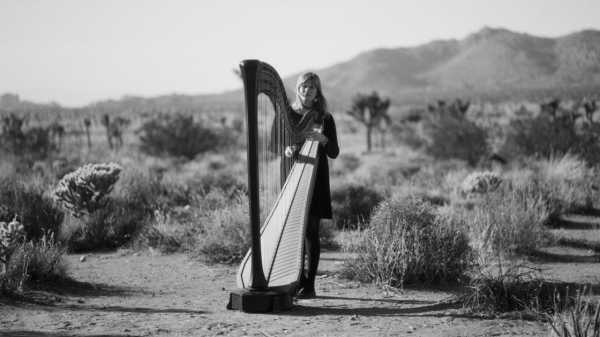 Critics and their worn-out thesauruses eventually do a number on almost every musical instrument, but the harp is perhaps the most routinely maligned by adjectives: ethereal, celestial, ghostly, spectral, delicate, feminine, angelic, soft. These are good words, and often germane, but their implications can be limiting. They suggest that the harp is merely a novelty device, to be lugged out for weddings and other fancy ceremonies—a portent of melodrama and whimsy.

Harps were excavated from burial plots in the ancient Sumerian city of Ur, which means that the instrument is close to five thousand years old. While that’s fairly young in the grand history of humanity (in 2012, researchers uncovered flutes made from bird bone and mammoth ivory, in a German cave, and estimated that they were probably between forty-two thousand and forty-three thousand years old), it feels significant in an era in which new synthesizer plug-ins are programmed, released, and then used by musicians within hours. The harp has a past: it’s been an essential part of classical orchestras since (at least) the seventeenth century, and, in the twentieth and twenty-first centuries, it was critical to a handful of groundbreaking experimental musicians, including Alice Coltrane, Yoko Ono, Björk, and the singer and harpist Joanna Newsom, who, beginning in the early aughts, incited a kind of temporary harp frenzy among indie-rock fans (and Larry King). These days, the harp is wheeled out by pop singers (Britney Spears, Lady Gaga, and Lana Del Rey have all used one) when they want to convey some mystical subtext—to suggest that what follows might not be contained exclusively by this plane.

The harpist Mary Lattimore, whose fourth LP, “Hundreds of Days,” was released by Ghostly International, last month, makes complex and expansive songs that evoke, for me, seismic emotional shifts—it’s not so much music to zone out to (though you can use it for that, too) as music to self-actualize by. Unlike Newsom, Lattimore rarely sings, but her songs still feel heavily narrative-oriented. Like all artists, she is interested in the odd and tumultuous path of a human life. Her songs track what it’s like to experience something, and then to find yourself changed by it—the strange and often puzzling way our bodies and minds rearrange themselves at unforeseeable intervals. Even the record’s title (which could refer to part of a year, or maybe just to the whole cradle-to-grave fiasco) suggests the ending of one phase, and the beginning of another.

Besides her forty-seven-string Lyon & Healy harp, Lattimore plays electric guitar, piano, the Theremini, and synthesizers, which add texture, and, on occasion, a kind of pleasing throb, like a heart recirculating blood. Much of “Hundreds of Days” was devised while Lattimore was in residence at the Headlands Center for the Arts, in the Marin Headlands, near Sausalito, California, which is the sort of place a person goes when she needs to spend some time alone, camped out at the edge of the earth. “We lived in these rambling old Victorian military houses with nineteen-fifties kitchens and weird, benevolent ghosts,” Lattimore told me recently. “The air smelled like eucalyptus trees. My studio was this large redwood barn on the hill beside a lighthouse. I took long hikes and spent a lot of hours working on music, reading books, getting quiet. I brought all of these instruments I didn’t really know how to play, like the Moog Theremini and a cheapo electric guitar and some synths. In my small house in L.A., I never want the neighbors to hear me fumbling around, but in the middle of nowhere, wearing five layers of clothing, alone in a redwood barn, it felt like there was this otherworldly nudging to get free with it.”

The cover of her album features a painting by the Philadelphia artist Becky Suss. It’s of a dreamy interior, absent of people but overloaded with elegant objects, painted and placed with precision—the sort of curated sitting room you might crave as your own, free of old mail and cat-scratching posts and last week’s recycling. Lattimore wrote “Hundreds of Days” after a cross-country move from Philadelphia to Southern California; ideas of home were on her mind. “For as much as I was loving Los Angeles, fresh and new, I was also missing Philly so deeply. I couldn’t shake it. It’s still a place that I miss to the core,” she said. Writing helped her remember her life there, and to keep it from fading—a talisman against more loss. “It feels like making a song about a place where you were, physically or mentally, is a way of holding it in your hand whenever you want to,” Lattimore explained.

Each of these pieces now feels like a little postcard—a monument to a particular place and time, and to the person Lattimore was then. That the harp sounds so holy—a pure and spindly emanation from above—gives real weight to her journey. Listening to “Hundreds of Days” often makes me think of the writer Edward Abbey, and especially his 1968 book, “Desert Solitaire: A Season in the Wilderness,” in which he recalls his time as a park ranger at Arches National Park, in eastern Utah: “I am twenty miles or more from the nearest fellow human, but instead of loneliness I feel loveliness,” Abbey writes. “Loveliness and a quiet exhalation.”

Salvadorans on TPS will now be able to stay in the...

In opioid epidemic, some cities strain to afford OD antidote

Insider Reveals Why ‘Keeping Up With the Kardashians’ Is Coming to...