Home Culture The “Simpsons” Jokes That Never Quite Made It (and a Few that... 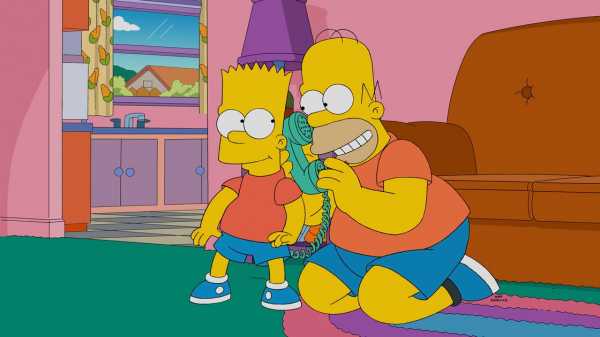 “The Simpsons” has so many running jokes—the location of Springfield, Bart’s prank calls, Burns’s hound-releasing, Lenny getting severe eye damage—but there are some that have never made it to air:

He does! We just never show it or mention it. We put the jokes in, but they always get cut. The lone vestige is one of Bart’s chalkboard gags: “The principal’s toupee is not a Frisbee.”

We thought that, every time we mentioned Marge’s father’s death, there would be a different funny cause: he got drunk and fell off a roller coaster, he was eaten by a bear at the circus, et cetera. None of these jokes was funny enough to make the final cut of the show. Finally, in Season 27, we said he died of lung cancer. Hilarious.

Sometimes I can’t fathom why jokes don’t make it into the script. For example, once we wanted Marge to be reading a news magazine about tar. (It’s a long story.) We needed a name for the magazine, and I pitched Tar Nation (as in, “What in tarnation?!”). Everyone seemed happy, except my fellow-showrunner, Al Jean.

“Nah?” echoed the writer George Meyer, incredulous. But I wasn’t mad—someday, somewhere, someone will need a name for a weekly tar magazine, and I’ve got one.

Another bit you never saw was a long scene with Lenny and Carl discussing Ted Danson’s forgotten sitcom “Becker” as if it were as great as “Star Trek.” They knew every bit of trivia about the show, called themselves “Beckies,” and were planning to attend a big “Becker” convention that weekend.

The writers’ room loved it, but you probably had to be there. The showrunner at the time walked in and cut it instantly. He also cut another bit we liked—a character named Gravy Wallace who loved gravy. That was it—Gravy Wallace loved gravy. Maybe the showrunner was right and it was stupid. But maybe Gravy could’ve been the next Disco Stu.

Occasionally on “The Simpsons,” you’ll see a scene that’s weird, even by our standards: it’s not conventionally funny, and it may have nothing to do with the story. Odds are this scene is padding. One skill I learned at Harvard was how to stretch a five-page paper into a fifty-page thesis, and this served me well when I was running the show with Al Jean. For some reason our episodes were always short, and we had to find a way to make the network minimum length: twenty minutes, twenty seconds.

One week, after editing an episode called “Lisa’s First Word,” we had a funny, touching, fast-paced “Simpsons”—but it was thirty seconds too short to air. So Al and I wrote an extra-long couch gag—it ended with the back wall of the Simpsons’ living room opening up into an elaborate Vegas stage show. (The opening credits of “Family Guy” look a lot like this couch gag. Just saying . . . ) Though invented in desperation, the extended couch joke has become a creative mainstay of the show.

While people love an extra bit at the beginning, they’re often baffled when it comes at the end. We once filled out a short show with a thirty-second cartoon called “The Adventures of Ned Flanders”:

NED FLANDERS: Knock that off, you two, it’s time for church.

NED: What? You give me one good reason.

Seconds after that aired, my father called. “What the hell was that?” he demanded. I didn’t even know he watched “The Simpsons.”

Then there’s the famous Sideshow Bob joke in “Cape Feare” that involves him stepping on an endless series of rakes. That alone was creative padding. But the show was still seven seconds short, so Al Jean said, “Let’s do it again.” We repeated the sequence exactly, and somehow turned a slapstick joke into a surreal classic.

One padding trick we rarely use anymore is Bart’s prank phone calls to Moe. They were freestanding scenes you could drop in anywhere, and they were a trademark of the show. However, these sequences were surprisingly hard to write—each one involved four separate jokes, all of which had to be clever in their dumbness.

THE PATRONS MAKE A REJOINDER: “Maybe your standards are too high!”

MOE THREATENS VENGEANCE: “You little S.O.B.! Why, when I find out who you are, I’m going to shove a sausage down your throat and stick starving dogs up your butt!”

But the main reason we stopped doing these is that they never got a laugh at our table reads. Never.

One legendary attempt at show padding has been lost to the ages. Back in 1990, a second-season episode came in much too short, so we banged out a filler piece: “Nazis on Tap.” It was supposedly a “Simpsons” cartoon short from the nineteen-forties. It seemed like “The Simpsons,” but everything was just a little different: Mr. Burns owns an aircraft plant making planes for the war effort; Bart’s spiky hair is replaced by a pointy Jughead cap; Moe the bartender is a dog, who asks, “Rrruff day at work, Homer?”

Matt Groening nixed the piece because it was too weird and too early in the series to just throw at people. I’m sure he wouldn’t have a problem with it now.

From “Springfield Confidential: Jokes, Secrets, and Outright Lies from a Lifetime Writing for ‘The Simpsons’ ,” by Mike Reiss with Mathew Klickstein.